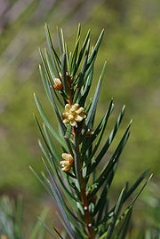 Encyclopedia
Keteleeria is a genus of three species of coniferous
Pinophyta
The conifers, division Pinophyta, also known as division Coniferophyta or Coniferae, are one of 13 or 14 division level taxa within the Kingdom Plantae. Pinophytes are gymnosperms. They are cone-bearing seed plants with vascular tissue; all extant conifers are woody plants, the great majority being...
tree
Tree
A tree is a perennial woody plant. It is most often defined as a woody plant that has many secondary branches supported clear of the ground on a single main stem or trunk with clear apical dominance. A minimum height specification at maturity is cited by some authors, varying from 3 m to...
s in the family Pinaceae
Pinaceae
Pinaceae are trees or shrubs, including many of the well-known conifers of commercial importance such as cedars, firs, hemlocks, larches, pines and spruces. The family is included in the order Pinales, formerly known as Coniferales. Pinaceae are supported as monophyletic by its protein-type sieve...
, related to the genera Nothotsuga
Nothotsuga
Nothotsuga is a genus of coniferous trees in the family Pinaceae, in many respects intermediate between the genera Keteleeria and Tsuga. It is distinguished from Tsuga by the larger, erect cones with exserted bracts, and male cones in umbels, and from Keteleeria by the shorter leaves and smaller...
and Pseudolarix
Pseudolarix
Pseudolarix is a monotypic genus in the family Pinaceae. The sole species, Pseudolarix amabilis is commonly known as Golden Larch, though it is not a true larch , being more closely related to Keteleeria, Abies and Cedrus...
. It is distinguished from Nothotsuga by the much larger cones
Conifer cone
A cone is an organ on plants in the division Pinophyta that contains the reproductive structures. The familiar woody cone is the female cone, which produces seeds. The male cones, which produce pollen, are usually herbaceous and much less conspicuous even at full maturity...
, and from Pseudolarix by the evergreen
Evergreen
In botany, an evergreen plant is a plant that has leaves in all seasons. This contrasts with deciduous plants, which completely lose their foliage during the winter or dry season.There are many different kinds of evergreen plants, both trees and shrubs...
leaves
Leaf
A leaf is an organ of a vascular plant, as defined in botanical terms, and in particular in plant morphology. Foliage is a mass noun that refers to leaves as a feature of plants....
and the cones not disintegrating readily at maturity. All three genera share the unusual feature of male cones produced in umbel
Umbel
An umbel is an inflorescence which consists of a number of short flower stalks which are equal in length and spread from a common point, somewhat like umbrella ribs....
s of several together from a single bud, and also in their ability, very rare in the Pinaceae, of being able to coppice.

The genus is found in southern China
China
Chinese civilization may refer to:* China for more general discussion of the country.* Chinese culture* Greater China, the transnational community of ethnic Chinese.* History of China* Sinosphere, the area historically affected by Chinese culture...
(from Shaanxi
Shaanxi
' is a province in the central part of Mainland China, and it includes portions of the Loess Plateau on the middle reaches of the Yellow River in addition to the Qinling Mountains across the southern part of this province...
south to Guangdong
Guangdong
Guangdong is a province on the South China Sea coast of the People's Republic of China. The province was previously often written with the alternative English name Kwangtung Province...
and Yunnan
Yunnan
Yunnan is a province of the People's Republic of China, located in the far southwest of the country spanning approximately and with a population of 45.7 million . The capital of the province is Kunming. The province borders Burma, Laos, and Vietnam.Yunnan is situated in a mountainous area, with...
), Taiwan
Taiwan
Taiwan , also known, especially in the past, as Formosa , is the largest island of the same-named island group of East Asia in the western Pacific Ocean and located off the southeastern coast of mainland China. The island forms over 99% of the current territory of the Republic of China following...
, Hainan
Hainan
Hainan is the smallest province of the People's Republic of China . Although the province comprises some two hundred islands scattered among three archipelagos off the southern coast, of its land mass is Hainan Island , from which the province takes its name...
, northern Laos
Laos
Laos Lao: ສາທາລະນະລັດ ປະຊາທິປະໄຕ ປະຊາຊົນລາວ Sathalanalat Paxathipatai Paxaxon Lao, officially the Lao People's Democratic Republic, is a landlocked country in Southeast Asia, bordered by Burma and China to the northwest, Vietnam to the east, Cambodia to the south and Thailand to the west...
and Vietnam
Vietnam
Vietnam – sometimes spelled Viet Nam , officially the Socialist Republic of Vietnam – is the easternmost country on the Indochina Peninsula in Southeast Asia. It is bordered by China to the north, Laos to the northwest, Cambodia to the southwest, and the South China Sea –...
.

They are evergreen trees reaching 35 m tall. The leaves are flat, needle-like, 1.5-7 cm long and 2-4 mm broad. The cones are erect, 6-22 cm long, and mature in about 6-8 months after pollination; cone size and scale shape is very variable within all three species.

The variability of the cones has led in the past to the description of several additional species (up to 16 'species' have been named), but most authorities now only accept three species. For a different viewpoint, see the Flora of China link below.