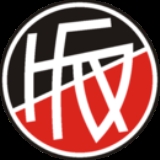 Encyclopedia
Karlsruher FV is a German association football club
Football in Germany
Association football is the most popular sport in Germany. The German Football Association is the sport's national governing body, with 6.6 million members organized in over 26,000 football clubs. There is a league system, with the 1. and 2. Bundesliga on top, and the winner of the first...
that plays in Karlsruhe
Karlsruhe
The City of Karlsruhe is a city in the southwest of Germany, in the state of Baden-Württemberg, located near the French-German border.Karlsruhe was founded in 1715 as Karlsruhe Palace, when Germany was a series of principalities and city states...
, Baden-Württemberg
Baden-Württemberg
Baden-Württemberg is one of the 16 states of Germany. Baden-Württemberg is in the southwestern part of the country to the east of the Upper Rhine, and is the third largest in both area and population of Germany's sixteen states, with an area of and 10.7 million inhabitants...
. Established on 17 November 1891, KFV was a founding member
Founding Clubs of the DFB
The DFB was formed January 28, 1900 in Leipzig. The commonly accepted number of founding clubs represented at the inaugural meeting is 86, but this number is uncertain. The vote held to establish the association was 62:22 in favour . Some delegates present represented more than one club, but may...
of the German Football Association
German Football Association
The German Football Association is the governing body of football in Germany. A founding member of both FIFA and UEFA, the DFB organises the German football leagues, including the national league, the Bundesliga, and the men's and women's national teams. The DFB is based in Frankfurt and is...
(Deutscher Fussball Bund or German Football Association) in 1900. The team went on to capture the national championship in 1910 with a 1–0 victory over Holstein Kiel
Holstein Kiel
Holstein Kiel is a German association football and sports club based in the city of Kiel, Schleswig-Holstein. Through the 1910s and 1920s the club was a dominant side in northern Germany winning six regional titles and finishing as runners-up another six times...
. Folding in 2004, the club reformed in 2007.

KFV co-founder Walther Bensemann
Walther Bensemann
Walther Bensemann was a German pioneer of football and founder of the country's major sports publication, Kicker....
established Internationalen FC Karlsruhe, the first football team in south Germany, in 1889. This club became part of KFV in 1894. He also had a hand in founding the Frankfurter Kickers a predecessor side to Eintracht Frankfurt
Eintracht Frankfurt
Eintracht Frankfurt is a German sports club, based in Frankfurt, Hesse that is best known for its association football club.- Club origins :...
. As well, Bensemann established kicker
Kicker (sports magazine)
kicker Sportmagazin is Germany's leading sports magazine and is focused primarily on football. The magazine was founded in 1920 by German football pioneer Walther Bensemann and is published twice a week, usually Monday and Thursday, in Nuremberg...
, Germany's first football magazine.

KFV was one of Germany's most successful sides in the years before the First World War. The club captured the South German title eight times from 1901 to 1912, leading to national final appearances in 1905, 1910, and 1912. KFVs championship was earned under the direction of English coach William Townley
William Townley
William "Billy" Townley, , was an English football player and coach.He scored the first hat-trick in the history of the FA Cup final, but his lasting legacy is defined as an important pioneer of the game in Germany and as a journeyman coach on the continent.-Playing career:Townley's career as a...
, a prominent figure in the early history of the game in Germany.

KFV figures in the strange story of Germany's first national championship in 1903 which was won by VfB Leipzig in a 7:2 victory over DFC Prag
DFC Prag
The Deutscher Fussball Club Prag was a German association football club that played in the city of Prague in what is today the Czech Republic, but was at the time of the club's founding on 25 May 1896, part of Bohemia in the Austro-Hungarian Empire...
ue. The Karlruhers were scheduled to play a semi-final match against Prag in Leipzig
Leipzig
Leipzig Leipzig has always been a trade city, situated during the time of the Holy Roman Empire at the intersection of the Via Regia and Via Imperii, two important trade routes. At one time, Leipzig was one of the major European centres of learning and culture in fields such as music and publishing...
, but cancelled their travel plans when they received a telegram – allegedly from the German Football Association
German Football Association
The German Football Association is the governing body of football in Germany. A founding member of both FIFA and UEFA, the DFB organises the German football leagues, including the national league, the Bundesliga, and the men's and women's national teams. The DFB is based in Frankfurt and is...
(Deutscher Fussball Bund or German football Association) – indicating that the game had been re-scheduled. Prag was awarded a win by forfeit when their opponents failed to show, and so made an uncontested advance to the final in spite of vehement protests by KFV. It has never been discovered who sent the telegram.

Denied a place in the national final,

Karlsruhe did manage to arrange to challenge Leipzig the following year in a match representing the contest that might have been, but lost the game 3–7.

KFV also played a key role in the incomplete national final of 1904. Beaten 1:6 by Britannia Berlin in a semi-final match played in Berlin, Karlsruhe protested the result as under league rules the match was to have been played at a neutral venue. Ultimately, the DFB cancelled the final and the Viktoria trophy was not awarded that year.

Südkreis-Liga
Südkreis-Liga
The Südkreis-Liga was the highest association football league in the German Kingdom of Württemberg, Grand Duchy of Baden, the Province of Hohenzollern and Alsace-Lorraine from 1908 to 1918...
, which it won in 1910, 1911 and 1912. In 1909, Phönix Karlsruhe, known today as Karlsruher SC
Karlsruher SC
Karlsruher SC is a German association football club, based in Karlsruhe, Baden-Württemberg. KSC rose out of the consolidation of a number of predecessor clubs. They currently play in the 2...
, brought the city its first national championship. KFV's win the following year makes Karlsruhe one of only three cities in Germany that have been home to two or more national football champions. The others are Munich
Munich
Munich The city's motto is "" . Before 2006, it was "Weltstadt mit Herz" . Its native name, , is derived from the Old High German Munichen, meaning "by the monks' place". The city's name derives from the monks of the Benedictine order who founded the city; hence the monk depicted on the city's coat...
(FC Bayern Munich
FC Bayern Munich
FC Bayern Munich , is a German sports club based in Munich, Bavaria. It is best known for its professional football team, which is the most successful football club in Germany, having won 22 national titles and 15 cups....
and TSV 1860 München
TSV 1860 München
Turn- und Sportverein München von 1860, commonly known as TSV 1860 München or 1860 Munich, is a German sports club based in Munich, Bavaria. The club's football team plays in the Second Bundesliga, after relegation from the Bundesliga following the 2003–04 season...
) and Berlin (Union 92 Berlin, BFC Viktoria 1889, Hertha BSC). While playing for the national team in 1912, KFVs Gottfried Fuchs
Gottfried Fuchs
Gottfried Fuchs was a German footballer. A German Jew, he fled Germany because of The Holocaust and emigrated to Canada...
scored 10 goals in a contest against Russia to set a German international match record that still stands.

From 1925 to 1931 Jimmy Lawrence
Jimmy Lawrence
James "Jimmy" Lawrence was a Scottish football player and later manager. A goalkeeper he played for Newcastle United between 1904 and 1921....
, the record holding former Newcastle United goal keeper and Preston North End manager relocated to Germany to manage Karlsruher FV. With the club he won the regional championships of Württemberg/Baden in 1926 and of Baden in 1928, 1929 and 1931 which qualified the club to participate in the matches for the German football championship in those years.

In 1933, Karlsruher FV took up play in the Gauliga Baden
Gauliga Baden
The Gauliga Baden was the highest football league in the German state of Baden from 1933 to 1945. Shortly after the formation of the league, the Nazis reorganised the administrative regions in Germany, and the Gau Baden replaced the state Baden....
, one of the sixteen first division leagues established in the re-organization of German football under the Third Reich. The club was relegated in 1937, but made a prompt return to the top flight after a one year absence. Sent down again in 1941 they came back to play the 1943–44 season, after which the rump of the division struggled through just one more truncated season as Allied forces rolled through Germany in the last days of World War II.

KFV played in the Oberliga Süd
Oberliga Süd (1945-63)
The Oberliga Süd was the highest level of the German football league system in the south of Germany from 1945 until the formation of the Bundesliga in 1963.It covered the three states of Bavaria, Baden-Württemberg and Hessen.-Overview:...
where they finished dead last, five points in back of rivals Phönix Karlsruhe. Not immediately relegated as the league was being re-structured, the club played another season in the Oberliga Süd, and this time both Karlsruhe sides were relegated, although FV did manage to finish ahead of Phönix.

Karlsruher FV emerged in the 2nd Oberliga Süd
2nd Oberliga Süd
The 2nd Oberliga Süd was the second-highest level of the German football league system in the south of Germany from 1950 until the formation of the Bundesliga in 1963. It covered the three states of Bavaria, Baden-Württemberg and Hessen.-Overview:...
in 1951–52 and played second division football there until being relegated in 1957. The club won two titles in the Amateurliga Nordbaden
Amateurliga Nordbaden
The Amateurliga Nordbaden was the highest football league in the region of the Nordbaden FA and the third tier of the German football league system from its inception in 1945 to the formation of the Oberliga Baden-Württemberg and the Verbandsliga Nordbaden below it in 1978.- Overview :The...
(III) in 1952 and 1974 but after this the team fell to tier V Kreisliga play before finally being disqualified from league operations in October 2004, after collapsing financially.