Encyclopedia
Karatepe is a late Hittite
History of the Hittites
Hittites were an ancient people who spoke an Indo-European language and established a kingdom centered in Hattusa in northern Anatolia from the 18th century BC. In the 14th century BC, the Hittite Kingdom was at its height, encompassing central Anatolia, south-western Syria as far as Ugarit, and...
fortress and open air museum
Open air museum
An open-air museum is a distinct type of museum exhibiting its collections out-of-doors. The first open-air museums were established in Scandinavia towards the end of the nineteenth century, and the concept soon spread throughout Europe and North America. Open-air museums are variously known as...
in Osmaniye Province
Osmaniye Province
Osmaniye Province is a Turkish province located in southern Turkey. It became a province in 1996. The province was part of Adana Province. It covers an area of 3,767 km² and has a population of 479,221 . The province is situated in Çukurova, a geographical, economical and cultural region.The...
in southern Turkey
Turkey
Turkey , known officially as the Republic of Turkey , is a Eurasian country located in Western Asia and in East Thrace in Southeastern Europe...
lying at a distance of about 23 km from the district center of Kadirli
Kadirli
Kadirli , is a town and district of Osmaniye Province in the Mediterranean region of Turkey. It is located in the Çukurova plain, from the large city of Osmaniye...
. It is sited in the Taurus Mountains
Taurus Mountains
Taurus Mountains are a mountain complex in southern Turkey, dividing the Mediterranean coastal region of southern Turkey from the central Anatolian Plateau. The system extends along a curve from Lake Eğirdir in the west to the upper reaches of the Euphrates and Tigris rivers in the east...
, on the right bank of the Ceyhan River. The site is contained within Karatepe-Arslantaş National Park. 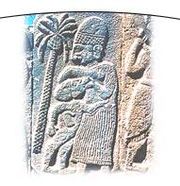 The place was an ancient city of Cilicia
Cilicia
In antiquity, Cilicia was the south coastal region of Asia Minor, south of the central Anatolian plateau. It existed as a political entity from Hittite times into the Byzantine empire...
, which controlled a passage from eastern Anatolia
Anatolia
Anatolia is a geographic and historical term denoting the westernmost protrusion of Asia, comprising the majority of the Republic of Turkey...
to the north Syrian plain. It became an important Neo-Hittite
Neo-Hittite
The states that are called Neo-Hittite, or more recently Syro-Hittite, were Luwian, Aramaic and Phoenician-speaking political entities of the Iron Age northern Syria and southern Anatolia that arose following the collapse of the Hittite Empire around 1180 BC and lasted until roughly 700 BC...
center after the collapse of the Hittite Empire in the late 12th century BCE. Relics found here include vast historic tablets, statues and ruins, even two monumental gates with reliefs on the sills depicting hunting and warring and a boat with oars; pillars of lions and sphinxes flank the gates.

The site's eighth-century BCE bilingual inscription
Bilingual inscription
In epigraphy, a bilingual is an inscription that is extant in two languages . Bilinguals are important for the decipherment of ancient writing systems.Important bilinguals include:...
s, in Phoenician and Hieroglyphic Luwian
Hieroglyphic Luwian
Hieroglyphic Luwian is a variant of the Luwian language, recorded in official and royal seals and a small number of monumental inscriptions. It is written in a hieroglyphic script known as Anatolian hieroglyphs...
, which trace the kings of Adana
Adana
Adana is a city in southern Turkey and a major agricultural and commercial center. The city is situated on the Seyhan River, 30 kilometres inland from the Mediterranean, in south-central Anatolia...
from the "house of Mopsos
Mopsus
Mopsus or Mopsos was the name of two famous seers in Greek mythology. A historical/legendary Mopsus was the founder of a house in power at widespread sites in the coastal plains of Pamphylia and Cilicia during the early Iron Age.-Son of Manto and Rhacius or Apollo:Mopsus, a celebrated seer and...
", given in Hieroglyphic Luwian as Moxos and in Phoenician as Mopsos in the form mps, have served archaeologists as a Rosetta stone
Rosetta Stone
The Rosetta Stone is an ancient Egyptian granodiorite stele inscribed with a decree issued at Memphis in 196 BC on behalf of King Ptolemy V. The decree appears in three scripts: the upper text is Ancient Egyptian hieroglyphs, the middle portion Demotic script, and the lowest Ancient Greek...
for deciphering Hieroglyphic Luwian.
According to a 2010 ZDF
ZDF
Zweites Deutsches Fernsehen , ZDF, is a public-service German television broadcaster based in Mainz . It is run as an independent non-profit institution, which was founded by the German federal states . The ZDF is financed by television licence fees called GEZ and advertising revenues...
documentary featuring the writer and translator Raoul Schrott
Raoul Schrott
Prof. Dr. Raoul Schrott, is an Austrian poet, writer, literary critic, translator and broadcast personality.Schrott was deeply influenced by the rich cultural atmosphere of his hometown, Landeck in Tyrol...
, the fortress and surrounding landscape at Karatepe significantly match Homer's descriptions of Troy
Troy
Troy was a city, both factual and legendary, located in northwest Anatolia in what is now Turkey, southeast of the Dardanelles and beside Mount Ida...
in the Iliad
Iliad
The Iliad is an epic poem in dactylic hexameters, traditionally attributed to Homer. Set during the Trojan War, the ten-year siege of the city of Troy by a coalition of Greek states, it tells of the battles and events during the weeks of a quarrel between King Agamemnon and the warrior Achilles...
. According to this theory, Homer may have used his knowledge of the legend of Troy and combined it into historical fiction, using his own experiences and access to writings as a scribe
Scribe
A scribe is a person who writes books or documents by hand as a profession and helps the city keep track of its records. The profession, previously found in all literate cultures in some form, lost most of its importance and status with the advent of printing...
in the service of the Assyria
Assyria
Assyria was a Semitic Akkadian kingdom, extant as a nation state from the mid–23rd century BC to 608 BC centred on the Upper Tigris river, in northern Mesopotamia , that came to rule regional empires a number of times through history. It was named for its original capital, the ancient city of Assur...
ns in Karatepe.

After the site was discovered in 1946, Karatepe was excavated from 1947 to 1957 by a team led by Helmuth Theodor Bossert, revealing the ruins of the walled city of king Azatiwataš.
Restoration work was then carried on for many years, which included some further soundings.
In the late 1990s, archaeological work, now led by Halet Çambel,
was conducted on a palace at the site.
Estimates for the dating of Azatiwataš rule have ranged from the early
8th century BCE to the early 7th century BCE.

In the 2004 exploration of Mars, "Karatepe" was the name given to a site designated for entering the Endurance crater
Endurance (crater)
Endurance is an impact crater on Mars that was visited by the Opportunity rover from May until December 2004. Mission scientists named the crater after the ship Endurance that sailed to the Antarctic in an exploration voyage organized by Ernest Shackleton.The rover entered the crater interior on...
to investigate the layering of the bedrock.