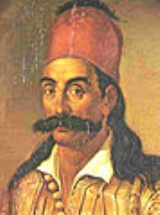 Did Georgios Karaiskakis has a little brother or any childs?
More

Encyclopedia
Georgios Karaiskakis born Georgios Iskos (January 23, 1780 or January 23, 1782 – April 23, 1827) was a famous Greek
Greeks
The Greeks, also known as the Hellenes , are a nation and ethnic group native to Greece, Cyprus and neighboring regions. They also form a significant diaspora, with Greek communities established around the world....
klepht
Klepht
Klephts were self-appointed armatoloi, anti-Ottoman insurgents, and warlike mountain-folk who lived in the countryside when Greece was a part of the Ottoman Empire...
, armatolos
Armatoloi
Armatoloi , were Greek Christian irregular soldiers, or militia, commissioned by the Ottomans to enforce the Sultan's authority within an administrative district called an Armatoliki...
, military commander, and a hero of the Greek War of Independence
Greek War of Independence
The Greek War of Independence, also known as the Greek Revolution was a successful war of independence waged by the Greek revolutionaries between...
.

Known as “The Nun’s Son” and “Gypsy” (because of his dark complexion), at a very early age he became a klepht
Klepht
Klephts were self-appointed armatoloi, anti-Ottoman insurgents, and warlike mountain-folk who lived in the countryside when Greece was a part of the Ottoman Empire...
in the service of Katsantonis, a famous local Agrafiote
Agrafa
Agrafa is a mountainous region in Evrytania and Karditsa prefectures in mainland Greece, consisting mainly of small villages. It is the southernmost part of the Pindus range...
brigand captain. He excelled as a klepht - agile, cunning, brave and reckless - and rose quickly through the ranks, eventually becoming a protopalikaro, or lieutenant.

At the age of fifteen he was captured by the troops of Ali Pasha
Ali Pasha
Ali Pasha of Tepelena or of Yannina, surnamed Aslan, "the Lion", or the "Lion of Yannina", Ali Pashë Tepelena was an Ottoman Albanian ruler of the western part of Rumelia, the Ottoman Empire's European territory which was also called Pashalik of Yanina. His court was in Ioannina...
and imprisoned at Ioannina
Ioannina
Ioannina , often called Jannena within Greece, is the largest city of Epirus, north-western Greece, with a population of 70,203 . It lies at an elevation of approximately 500 meters above sea level, on the western shore of lake Pamvotis . It is located within the Ioannina municipality, and is the...
. Ali Pasha, impressed by Karaiskakis’s courage and intelligence, and sensing his worth as a fighter, released him from prison and put him in the care of his personal bodyguards. He served as a bodyguard to Ali Pasha for a few years before losing favour with the Ottoman warlord and fleeing into the mountains to continue life as a klepht. 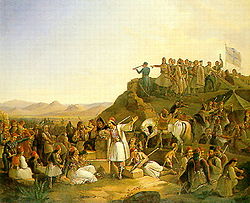 During the early stages of the war, Karaiskakis served in the militia
Militia
The term militia is commonly used today to refer to a military force composed of ordinary citizens to provide defense, emergency law enforcement, or paramilitary service, in times of emergency without being paid a regular salary or committed to a fixed term of service. It is a polyseme with...
in the Morea
Morea
The Morea was the name of the Peloponnese peninsula in southern Greece during the Middle Ages and the early modern period. It also referred to a Byzantine province in the region, known as the Despotate of Morea.-Origins of the name:...
(Peloponnese
Peloponnese
The Peloponnese, Peloponnesos or Peloponnesus , is a large peninsula , located in a region of southern Greece, forming the part of the country south of the Gulf of Corinth...
), where he participated in the intrigues that divided the Greek leadership. Nonetheless, he recognized the necessity of providing Greece
Greece
Greece , officially the Hellenic Republic , and historically Hellas or the Republic of Greece in English, is a country in southeastern Europe....
with a stable government and was a supporter of Ioannis Kapodistrias
Ioannis Kapodistrias
Count Ioannis Antonios Kapodistrias |Academy of Athens]] Critical Observations about the 6th-Grade History Textbook"): "3.2.7. Σελ. 40: Δεν αναφέρεται ότι ο Καποδίστριας ήταν Κερκυραίος ευγενής." "...δύο ιστορικούς της Aκαδημίας κ.κ...
who would later become Greece's first head of state.

Karaiskakis's reputation grew during the middle and latter stages of the war. He helped to lift the first siege of Missolonghi in 1823, and did his best to save the town from its second siege in 1826.

That same year, he was appointed commander-in-chief of the Greek patriotic forces in Rumeli
Central Greece
Continental Greece or Central Greece , colloquially known as Roúmeli , is a geographical region of Greece. Its territory is divided into the administrative regions of Central Greece, Attica, and part of West Greece...
, achieving a mixed response: while failing to cooperate effectively with other leaders of the independence movement or with the foreign sympathizers fighting alongside the Greeks, he gained some military successes against the Ottomans
Ottoman Empire
The Ottoman EmpireIt was usually referred to as the "Ottoman Empire", the "Turkish Empire", the "Ottoman Caliphate" or more commonly "Turkey" by its contemporaries...
.

His most famous victory was at Arachova
Arachova
Arachova is a town and a former municipality in the western part of Boeotia, Greece. Since the 2011 local government reform it is part of the municipality Distomon - Arachova - Antikyra, according the programme Kallikrates, of which it is a municipal unit....
, where his army together with other klephtes leaders such as Dimitrios Makris
Dimitrios Makris
Dimitrios Makris was a Greek chief klepht, armatole military commander and fighter of the 1821 revolution. He was a member of Filiki Eteria and one of the most powerful chieftains in West Central Greece.-Early life:...
, crushed a force of Turkish
Ottoman Turks
The Ottoman Turks were the Turkish-speaking population of the Ottoman Empire who formed the base of the state's military and ruling classes. Reliable information about the early history of Ottoman Turks is scarce, but they take their Turkish name, Osmanlı , from the house of Osman I The Ottoman...
and Albanian
Albanians
Albanians are a nation and ethnic group native to Albania and neighbouring countries. They speak the Albanian language. More than half of all Albanians live in Albania and Kosovo...
troops under Mustafa Bey and Kehagia Bey. Victories such as the one at Arachova were especially welcome amid the disasters that were occurring elsewhere.

In 1827, Karaiskakis participated in the failed attempt to raise the siege of Athens
Athens
Athens , is the capital and largest city of Greece. Athens dominates the Attica region and is one of the world's oldest cities, as its recorded history spans around 3,400 years. Classical Athens was a powerful city-state...
, and attempted to prevent the massacre of the Turkish garrison stationed in the fort of Saint Spyridon
Saint Spyridon
Saint Spyridon, Bishop of Trimythous also sometimes written Saint Spiridon is a saint honoured in both the Eastern and Western Christian traditions.-Life:...
.

He was killed in action on his Greek name day, 23 April 1827, after being fatally wounded by a rifle shell in battle. Karaiskaki Stadium
Karaiskakis Stadium
Karaiskakis Stadium is in the Neo Faliro area of Piraeus, Greece. It is the home ground of Olympiacos F.C. and is named after Georgios Karaiskakis , hero of the Greek War of Independence, who was mortally wounded near the area....
in Neo Faliro
Faliro
Faliro is a seaside suburb 8 km southwest of downtown Athens. There are two communities sharing the name: Palaio and Neo Faliro. Palaio Faliro is a municipality, whereas Neo Faliro is part of the town of Piraeus...
, Piraeus
Piraeus
Piraeus is a city in the region of Attica, Greece. Piraeus is located within the Athens Urban Area, 12 km southwest from its city center , and lies along the east coast of the Saronic Gulf....
is named after him as he was mortally wounded in the area. According to Karaiskakis's expressed desire to be buried on the island of Salamis
Salamis Island
Salamis , is the largest Greek island in the Saronic Gulf, about 1 nautical mile off-coast from Piraeus and about 16 km west of Athens. The chief city, Salamina , lies in the west-facing core of the crescent on Salamis Bay, which opens into the Saronic Gulf...
when he died, he was buried at the church of Saint Dimitrios on Salamis .