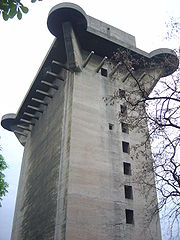 Flak towers were 8 complexes of large, above-ground, anti-aircraft
Anti-aircraft warfare
NATO defines air defence as "all measures designed to nullify or reduce the effectiveness of hostile air action." They include ground and air based weapon systems, associated sensor systems, command and control arrangements and passive measures. It may be to protect naval, ground and air forces...
gun blockhouse towers constructed in the cities of Berlin (3), Hamburg (2), and Vienna (3) from 1940 onwards.

They were used by the Luftwaffe
Luftwaffe
Luftwaffe is a generic German term for an air force. It is also the official name for two of the four historic German air forces, the Wehrmacht air arm founded in 1935 and disbanded in 1946; and the current Bundeswehr air arm founded in 1956....
to defend against Allied
Allies of World War II
The Allies of World War II were the countries that opposed the Axis powers during the Second World War . Former Axis states contributing to the Allied victory are not considered Allied states...
air raid
Strategic bombing during World War II
Strategic bombing during World War II is a term which refers to all aerial bombardment of a strategic nature between 1939 and 1945 involving any nations engaged in World War II...
s on these cities during World War II
World War II
World War II, or the Second World War , was a global conflict lasting from 1939 to 1945, involving most of the world's nations—including all of the great powers—eventually forming two opposing military alliances: the Allies and the Axis...
. They also served as air-raid shelters for tens of thousands of people and to coordinate air defence.

After the RAF's raid on Berlin in 1940, Adolf Hitler
Adolf Hitler
Adolf Hitler was an Austrian-born German politician and the leader of the National Socialist German Workers Party , commonly referred to as the Nazi Party). He was Chancellor of Germany from 1933 to 1945, and head of state from 1934 to 1945...
ordered the construction of 3 massive flak towers to defend the capital from air attack. These towers were each supported by a radar installation that had a retractable radar dish (the dish was retracted behind a thick concrete and steel dome in order to prevent damage in an air raid).

The flak towers, the design of which Hitler took personal interest in and even made some sketches for, were constructed in a mere 6 months. The priority of the project was such that the German national rail schedule was altered to facilitate the shipment of concrete, steel and lumber to the construction sites.

With concrete walls up to 3.5 metres thick, flak towers were considered to be invulnerable to attack with the usual ordnance carried by Allied bombers, though it is unlikely that they would have withstood Grand Slam bomb
Grand Slam bomb
The Grand Slam was a 22,000 lb earthquake bomb used by RAF Bomber Command against strategic targets during the Second World War.Known officially as the Bomb, Medium Capacity, 22,000 lb, it was a scaled up version of the Tallboy bomb and closer to the original size that the bombs' inventor,...
s which successfully penetrated much thicker reinforced concrete
Reinforced concrete
Reinforced concrete is concrete in which reinforcement bars , reinforcement grids, plates or fibers have been incorporated to strengthen the concrete in tension. It was invented by French gardener Joseph Monier in 1849 and patented in 1867. The term Ferro Concrete refers only to concrete that is...
. Aircraft generally appeared to have avoided the flak towers.

The towers were able to sustain a rate of fire of 8000 rounds per minute from their multi-level guns, with a range of up to 14 km in a full 360-degree field of fire. However only the 128 mm guns had effective range to defend against the RAF heavy bombers. The 3 flak towers around the outskirts of Berlin created a triangle of formidable anti-aircraft fire that covered the centre of Berlin.

The flak towers had also been designed with the idea of using the above-ground bunkers as a civilian shelter, with room for 10,000 civilians, and even a hospital ward, inside. The towers, during the fall of Berlin
Battle of Berlin
The Battle of Berlin, designated the Berlin Strategic Offensive Operation by the Soviet Union, was the final major offensive of the European Theatre of World War II....
, formed their own communities, with up to 30,000 or more Berliners taking refuge in a single tower during the battle. These towers, much like the keep
Keep
A keep is a type of fortified tower built within castles during the Middle Ages by European nobility. Scholars have debated the scope of the word keep, but usually consider it to refer to large towers in castles that were fortified residences, used as a refuge of last resort should the rest of the...
s of medieval castles, were some of the safest places in a fought-over city, and so the flak towers were some of the last places to surrender to USSR forces, eventually being forced to capitulate as supplies dwindled.

The Soviets, in their assault on Berlin, found it difficult to inflict significant damage on the flak towers, even with some of the largest Soviet guns, such as the 203 mm howitzers. Soviet forces generally manoeuvered around the towers, and eventually sent in envoys to seek their submission. Unlike much of Berlin, the towers tended to be fully stocked with ammunition and supplies, and the gunners even used their anti-aircraft 20 mm cannons to defend against assault by ground units. The Zoo Tower was one of the last points of defence, with German armoured units rallying near it at Tiergarten
Tiergarten
Tiergarten is a locality within the borough of Mitte, in central Berlin . Notable for the great and homonymous urban park, before German reunification, it was a part of West Berlin...
, before trying to break out of the encircling Soviet Red Army.

For a time after the war, the conversion to representative objects with decorated facades was planned. After the war was lost, the demolition of the towers was in most cases unfeasible and many remain to this day.

Each flak tower complex consisted of:

The evaluation of even larger Battery Towers was commissioned by Adolf Hitler
Adolf Hitler
Adolf Hitler was an Austrian-born German politician and the leader of the National Socialist German Workers Party , commonly referred to as the Nazi Party). He was Chancellor of Germany from 1933 to 1945, and head of state from 1934 to 1945...
. These would have been three times the size and firepower of flak towers.

Both towers were covered over and now appear to be natural hills in Volkspark Friedrichshain
Volkspark Friedrichshain
Volkspark Friedrichshain is a large urban park on the border of the Berlin neighborhoods of Friedrichshain and Prenzlauer Berg. The oldest public park in Berlin, at 52 hectares, it is also the third-largest, after Tempelhofer Park and the Tiergarten .-History:The park was originally conceived by...
. The G-Tower, known as Mont Klamott (Rubble Mountain) in Berlin, was the inspiration for songs by singer-songwriter
Singer-songwriter
Singer-songwriters are musicians who write, compose and sing their own musical material including lyrics and melodies. As opposed to contemporary popular music singers who write their own songs, the term singer-songwriter describes a distinct form of artistry, closely associated with the...
Wolf Biermann
Wolf Biermann
Karl Wolf Biermann is a German singer-songwriter and former East German dissident.-Early life:Biermann's father, who worked on the Hamburg docks, was a German Jew and a member of the German Resistance....
and the rock band
Rock Band
Rock Band is a music video game developed by Harmonix Music Systems, published by MTV Games and Electronic Arts. It is the first title in the Rock Band series. The PlayStation 3 and Xbox 360 versions were released in the United States on November 20, 2007, while the PlayStation 2 version was...
Silly
Silly (band)
Silly is a German rock band. Founded in East Germany in the year 1978, Silly was one of the country's most popular music acts, and was well known for its charismatic lead singer Tamara Danz. Her death in 1996 ended the band's recording career for 14 years...
.


This tower, containing six levels below the rooftop, includes in its design, as part of its air-raid shelter, two identical spaces for protection against gas attacks, one on the first floor (above ground level) and the other on the second floor. Both in Tower 1, they are about 300 sq. m. (3,230 sq. ft.) in area, and have six windows (openings in the wall).