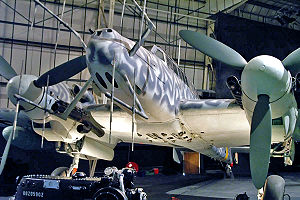 Lichtenstein radar
Radar
Radar is an object-detection system which uses radio waves to determine the range, altitude, direction, or speed of objects. It can be used to detect aircraft, ships, spacecraft, guided missiles, motor vehicles, weather formations, and terrain. The radar dish or antenna transmits pulses of radio...
was a German
Germany
Germany , officially the Federal Republic of Germany , is a federal parliamentary republic in Europe. The country consists of 16 states while the capital and largest city is Berlin. Germany covers an area of 357,021 km2 and has a largely temperate seasonal climate...
airborne radar in use during World War II
World War II
World War II, or the Second World War , was a global conflict lasting from 1939 to 1945, involving most of the world's nations—including all of the great powers—eventually forming two opposing military alliances: the Allies and the Axis...
. It was available in at least four major revisions, the FuG (Funk-Gerät) 202 Lichtenstein B/C, FuG 212 Lichtenstein C-1, FuG 220 Lichtenstein SN-2 and FuG 228 Lichtenstein SN-3.

Early FuG 202 Lichtenstein B/C units were not deployed until 1942. They operated at a maximum RF output power of 1.5 kW, on the 75 cm wavelength (490 MHz, or low UHF band), requiring complex Matratze (mattress) antennas, consisting of a total of thirty-two dipole elements
Dipole antenna
A dipole antenna is a radio antenna that can be made of a simple wire, with a center-fed driven element. It consists of two metal conductors of rod or wire, oriented parallel and collinear with each other , with a small space between them. The radio frequency voltage is applied to the antenna at...
, mounted in four groups of eight, each at the forward end of one of four forward-projecting masts.

During 1943 the Lichtenstein B/C was improved as the FuG 212 Lichtenstein C-1, with longer range and wider angle of view, still operating at UHF Frequencies between 420 and 480 MHz and still using the complex Matratze aerial set. By this point in the war, the British had become experts on jamming German radars. A B/C-equipped Ju 88 R-1
Junkers Ju 88
The Junkers Ju 88 was a World War II German Luftwaffe twin-engine, multi-role aircraft. Designed by Hugo Junkers' company through the services of two American aviation engineers in the mid-1930s, it suffered from a number of technical problems during the later stages of its development and early...
night fighter, Werknummer 360 043, defected in April 1943 and landed in Scotland, presenting a working example of the German radar for the first time, with the aircraft itself, still in existence as of the 21st century, becoming a museum exhibit in the UK. The subsequent refinement of 'Window'
Chaff (radar countermeasure)
Chaff, originally called Window by the British, and Düppel by the Second World War era German Luftwaffe , is a radar countermeasure in which aircraft or other targets spread a cloud of small, thin pieces of aluminium, metallized glass fibre or plastic, which either appears as a cluster of secondary...
(known as Düppel by the Luftwaffe, from the Berlin suburb it was first found near) rendered Lichtenstein B/C almost useless for several crucial weeks.

By late 1943, the Luftwaffe was starting to deploy the greatly improved FuG 220 Lichtenstein SN-2, operating on a longer-wavelength of 90 MHz (lower end of the US VHF FM broadcast band) frequency which was far less affected by electronic jamming, but this required the much larger Hirschgeweih (stag's antlers) antennas, with only eight dipole elements, looking like a much-enlarged version of what occupied the forward end of each one of the earlier quadruple Matratze masts. This aerial setup also produced tremendous drag and slowed the operating aircraft by up to 50 km/h (30 mph). The first SN-2 set had a problem with a huge minimum range of 500 meters, initially requiring the retention of a supplementary B/C or C-1 set with its full set of four Matratze masts, but the alarming drag that full sets of both types of antennas caused, from both radars being installed, later changed the requirement to only a "one-quarter" subset of the earlier Matratze array at the end of a single mast, centrally mounted on the nose of the aircraft when the BC or C-1 UHF radar remained installed. Improvements in spring 1944 led to newer SN-2 versions with lower minimum range, which allowed the older UHF radar system to be removed entirely. In July 1944, the newest version of the SN-2 radar fell into Allied hands when a fully equipped Ju 88 G-1, of 7 Staffel/NJG 2
Nachtjagdgeschwader 2
Nachtjagdgeschwader 2 was a German Luftwaffe night fighter-wing of World War II. NJG 2 was formed on 1 September 1940 in Gilze en Rijen from II./Nachtjagdgeschwader 1 . Stab I./NJG 2 was formed from Stab II./NJG 1,while 1./NJG 2 was formed from 4./NJG1 equipped with the Junkers Ju 88C-1...
, flew the wrong way on a landing beacon and landed in England
RAF Woodbridge
Royal Air Force Station Woodbridge, more commonly referred to as RAF Woodbridge, is a former Royal Air Force military airbase situated to the east of Woodbridge in the county of Suffolk, England...
by accident, with the crew not realising the mistake until it was too late to destroy the radar or IFF
Identification friend or foe
In telecommunications, identification, friend or foe is an identification system designed for command and control. It is a system that enables military and national interrogation systems to identify aircraft, vehicles, or forces as friendly and to determine their bearing and range from the...
gear. This led to successful jamming of several frequency bands of the FuG 220 (I to III, 72, 81 and 90 MHz) but several other bands were still operational. After the Allied jammings the FuG 220 antenna setup was optimized for the still operational bands, the 90-degree vertical dipole setup was changed to a 45-degree diagonal setup.

Late in 1944, the Morgenstern (Morningstar) antenna, consisting of three sets (as with a Yagi antenna
Yagi antenna
A Yagi-Uda array, commonly known simply as a Yagi antenna, is a directional antenna consisting of a driven element and additional parasitic elements...
) of two 90° crossed dipole elements per set, with each set of elements of progressively longer length from fore to aft, on a central, forward projecting mast, was developed. This was small enough to fit into the nose of a Ju 88, and was covered with a wooden cone with the extreme tip of each element barely protruding above the surface. Further development led to the FuG 228 Lichtenstein SN-3 radar set but this saw little to no service.

A 9 cm wavelength system known as FuG 240 Berlin was developed, based on captured examples of the Allies' cavity magnetron
Cavity magnetron
The cavity magnetron is a high-powered vacuum tube that generates microwaves using the interaction of a stream of electrons with a magnetic field. The 'resonant' cavity magnetron variant of the earlier magnetron tube was invented by John Randall and Harry Boot in 1940 at the University of...
technology but saw little to no operational use.

The Allies were able to jam and track the early FuG 202 and 212 sets by Summer 1943. During several months in this period they rendered these sets almost useless by blinding them with 'Window'
Chaff (radar countermeasure)
Chaff, originally called Window by the British, and Düppel by the Second World War era German Luftwaffe , is a radar countermeasure in which aircraft or other targets spread a cloud of small, thin pieces of aluminium, metallized glass fibre or plastic, which either appears as a cluster of secondary...
, known as Düppel to the Germans of WW II, and today known as Chaff. Fully jamming the SN-2 took longer but was probably accomplished by the Allies in late 1944 or early 1945. Much more dangerous were Mosquito intruders equipped with a device called Serrate
Serrate radar detector
Serrate was an Allied radar detection and homing device, used in Allied nightfighters to track German night fighters equipped with the earlier UHF-band BC and C-1 versions of the Lichtenstein radar during World War II....
to allow them to track German night fighters by emissions from their Lichtenstein B/C, C-1 or SN-2 sets.

An aerial manouvre known as the 'corkscrew' was developed to remove an attacked heavy bomber from within the 60-degree
Degree (angle)
A degree , usually denoted by ° , is a measurement of plane angle, representing 1⁄360 of a full rotation; one degree is equivalent to π/180 radians...
cone of coverage of an attacking night fighter's Lichtenstein radar. The technique was developed using the same early model UHF-band Lichtenstein-equipped, Ju 88R-1 night fighter that had landed at RAF Dyce in April 1943 by its defecting crew. It was also later flown in tests by the RAF's enemy aircraft evaluation unit, No. 1426 Flight
No. 1426 Flight RAF
No. 1426 Flight RAF, nicknamed "the Rafwaffe", was a Royal Air Force flight formed during the Second World War to evaluate captured enemy aircraft and demonstrate their characteristics to other Allied units. Several aircraft on charge with the RAE Farnborough section were also used by this unit...
, known colloquially as the 'Rafwaffe'.