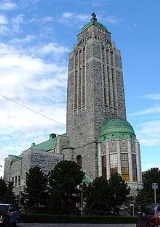 Encyclopedia
Kallio is a district
District
Districts are a type of administrative division, in some countries managed by a local government. They vary greatly in size, spanning entire regions or counties, several municipalities, or subdivisions of municipalities.-Austria:...
and a neighbourhood in Helsinki
Helsinki
Helsinki is the capital and largest city in Finland. It is in the region of Uusimaa, located in southern Finland, on the shore of the Gulf of Finland, an arm of the Baltic Sea. The population of the city of Helsinki is , making it by far the most populous municipality in Finland. Helsinki is...
, the capital of Finland
Finland
Finland , officially the Republic of Finland, is a Nordic country situated in the Fennoscandian region of Northern Europe. It is bordered by Sweden in the west, Norway in the north and Russia in the east, while Estonia lies to its south across the Gulf of Finland.Around 5.4 million people reside...
, located on the eastern side of the Helsinki peninsula about one kilometere north from the city centre. It is one of the most densely populated areas in Finland. Kallio (literally "the rock
Rock (geology)
In geology, rock or stone is a naturally occurring solid aggregate of minerals and/or mineraloids.The Earth's outer solid layer, the lithosphere, is made of rock. In general rocks are of three types, namely, igneous, sedimentary, and metamorphic...
") is separated from the city centre by the Siltasaarensalmi strait, over which is a bridge called Pitkäsilta ("long bridge"). Traditionally, the bridge marks the symbolic divide between the bourgeois
Bourgeoisie
In sociology and political science, bourgeoisie describes a range of groups across history. In the Western world, between the late 18th century and the present day, the bourgeoisie is a social class "characterized by their ownership of capital and their related culture." A member of the...
centre and the more working class
Working class
Working class is a term used in the social sciences and in ordinary conversation to describe those employed in lower tier jobs , often extending to those in unemployment or otherwise possessing below-average incomes...
areas around Kallio.

After the forming of the new centre in the 19th century, the city expanded northward. Kallio became the area inhabited by factory
Factory
A factory or manufacturing plant is an industrial building where laborers manufacture goods or supervise machines processing one product into another. Most modern factories have large warehouses or warehouse-like facilities that contain heavy equipment used for assembly line production...
workers. However, most of the working-class families have long ago been replaced as the most typical Kallio residents by young adults and elderly people living alone, in a process which could be seen as some sort of gentrification
Gentrification
Gentrification and urban gentrification refer to the changes that result when wealthier people acquire or rent property in low income and working class communities. Urban gentrification is associated with movement. Consequent to gentrification, the average income increases and average family size...
. For many people who move into Helsinki from elsewhere in Finland, Kallio is the area where they first settle. Most flats are small, and the rents were are typically somewhat lower than elsewhere in central Helsinki, partly explaining the area's popularity among students and artists. However, the rents have increased as the district has grown more popular and become an increasingly desirable area to live in.

Five SE-NW streets of Kallio are named with Finnish ordinal number
Ordinal number
In set theory, an ordinal number, or just ordinal, is the order type of a well-ordered set. They are usually identified with hereditarily transitive sets. Ordinals are an extension of the natural numbers different from integers and from cardinals...
s: Ensi linja, Toinen linja, Kolmas linja, Neljäs linja and Viides linja, meaning First Line, Second Line, Third Line, Fourth Line and Fifth Line, forming thus an example of numbered street
Numbered street
A numbered street is a street whose name is an ordinal number, as in Second Street or Tenth Avenue. Such forms are among the most common street names in North America, but also exist in other parts of the world, especially in the Middle East. Numbered streets were first used in Philadelphia and...
s, rare in Europe and unique in Helsinki.

The SW–NE streets in the same area are named after Finnish scientists from the 18th and 19th century. Starting from South-east these include:

To the east, the Torkkelinmäki area also has: