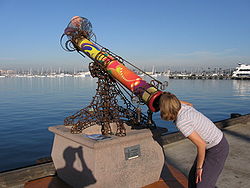 A kaleidoscope is a circle of mirror
Mirror
A mirror is an object that reflects light or sound in a way that preserves much of its original quality prior to its contact with the mirror. Some mirrors also filter out some wavelengths, while preserving other wavelengths in the reflection...
s containing loose, colored objects such as bead
Bead
A bead is a small, decorative object that is usually pierced for threading or stringing. Beads range in size from under to over in diameter. A pair of beads made from Nassarius sea snail shells, approximately 100,000 years old, are thought to be the earliest known examples of jewellery. Beadwork...
s or pebble
Pebble
A pebble is a clast of rock with a particle size of 4 to 64 millimetres based on the Krumbein phi scale of sedimentology. Pebbles are generally considered to be larger than granules and smaller than cobbles . A rock made predominantly of pebbles is termed a conglomerate...
s and bits of glass. As the viewer looks into one end, light
Light
Light or visible light is electromagnetic radiation that is visible to the human eye, and is responsible for the sense of sight. Visible light has wavelength in a range from about 380 nanometres to about 740 nm, with a frequency range of about 405 THz to 790 THz...
entering the other end creates a colorful pattern, due to the reflection
Reflection (physics)
Reflection is the change in direction of a wavefront at an interface between two differentmedia so that the wavefront returns into the medium from which it originated. Common examples include the reflection of light, sound and water waves...
off the mirrors. Coined in 1817 by Scottish inventor Sir David Brewster
David Brewster
Sir David Brewster KH PRSE FRS FSA FSSA MICE was a Scottish physicist, mathematician, astronomer, inventor, writer and university principal.-Early life:...
, the word "kaleidoscope" is derived from the Ancient Greek καλ(ός) (beauty, beautiful), είδο(ς) (form, shape) and -σκόπιο (tool for examination)—hence "observer of beautiful forms."

Kaleidoscopes operate on the principle of multiple reflection, where several mirrors are attached together. Typically there are three rectangular lengthwise mirrors. Setting the mirrors at a 45-degree
Degree (angle)
A degree , usually denoted by ° , is a measurement of plane angle, representing 1⁄360 of a full rotation; one degree is equivalent to π/180 radians...
angle creates eight duplicate images of the objects, six at 60°, and two at 90°. As the tube is rotated, the tumbling of the coloured objects presents the viewer with varying colours and patterns. Any arbitrary pattern of objects shows up as a beautiful symmetrical pattern created by the reflections in the mirrors. A two-mirror model yields a pattern or patterns isolated against a solid black background, while a three-mirror (closed triangle) model yields a pattern that fills the entire field.

Modern kaleidoscopes are made with brass
Brass
Brass is an alloy of copper and zinc; the proportions of zinc and copper can be varied to create a range of brasses with varying properties.In comparison, bronze is principally an alloy of copper and tin...
tubes, stained glass
Stained glass
The term stained glass can refer to coloured glass as a material or to works produced from it. Throughout its thousand-year history, the term has been applied almost exclusively to the windows of churches and other significant buildings...
, wood, steel
Steel
Steel is an alloy that consists mostly of iron and has a carbon content between 0.2% and 2.1% by weight, depending on the grade. Carbon is the most common alloying material for iron, but various other alloying elements are used, such as manganese, chromium, vanadium, and tungsten...
, gourd
Gourd
A gourd is a plant of the family Cucurbitaceae. Gourd is occasionally used to describe crops like cucumbers, squash, luffas, and melons. The term 'gourd' however, can more specifically, refer to the plants of the two Cucurbitaceae genera Lagenaria and Cucurbita or also to their hollow dried out shell...
s and almost any other material an artist can sculpt or manipulate. The part of the kaleidoscope containing objects to be viewed is the 'object chamber' or 'object cell'. Object cells may contain almost any material. Sometimes the object cell is filled with liquid so the items float and move through the object cell with slight movement from the person viewing.

Sir David Brewster
David Brewster
Sir David Brewster KH PRSE FRS FSA FSSA MICE was a Scottish physicist, mathematician, astronomer, inventor, writer and university principal.-Early life:...
began work leading towards invention of the kaleidoscope in 1815 when he was conducting experiments on light polarization but it was not patent
Patent
A patent is a form of intellectual property. It consists of a set of exclusive rights granted by a sovereign state to an inventor or their assignee for a limited period of time in exchange for the public disclosure of an invention....
ed until two years later. His initial design was a tube with pairs of mirrors at one end, pairs of translucent disks at the other, and beads between the two. Brewster chose renowned achromatic lens
Achromatic lens
An achromatic lens or achromat is a lens that is designed to limit the effects of chromatic and spherical aberration. Achromatic lenses are corrected to bring two wavelengths into focus in the same plane....
developer Philip Carpenter
Carpenter and Westley
Carpenter and Westley were a British optical, mathematical and scientific instrument makers between 1808 and 1914. The company was founded by Philip Carpenter and, after his death, was continued by his sister Mary Carpenter alongside former apprentice William Westley...
as the sole manufacturer of the kaleidoscope in 1817. It proved to be a massive success with two hundred thousand kaleidoscopes sold in London
London
London is the capital city of :England and the :United Kingdom, the largest metropolitan area in the United Kingdom, and the largest urban zone in the European Union by most measures. Located on the River Thames, London has been a major settlement for two millennia, its history going back to its...
and Paris
Paris
Paris is the capital and largest city in France, situated on the river Seine, in northern France, at the heart of the Île-de-France region...
in just three months. Realising that the company could not meet this level of demand Brewster requested permission from Carpenter on 17 May 1818 for the device to be made by other manufacturers, to which he agreed. Initially intended as a science tool, the kaleidoscope was later copied as a toy
Toy
A toy is any object that can be used for play. Toys are associated commonly with children and pets. Playing with toys is often thought to be an enjoyable means of training the young for life in human society. Different materials are used to make toys enjoyable and cuddly to both young and old...
. Brewster later believed he would make money from this popular invention; however, a fault in his patent application allowed others to copy his invention.

Cozy Baker (d. October 19, 2010)—founder of The Brewster Kaleidoscope Society—collected kaleidoscopes and wrote books about a few of the artists making them in the 1970s through 2000. Baker is credited with energizing a renaissance in kaleidoscope-making in America. In 1999 a short-lived magazine dedicated to kaleidoscopes—Kaleidoscope Review—was published, covering artists, collectors, dealers, events, and including how-to articles. This magazine was created and edited by Brett Bensley, at that time a well-known kaleidoscope artist and resource on kaleidoscope information.

Craft galleries often carry a few kaleidoscopes, while other enterprises specialize in them, carrying dozens of different types from different artists and craftspeople.