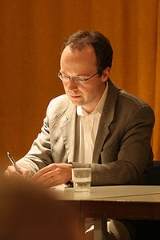 Encyclopedia
Jussi Kristian Halla-aho (born 27 April 1971 in Tampere
Tampere
Tampere is a city in southern Finland. It is the most populous inland city in any of the Nordic countries. The city has a population of , growing to approximately 300,000 people in the conurbation and over 340,000 in the metropolitan area. Tampere is the third most-populous municipality in...
) is a Finnish Slavic linguist, blog
Blog
A blog is a type of website or part of a website supposed to be updated with new content from time to time. Blogs are usually maintained by an individual with regular entries of commentary, descriptions of events, or other material such as graphics or video. Entries are commonly displayed in...
ger and a politician
Politician
A politician, political leader, or political figure is an individual who is involved in influencing public policy and decision making...
for the True Finns
True Finns
True Finns or The Finns is a populist and nationalist political party in Finland, founded in 1995 following the dissolution of the Finnish Rural Party. The head of the movement is Timo Soini. In the 2011 Finnish parliamentary election, The party won 19.1% of votes, becoming the third largest party...
party who has become well known for his essays criticising the humanitarian immigration
Immigration
Immigration is the act of foreigners passing or coming into a country for the purpose of permanent residence...
and multiculturalism
Multiculturalism
Multiculturalism is the appreciation, acceptance or promotion of multiple cultures, applied to the demographic make-up of a specific place, usually at the organizational level, e.g...
policies adopted in Finland
Finland
Finland , officially the Republic of Finland, is a Nordic country situated in the Fennoscandian region of Northern Europe. It is bordered by Sweden in the west, Norway in the north and Russia in the east, while Estonia lies to its south across the Gulf of Finland.Around 5.4 million people reside...
.
According to the newspaper Aamulehti
Aamulehti
Aamulehti is a Finnish newspaper published in Tampere. It has the second largest circulation of Finnish dailies with an average circulation of 136,726 per day and 140,802 on Sundays . Today Aamulehti is part of Alma Media, a large media corporation in Finland...
, he is the best-known political blogger in Finland.

Halla-aho was elected to the Helsinki City Council in 2008. He became
Finnish parliamentary election, 2011
An election to the Eduskunta was held on 17 April 2011 after the termination of the previous parliamentary term. Advance voting, which included voting by Finnish expatriates, was held between 6 and 12 April with a turnout of 31.2%....
an MP in the Finnish parliament in 2011. In the parliament he was made chairman of the Administration Committee, which deals with bills concerning immigration.

Halla-aho was elected a member of Helsinki City Council in the 2008 municipal elections as a candidate of the True Finns
True Finns
True Finns or The Finns is a populist and nationalist political party in Finland, founded in 1995 following the dissolution of the Finnish Rural Party. The head of the movement is Timo Soini. In the 2011 Finnish parliamentary election, The party won 19.1% of votes, becoming the third largest party...
party, although he was not a member of the party until 2010. In the 2008 elections, he was the 18th most popular candidate in the entire country and the second most popular candidate of the True Finns party after the party leader Timo Soini
Timo Soini
Timo Juhani Soini is a Finnish politician, and co-founder and current leader of the True Finns party. He was a member of the European Parliament from 2009 until 2011, when he returned to the Parliament of Finland. Well-known as an EU-sceptic populist, he was elected a member of the Espoo city...
. Halla-aho won the largest number of personal votes for the party in
Helsinki.

Halla-aho has stated that he became politically active because finds the Finnish immigration policy a problem and that Europe is heading towards a catastrophe because of massive immigration. Halla-aho supports the welfare state
Welfare state
A welfare state is a "concept of government in which the state plays a key role in the protection and promotion of the economic and social well-being of its citizens. It is based on the principles of equality of opportunity, equitable distribution of wealth, and public responsibility for those...
and in respect to the economic policy he places himself on the left side of the political spectrum, even though he has told that if he had to choose between left-wing
Left-wing politics
In politics, Left, left-wing and leftist generally refer to support for social change to create a more egalitarian society...
and right-wing
Right-wing politics
In politics, Right, right-wing and rightist generally refer to support for a hierarchical society justified on the basis of an appeal to natural law or tradition. To varying degrees, the Right rejects the egalitarian objectives of left-wing politics, claiming that the imposition of equality is...
in totality he would choose the right-wing.

Halla-aho was elected into parliament in 2011
Finnish parliamentary election, 2011
An election to the Eduskunta was held on 17 April 2011 after the termination of the previous parliamentary term. Advance voting, which included voting by Finnish expatriates, was held between 6 and 12 April with a turnout of 31.2%....
. His vote share was the sixth highest in the country and the second highest within his party.

Halla-aho maintains a blog titled Scripta that deals with issues such as ”immigration, multiculturalism, tolerance
Toleration
Toleration is "the practice of deliberately allowing or permitting a thing of which one disapproves. One can meaningfully speak of tolerating, ie of allowing or permitting, only if one is in a position to disallow”. It has also been defined as "to bear or endure" or "to nourish, sustain or preserve"...
, racism
Racism
Racism is the belief that inherent different traits in human racial groups justify discrimination. In the modern English language, the term "racism" is used predominantly as a pejorative epithet. It is applied especially to the practice or advocacy of racial discrimination of a pernicious nature...
, freedom of speech
Freedom of speech
Freedom of speech is the freedom to speak freely without censorship. The term freedom of expression is sometimes used synonymously, but includes any act of seeking, receiving and imparting information or ideas, regardless of the medium used...
and political correctness
Political correctness
Political correctness is a term which denotes language, ideas, policies, and behavior seen as seeking to minimize social and institutional offense in occupational, gender, racial, cultural, sexual orientation, certain other religions, beliefs or ideologies, disability, and age-related contexts,...
”. His blog has between 3,000 and 6,000 readers a day.

According to Halla-aho the biggest problem in the immigration due to humanitarian causes is the large amount of immigrants in relation to the resources used to integrate
Social integration
Social integration, in sociology and other social sciences, is the movement of minority groups such as ethnic minorities, refugees and underprivileged sections of a society into the mainstream of societies...
newcomers. He has stated that a minority group whose integration has failed everywhere is the Muslim
Muslim
A Muslim, also spelled Moslem, is an adherent of Islam, a monotheistic, Abrahamic religion based on the Quran, which Muslims consider the verbatim word of God as revealed to prophet Muhammad. "Muslim" is the Arabic term for "submitter" .Muslims believe that God is one and incomparable...
s that come from certain parts of the world. According to Halla-aho the cultures that fail to integrate are often cultures that respect force, unlike the Western civilisation. As long as the immigrants stick to the cultural characteristics of their countries of origin, their isolation within the society in the destination country is maintained. Therefore their adaptation is not possible which creates problems such as social exclusion
Social exclusion
Social exclusion is a concept used in many parts of the world to characterise contemporary forms of social disadvantage. Dr. Lynn Todman, director of the Institute on Social Exclusion at the Adler School of Professional Psychology, suggests that social exclusion refers to processes in which...
and ethnic ghettoisation. He has stated that positive discrimination and privileges due to culture or nationality should not be allowed. According to Halla-aho, criticising "totalitarian
Totalitarianism
Totalitarianism is a political system where the state recognizes no limits to its authority and strives to regulate every aspect of public and private life wherever feasible...
fascist
Fascism
Fascism is a radical authoritarian nationalist political ideology. Fascists seek to rejuvenate their nation based on commitment to the national community as an organic entity, in which individuals are bound together in national identity by suprapersonal connections of ancestry, culture, and blood...
ideologies like political Islam
Political aspects of Islam
Political aspects of Islam are derived from the Qur'an, the Sunna , Muslim history, and elements of political movements outside Islam....
" should not be considered racism and that facts cannot be criminalised.

According to Halla-aho, immigration is a taboo
Taboo
A taboo is a strong social prohibition relating to any area of human activity or social custom that is sacred and or forbidden based on moral judgment, religious beliefs and or scientific consensus. Breaking the taboo is usually considered objectionable or abhorrent by society...
in Finland. He has disclosed that he has received death threat
Death threat
A death threat is a threat of death, often made anonymously, by one person or a group of people to kill another person or groups of people. These threats are usually designed to intimidate victims in order to manipulate their behavior, thus a death threat is a form of coercion...
s because of his web columns.

After delaying their decision for several times The Finnish Green Women's Association announced 18 November 2008 that they have requested the Finnish police to begin criminal investigation on Halla-aho. The Green Women's Association's leader Heli Järvinen
Heli Järvinen
Heli Järvinen is a Finnish politician for the Green League, representing the South Savo constituency. She was elected to the Finnish Parliament in the parliamentary election of March 2007. She is also a member of the municipal council of Kerimäki...
claims that
Halla-aho's texts are not simply expressions of freedom of speech and bona fide criticism of multiculturalism but they incite to raping
Rape
Rape is a type of sexual assault usually involving sexual intercourse, which is initiated by one or more persons against another person without that person's consent. The act may be carried out by physical force, coercion, abuse of authority or with a person who is incapable of valid consent. The...
and hatred. Halla-aho has denied this and told that he opposes violence against women. In December 2008, Finnish police began the investigation on Halla-aho for incitement against an ethnic group because of his texts (see section below).
x