The precedent
Precedent
In common law legal systems, a precedent or authority is a principle or rule established in a legal case that a court or other judicial body may apply when deciding subsequent cases with similar issues or facts...
s are usually created in cases for which the applicable Acts of Parliament and Decree
Decree
A decree is a rule of law issued by a head of state , according to certain procedures . It has the force of law...
s do not provide a clear solution for a question of law or in which there is room for interpretation. Approximately 150 such precedents are decided each year.

Under the Finnish legal system a judicial precedent is not binding. Courts of appeal and even district courts may depart from earlier decisions made by the Supreme Court, for example when the social circumstances have considerably changed. In practice, however, precedents of the Supreme Court are followed in cases arising after the precedent has been created and involving a similar point of law. The Supreme Court may also itself depart from its earlier precedents, provided that the case is considered by an enlarged chamber (11 members) or by a full court.

Precedents in the Supreme Court cases are published every six months. In addition they are available in a specific database (FINLEX) at http://www.finlex.fi/. The panel of the Court deciding the precedents also makes the decisions concerning their publication.

The title of a judgment briefly sets forth the point of law to which the precedent applied and which constitutes the reason for its publication. In cases containing to precedents, the Supreme Court will also have to take a position on questions other than those outlined in the title. However, such positions are like any other judgements of the Court which do not create precedents. A precedent contributes to the development of national law by providing consistency in case law. The objective is that courts throughout the country interpret the law in a uniform manner and apply legal principles by means of consistent assessment and deliberation. Precedents are also used in research, for the purpose of analysing the contents of existing law. 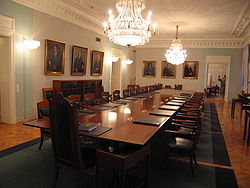 In cases before the Supreme Court where leave to appeal must first be granted before an appeal is allowed from a decision of a lower court, the proceedings before the Court have two stages: decision on admissibility and decision on the merits of the case. The admissibility of the case, i.e. the granting of leave to appeal, shall be decided on by two members of the court upon presentation by a referendary. This means that the two members make the decision on the basis of the preliminary work and opinion of the referendary. Under certain circumstances the decision on admissibility may be made by three members of the Court instead of two. In case an application for leave to appeal is rejected, the case will be closed and the judgment of the court of appeal will remain final.

Should leave to appeal be granted, the merits of the case, i.e. the allegations presented in the appeal petition, will be decided on by five members of the Court. Also the decision on the merits is made upon presentation by a referendary, meaning that the referendary prepares the case and is partly responsible for the outcome of the case. Apart from documentary evidence and applicable legislation, the sources of law on which the decision of the Supreme Court may be based include case law, the legislative history of Acts of Parliament, textbooks and international conventions.

When the requirement of leave to appeal was introduced at the beginning of 1980, the position of the Supreme Court as the court changed considerably. The earlier system of appeal with a hierarchy of three court instances was replaced by a system with two instances: a decision of a court of first instance may usually be appealed against to one superior court. Thereby the courts of appeal are the highest instance for most court proceedings, whereas the role of the Supreme Court clearly is that of creating precedents. Leave to appeal is also required for appeal against decisions of specialised courts.

Grounds for leave to appeal

The preconditions to the granting of leave to appeal are as provided in Chapter 30, section 3 (1) of the Code of Judicial Procedure, under which the Supreme Court may only grant leave to appeal on the following grounds:


The purpose of the requirement of leave to appeal is to enable the Supreme Court to concentrate on guiding judicial practice through precedent. Therefore the first alternative ground for the granting of leave to appeal is the most important one. A precedent may relate to the application of law in identical or similar cases or to the consistency of case law. In the first- mentioned case the precedent provides guidance for resolving similar questions of law in the future. In the latter case the precedent provides guidance for such practice of lower courts as is inconsistent or contradicts the case law of the Supreme Court. The granting of leave to appeal on the grounds that the case creates a precedent always suggests that the decision of the Supreme Court has general legal relevance.

The other grounds for the granting of leave to appeal are seldom applied. They are mainly applied when there is need to rectify a clearly erroneous, unreasonable or unfair court decision.

The justices of the Supreme Court have usually earlier experience from different branches of the legal profession, most often in courts of law, but also in the drafting of legislation, academic positions and as legal practitioners.

According to law, the Supreme Court shall have a President and at least 15 members. At present the Court consists of 18 members. The average age of the current justices, while having been appointed, is 48. As well as in elsewhere in Finnish worklife, the justices are required to retire at the age of 68. Otherwise, they enjoy the constitutional right to remain in office, unless they are impeached by the High Court of Impeachment or found medically incapable by the Supreme Court. The referendaries enjoy a similar constitutional right to remain in office, but their work-related offences are handled by the Court of Appeals of Helsinki, instead of the High Court of Impeachment.