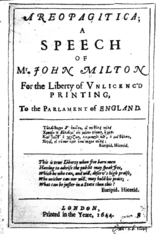 Overview
Freedom of speech is the freedom to speak freely without censorship
Censorship
thumb|[[Book burning]] following the [[1973 Chilean coup d'état|1973 coup]] that installed the [[Military government of Chile |Pinochet regime]] in Chile...
. The term freedom of expression is sometimes used synonymously, but includes any act of seeking, receiving and imparting information or ideas, regardless of the medium used. In practice, the right to freedom of speech is not absolute in any country and the right is commonly subject to limitations, such as on libel, slander, obscenity
Obscenity
An obscenity is any statement or act which strongly offends the prevalent morality of the time, is a profanity, or is otherwise taboo, indecent, abhorrent, or disgusting, or is especially inauspicious...
, incitement
Incitement
In English criminal law, incitement was an anticipatory common law offence and was the act of persuading, encouraging, instigating, pressuring, or threatening so as to cause another to commit a crime....
to commit a crime, etc.