Encyclopedia
Jungle Island is an interactive zoological park in Watson Island, Miami, Florida
Florida
Florida is a state in the southeastern United States, located on the nation's Atlantic and Gulf coasts. It is bordered to the west by the Gulf of Mexico, to the north by Alabama and Georgia and to the east by the Atlantic Ocean. With a population of 18,801,310 as measured by the 2010 census, it...
, United States
United States
The United States of America is a federal constitutional republic comprising fifty states and a federal district...
. It was originally Parrot Jungle and moved from its original suburban Pinecrest
Pinecrest, Florida
Pinecrest is a suburban village in Miami-Dade County, Florida, United States of America. The population was 19,055 as of the census of 2000. Pinecrest is governed by a five-member Village Council and operates under the Council-Manager form of government....
to its present location just east of Downtown Miami
Downtown Miami
Downtown Miami is an urban residential neighborhood, and the central business district of Miami, Miami-Dade County, and South Florida in the United States...
renamed as Parrot Jungle Island. In 2007, the park was again renamed to Jungle Island. 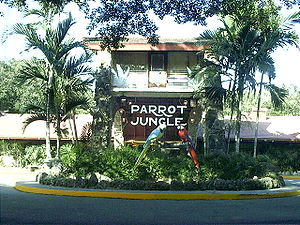 Parrot Jungle was a zoological park south of Miami on 22 acres (89,030.9 m²) of property at Killian Drive and South Red Road
Red Road (Miami)
Red Road, also known as West 57th Avenue, is a north-south street that runs west of downtown Miami in Miami-Dade County, Florida and into Broward County. Red Road is signed as State Road 959 from U.S. 1 to the Dolphin Expressway, and State Road 823 from U.S...
.

Originally founded in 1936 by Franz & Louise Scherr, Parrot Jungle was one of the first tourist attraction
Tourist attraction
A tourist attraction is a place of interest where tourists visit, typically for its inherent or exhibited cultural value, historical significance, natural or built beauty, or amusement opportunities....
s established in the Miami area. The idea for Parrot Jungle began after Scherr, who owned and operated a feed and supply store in Homestead
Homestead, Florida
Homestead is a city in Miami-Dade County, Florida, United States nestled between Biscayne National Park to the east and Everglades National Park to the west. Homestead is primarily a Miami suburb and a major agricultural area....
, became intrigued with the idea of building an attraction where birds would "fly free". Scherr leased 22 acres (89,030.9 m²) of hammock
Hammock (ecology)
Hammocks are dense stands of hardwood trees that grow on natural rises of only a few inches higher than surrounding marshland that is otherwise too wet to support them. Hammocks are distinctive in that they are formed gradually over thousands of years rising in a wet area through the deposits of...
land for an annual fee of $25. Parrot Jungle was built as a winding nature trail dug through the coral rock
Coral
Corals are marine animals in class Anthozoa of phylum Cnidaria typically living in compact colonies of many identical individual "polyps". The group includes the important reef builders that inhabit tropical oceans and secrete calcium carbonate to form a hard skeleton.A coral "head" is a colony of...
and hammock land, indigenous to the area. All the natural plants were left undisturbed. The entrance was built on Red Road.

The attraction opened on December 20, 1936, to about 100 visitors. Each paid 25 cents admission to see and hear Scherr talk about his birds, trees and flowers. Since 1936, over a million visitors have visited Parrot Jungle. Among its many famous visitors was Sir Winston Churchill
Winston Churchill
Sir Winston Leonard Spencer-Churchill, was a predominantly Conservative British politician and statesman known for his leadership of the United Kingdom during the Second World War. He is widely regarded as one of the greatest wartime leaders of the century and served as Prime Minister twice...
, film director Steven Spielberg
Steven Spielberg
Steven Allan Spielberg KBE is an American film director, screenwriter, producer, video game designer, and studio entrepreneur. In a career of more than four decades, Spielberg's films have covered many themes and genres. Spielberg's early science-fiction and adventure films were seen as an...
, and former US President Jimmy Carter
Jimmy Carter
James Earl "Jimmy" Carter, Jr. is an American politician who served as the 39th President of the United States and was the recipient of the 2002 Nobel Peace Prize, the only U.S. President to have received the Prize after leaving office...
. On December 17, 2002, the Village of Pinecrest purchased the Parrot Jungle with the aim of developing the site as Pinecrest Gardens
Pinecrest Gardens
Pinecrest Gardens is a park in Pinecrest, Florida on the corner of Southwest 111th Street and Southwest 57th Avenue ....
. On March 8, 2003 the Pinecrest Village Council dedicated Pinecrest Gardens and officially opened it to the public as the Village's newest municipal park, without the animals that had made the park famous. The actual attraction moved to a new waterfront location on Watson Island
Watson Island, Florida
Watson Island is a neighborhood and man-made island in Biscayne Bay, in Miami, Florida, United States. Immediately east of the Omni neighborhood of Downtown Miami, it is connected to the mainland and South Beach, Miami by the MacArthur Causeway.-History:...
between Downtown Miami and South Beach. It opened on June 28, 2003 as Parrot Jungle Island.

On June 28, 2007, four years after the park first opened at its bayfront location, Jungle Island became the official name.

The theme park's landmark are its sails covering the Jungle Theater, an arena where visitors encounter wildlife from all over the world. On the other side of the theater lives Hercules, the 900-pound liger
Liger
The liger is a hybrid cross between a male lion and a tigress . Thus, it has parents with the same genus but of different species. It is distinct from the similar hybrid tiglon. It is the largest of all known cats and extant felines.Ligers enjoy swimming, which is a characteristic of tigers, and...
, a cross between a lion
Lion
The lion is one of the four big cats in the genus Panthera, and a member of the family Felidae. With some males exceeding 250 kg in weight, it is the second-largest living cat after the tiger...
and a tiger
Tiger
The tiger is the largest cat species, reaching a total body length of up to and weighing up to . Their most recognizable feature is a pattern of dark vertical stripes on reddish-orange fur with lighter underparts...
. The park is also home to a trained bird show at the Parrot Bowl, and an exhibition of reptile
Reptile
Reptiles are members of a class of air-breathing, ectothermic vertebrates which are characterized by laying shelled eggs , and having skin covered in scales and/or scutes. They are tetrapods, either having four limbs or being descended from four-limbed ancestors...
s, penguin
Penguin
Penguins are a group of aquatic, flightless birds living almost exclusively in the southern hemisphere, especially in Antarctica. Highly adapted for life in the water, penguins have countershaded dark and white plumage, and their wings have become flippers...
s, flamingos and other animals at the Serpentarium.

In the Parrot Bowl, Jungle Island's "Winged Wonders" show highlights birds from around the world, including the Andean Condor
Andean Condor
The Andean Condor is a species of South American bird in the New World vulture family Cathartidae and is the only member of the genus Vultur...
, Cassowary
Cassowary
The cassowaries are ratites, very large flightless birds in the genus Casuarius native to the tropical forests of New Guinea, nearby islands and northeastern Australia. There are three extant species recognized today...
, and King Vulture
King Vulture
The King Vulture is a large bird found in Central and South America. It is a member of the New World vulture family Cathartidae. This vulture lives predominantly in tropical lowland forests stretching from southern Mexico to northern Argentina, though some believe that William Bartram's Painted...
.

The Jungle Theater has the "Tale of the Tiger" show, featuring large cats and wildlife.

In the "Serpentarium" (named in honor of Bill Haast
Bill Haast
William E. "Bill" Haast was the director of the Miami Serpentarium Laboratories, a facility near Punta Gorda, Florida, which produces snake venom for medical and research use. Haast extracted venom from venomous snakes from the time he was a boy...
's famed Miami Serpentarium), a wide spectrum of animals are presented – from African Penguin
African Penguin
The African Penguin , also known as the Black-footed Penguin is a species of penguin, confined to southern African waters. It is known as Brilpikkewyn in Afrikaans, Inguza or Unombombiya in Xhosa, Manchot Du Cap in French and Pingüino Del Cabo in Spanish...
s to Alligator Snapping Turtle
Alligator Snapping Turtle
The alligator snapping turtle is one of the largest freshwater turtles in the world. It is not closely related to, but is often associated with the common snapping turtle. They are the sole living member of the genus Macrochelys--while common snappers are in the genus Chelydra...
s, Boa Constrictor
Boa constrictor
The Boa constrictor is a large, heavy-bodied species of snake. It is a member of the family Boidae found in North, Central, and South America, as well as some islands in the Caribbean. A staple of private collections and public displays, its color pattern is highly variable yet distinctive...
snakes to lemurs. Various other animal feedings, keeper talks and casual presentations are conducted throughout each day on Jungle Island.

The park's "Everglades Habitat" recreates the ecosystem of the Florida Everglades, featuring much of the natural flora and fauna found in the natural environment.

The entire facility was planted without the use of any artificial fertilizers or pesticides, making it one of the only entirely sustainable theme parks or zoos in the United States.

In recent years Jungle Island has taken center stage on the greater Miami and the beaches environmental movement. In addition to avoiding the use artificial fertilizers and pesticides, Jungle Island purchases carbon credits to offset special events. Jungle Island also plays host to a number of large environmental conferences and events - including the annual Gateway To Green, Energy Smart Florida , and Earth Miami.