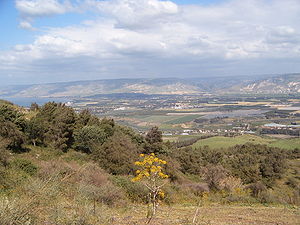 The Jordan Valley forms part of the larger Jordan Rift Valley
Jordan Rift Valley
The Jordan Rift Valley is an elongated depression located in modern-day Israel, Jordan and the Palestinian territories. This geographic region includes the Jordan River, Jordan Valley, Hula Valley, Lake Tiberias and the Dead Sea, the lowest land elevation on Earth...
. It is 120 kilometers long and 15 kilometers wide, where it runs from Lake Tiberias in the north to northern Dead Sea
Dead Sea
The Dead Sea , also called the Salt Sea, is a salt lake bordering Jordan to the east and Israel and the West Bank to the west. Its surface and shores are below sea level, the lowest elevation on the Earth's surface. The Dead Sea is deep, the deepest hypersaline lake in the world...
in the south. It runs for an additional 155 kilometer south of the Dead Sea to Aqaba
Aqaba
Aqaba is a coastal city in the far south of Jordan, the capital of Aqaba Governorate at the head of the Gulf of Aqaba. Aqaba is strategically important to Jordan as it is the country's only seaport. Aqaba is best known today as a diving and beach resort, but industrial activity remains important...
, an area also known as Wadi Arabah or the Arava valley
Arabah
The Arabah , also known as Aravah, is a section of the Great Rift Valley running in a north-south orientation between the southern end of the Sea of Galilee down to the Dead Sea and continuing further south where it ends at the Gulf of Aqaba. It includes most of the border between Israel to the...
. It forms the border between Israel
Israel
The State of Israel is a parliamentary republic located in the Middle East, along the eastern shore of the Mediterranean Sea...
and Jordan
Jordan
Jordan , officially the Hashemite Kingdom of Jordan , Al-Mamlaka al-Urduniyya al-Hashemiyya) is a kingdom on the East Bank of the River Jordan. The country borders Saudi Arabia to the east and south-east, Iraq to the north-east, Syria to the north and the West Bank and Israel to the west, sharing...
in the north, and the eastern strip of the West Bank
West Bank
The West Bank ) of the Jordan River is the landlocked geographical eastern part of the Palestinian territories located in Western Asia. To the west, north, and south, the West Bank shares borders with the state of Israel. To the east, across the Jordan River, lies the Hashemite Kingdom of Jordan...
in the south.

Some 47,000 Palestinians live in the part of the valley that lies in the West Bank
West Bank
The West Bank ) of the Jordan River is the landlocked geographical eastern part of the Palestinian territories located in Western Asia. To the west, north, and south, the West Bank shares borders with the state of Israel. To the east, across the Jordan River, lies the Hashemite Kingdom of Jordan...
in about twenty permanent communities, among them the city of Jericho
Jericho
Jericho ; is a city located near the Jordan River in the West Bank of the Palestinian territories. It is the capital of the Jericho Governorate and has a population of more than 20,000. Situated well below sea level on an east-west route north of the Dead Sea, Jericho is the lowest permanently...
; thousands more, largely Bedouins, live in temporary communities. About 11,000 Israelis live in 17 villages that form part of the Emek HaYarden Regional Council
Emek Hayarden Regional Council
The Emek HaYarden Regional Council , is a regional council in the Jordan River Valley between the Sea of Galilee in the north and Beit She'an in the south. It was the first regional council in Israel, formed in 1949....
in Israel. An additional 7,500 live in twenty-six Israeli settlements and five Nahal
Nahal
Nahal is an Israel Defense Forces infantry brigade. Historically, it refers to a program that combines military service and establishment of new agricultural settlements, often in outlying areas...
brigade encampments that have been established in the part of the Jordan Valley that lies in the West Bank since the 1970s. The Jordanian population of the valley is over 85,000 people, most of whom are farmers, and 80% of the farms in the Jordanian part of the valley are family farms no larger than 30 dunam
Dunam
A dunam or dönüm, dunum, donum, dynym, dulum was a non-SI unit of land area used in the Ottoman Empire and representing the amount of land that can be plowed in a day; its value varied from 900–2500 m²...
s (3 ha, 7.4 ac).

The northern part of the valley is known as the Ghor, and it includes the Jordan River. Several degrees warmer than adjacent areas, its year-round agricultural climate, fertile soils and water supply have made the Ghor a key agricultural area. The Jordan River rises from several sources, mainly the Anti-Lebanon Mountains in Syria
Syria
Syria , officially the Syrian Arab Republic , is a country in Western Asia, bordering Lebanon and the Mediterranean Sea to the West, Turkey to the north, Iraq to the east, Jordan to the south, and Israel to the southwest....
. It flows down into Lake Tiberias, 212 meters below sea level, and then drains into the Dead Sea. South of the Dead Sea, the Jordan Valley turns into the hot, dry southern part of the valley known as Wadi 'Araba, the "wilderness" or "Arabah desert" of the Bible.

Agriculture in the Ghor dates back about 10,000 years ago. By about 3000 BCE, produce from the valley was being exported to neighboring regions. The area's fertile lands were chronicled in the Old Testament
Old Testament
The Old Testament, of which Christians hold different views, is a Christian term for the religious writings of ancient Israel held sacred and inspired by Christians which overlaps with the 24-book canon of the Masoretic Text of Judaism...
, and the Jordan River is revered by Christians as the place where John the Baptist
John the Baptist
John the Baptist was an itinerant preacher and a major religious figure mentioned in the Canonical gospels. He is described in the Gospel of Luke as a relative of Jesus, who led a movement of baptism at the Jordan River...
baptized Jesus Christ.

In the last few decades, modern methods of farming have vastly expanded the agricultural output of the area. The construction of the East Ghor Canal
East Ghor Main Canal
The King Abdullah Canal is the largest irrigation canal system in Jordan and runs parallel to the east bank of the Jordan River. It was previously known as the East Ghor Main Canal and renamed in 1987 after Abdullah I of Jordan....
by Jordan in 1950s (now known as the King Abdullah Canal), which runs down the east bank of the Jordan Valley for 69 kilometers and has brought new areas under irrigation. The introduction of portable greenhouses has brought about a sevenfold increase in productivity, allowing Jordan to export large amounts of fruit and vegetables year-round.

Prior to the 1967 War
Six-Day War
The Six-Day War , also known as the June War, 1967 Arab-Israeli War, or Third Arab-Israeli War, was fought between June 5 and 10, 1967, by Israel and the neighboring states of Egypt , Jordan, and Syria...
, the valley was home to about 80,000 people largely engaged in agriculture and pastoralism. By 1971, the population had declined to 5,000 as a result of the war and the 1970-71 conflict between the Palestinian guerrillas and the Jordanian armed forces.

Since the end of the 1967 war, every Israeli government has considered this strip to be the "eastern border" of Israel
Israel
The State of Israel is a parliamentary republic located in the Middle East, along the eastern shore of the Mediterranean Sea...
with Jordan
Jordan
Jordan , officially the Hashemite Kingdom of Jordan , Al-Mamlaka al-Urduniyya al-Hashemiyya) is a kingdom on the East Bank of the River Jordan. The country borders Saudi Arabia to the east and south-east, Iraq to the north-east, Syria to the north and the West Bank and Israel to the west, sharing...
. Most of the strip lying in present-day Israel and the West Bank has been declared state land by the Israeli government. As part of the Oslo Agreements
Oslo Accords
The Oslo Accords, officially called the Declaration of Principles on Interim Self-Government Arrangements or Declaration of Principles , was an attempt to resolve the ongoing Palestinian-Israeli conflict...
, the strip was classified as Area C, with the exception of the enclave around Jericho.

Israel initially planned to construct an eastern barrier extension as part of the Israeli West Bank barrier
Israeli West Bank barrier
The Israeli West Bank barrier is a separation barrier being constructed by the State of Israel along and within the West Bank. Upon completion, the barrier’s total length will be approximately...
, thus separating the Jordan Valley from the rest of the West Bank. Plans were abandoned following international criticism of the route of the barrier as a whole by the International High Court of Justice
International Court of Justice
The International Court of Justice is the primary judicial organ of the United Nations. It is based in the Peace Palace in The Hague, Netherlands...
's decision of June 2004. Instead, a regime of forced eviction and military blockade on the movement of Palestinians and medical aid has been instituted in the Jordan Valley. B'tselem
B'Tselem
B'Tselem is an Israeli non-governmental organization . It calls itself "The Israeli Information Center for Human Rights in the Occupied Territories"...
, an Israel
Israel
The State of Israel is a parliamentary republic located in the Middle East, along the eastern shore of the Mediterranean Sea...
i human rights
Human rights
Human rights are "commonly understood as inalienable fundamental rights to which a person is inherently entitled simply because she or he is a human being." Human rights are thus conceived as universal and egalitarian . These rights may exist as natural rights or as legal rights, in both national...
group states: "These acts have served as a substitute for the construction of a physical barrier, depriving Palestinians of critical military and medical aid, opening the way for renewed Israeli settlement building." Israeli Prime Minister Benjamin Netanyahu repeatedly announced that Israel is not intending to hand over the Jordan Valley's area to the Palestinians once a permanent peace agreement is reached. The Jordan valley area's water represents 47 percent of the total water resources of the West Bank and Palestinians. Thus the area is considered as the nerve of the future Palestinian economy, trade, and agriculture.
The source of this article is wikipedia, the free encyclopedia.  The text of this article is licensed under the GFDL.