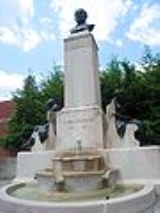 On May 19, 1795, Johns Hopkins was born on Whitehall, a 500-acre (two km²) tobacco
Tobacco
Tobacco is an agricultural product processed from the leaves of plants in the genus Nicotiana. It can be consumed, used as a pesticide and, in the form of nicotine tartrate, used in some medicines...
plantation located in Anne Arundel County, Maryland
Anne Arundel County, Maryland
Anne Arundel County is a county located in the U.S. state of Maryland. It is named for Anne Arundell , a member of the ancient family of Arundells in Cornwall, England and the wife of Cæcilius Calvert, 2nd Baron Baltimore. Its county seat is Annapolis, which is also the capital of the state...
. His first name, Johns (not John), was a family name. His great-grandmother, Margaret Johns, married Gerard Hopkins, and they named their son Johns Hopkins, a not-uncommon naming convention at the time; his name was then passed on to his grandson. His parents were Samuel Hopkins (1759–1814), of Anne Arundel County, and Hannah Janney (1774–1864), of Loudoun County, Virginia
Loudoun County, Virginia
Loudoun County is a county located in the Commonwealth of Virginia, and is part of the Washington Metropolitan Area. As of the 2010 U.S. Census, the county is estimated to be home to 312,311 people, an 84 percent increase over the 2000 figure of 169,599. That increase makes the county the fourth...
.

In 1807, the Hopkins family, who were members of the Society of Friends (Quakers)
Religious Society of Friends
The Religious Society of Friends, or Friends Church, is a Christian movement which stresses the doctrine of the priesthood of all believers. Members are known as Friends, or popularly as Quakers. It is made of independent organisations, which have split from one another due to doctrinal differences...
, emancipated their slaves, which meant that the formal education of Johns, then 12, had to be interrupted in order to help out on the plantation. Moreover, his help was needed because he was the second oldest of eleven children and, as their local Friends society had decreed, the family freed only the able-bodied slaves, and had to provide for the less able-bodied slaves, who would remain at the plantation and provide labor as they could. In 1812, at the age of 17, Hopkins left the plantation and went to Baltimore to work in the wholesale grocery business of his uncle, Gerard Hopkins. While living with his uncle's family, Johns and his cousin, Elizabeth, fell in love, but the taboo against the marriage of first cousins was especially strong among Quakers. Neither Johns nor Elizabeth ever married. Still, just as he would continue to provide for his extended family throughout his life and posthumously through his will, Hopkins bequeathed a home for Elizabeth, where she lived until her death in 1889.

Living his entire adult life in Baltimore, Hopkins made many friends among the city's social elite, many of them Quakers. One of these friends was George Peabody
George Peabody
George Peabody was an American-British entrepreneur and philanthropist who founded the Peabody Trust in Britain and the Peabody Institute in Baltimore, and was responsible for many other charitable initiatives.-Biography:...
, who was also born in 1795, and who in 1857 founded the Peabody Institute
Peabody Institute
The Peabody Institute of the Johns Hopkins University is a renowned conservatory and preparatory school located in the Mount Vernon neighborhood of Baltimore, Maryland at the corner of Charles and Monument Streets at Mount Vernon Place.-History:...
in Baltimore. Other examples of public giving were evident in the city, as public buildings housing free libraries, schools and foundations sprang up along the city's widening streets. On the advice of Peabody, some believe, Hopkins determined to use his great wealth for the public good.

Johns Hopkins' views on his bequests, and on the duties and responsibilities of the two board of trustees, especially the hospital board of trustees led by his friend and fellow Quaker Francis King, were formally stated primarily in four documents, the incorporation papers filed in 1867, his instruction letter to the hospital trustees dated March 12, 1873, his will, which was quoted from extensively in his Baltimore Sun obituary, and in his will's two codicils, one dated 1870 and the other dated 1873.

In these documents, Hopkins also made provisions for scholarships to be provided for poor youths in the states where Johns Hopkins had made his wealth, as well as assistance to orphanages other than the one for African American children, to members of his family, to those he employed, black and white, his cousin Elizabeth, and, again, to other institutions for the care and education of youths regardless of color and the care of the elderly, and the ill, including the mentally ill, and convalescents.

As per Johns Hopkins' instruction letter, the Johns Hopkins Colored Children Orphan Asylum (JHCCOA) was founded first, in 1875, a year before Gilman's inauguration, now the founding date of the university. The construction of the asylum, including its educational and living facilities, was praised by The Nation
The Nation
The Nation is the oldest continuously published weekly magazine in the United States. The periodical, devoted to politics and culture, is self-described as "the flagship of the left." Founded on July 6, 1865, It is published by The Nation Company, L.P., at 33 Irving Place, New York City.The Nation...
and the Baltimore American, the latter stating that the orphan asylum was a place where "nothing was wanting that could benefit science and humanity". As was done for other Johns Hopkins Institutions, it was planned after visits and correspondence with similar institutions in Europe and America.

The Johns Hopkins Orphan Asylum opened with 24 boys and girls. Under Gilman and his successors, this orphanage was later changed to serve as an orphanage and training school for black female orphans principally as domestic workers, and next as an "orthopedic convalescent" home and school for "colored crippled" children and orphans. The asylum was eventually closed in 1924 nearly fifty years after it opened, and was never reopened.


Hospital, University, Press, and Schools of Nursing and Medicine

As per Hopkins' March 1873 Instruction Letter, the School of Nursing
Johns Hopkins School of Nursing
The Johns Hopkins School of Nursing is part of the Johns Hopkins University located in Baltimore, Maryland, United States. Established in 1889, it is one of the nation’s oldest and pre-eminent schools for nursing education ranking first in the nation; it is also among the top recipients of...
was founded alongside the Hospital in 1889 by the hospital board of trustees in consultation with Florence Nightingale
Florence Nightingale
Florence Nightingale OM, RRC was a celebrated English nurse, writer and statistician. She came to prominence for her pioneering work in nursing during the Crimean War, where she tended to wounded soldiers. She was dubbed "The Lady with the Lamp" after her habit of making rounds at night...
. Both the nursing school and the hospital were founded over a decade after the founding of the orphan asylum in 1875 and the university in 1876. Hopkins' instruction letter explicitly stated his vision for the hospital; first, to provide assistance to the poor of "all races", no matter the indigent patient's "age, sex or color"; second, that wealthier patients would pay for services and thereby subsidize the care provided to the indigent; third, that the hospital would be the administrative unit for the orphan asylum for African American children which was to receive $25,000 in annual support out of the hospital's half of the endowment; and fourth, that the hospital and orphan asylum should serve 400 patients and 400 children respectively, fifth, that the hospital should be part of the university, and, sixth, that religion but not sectarianism should be an influence in the hospital.

Following Hopkins' death, the Baltimore Sun wrote a lengthy obituary which closed thus: "In the death of Johns Hopkins a career has been closed which affords a rare example of successful energy in individual accumulations, and of practical beneficence in devoting the gains thus acquired to the public." His contribution to the university that has become his greatest legacy was, by all accounts, the largest philanthropic bequest ever made to an American educational institution.

Johns Hopkins' Quaker faith and his early life experiences, in particular the 1807 emancipation, had a lasting influence throughout his life and his posthumous legacy as a businessman, railroad man, banker, investor, ship owner, philanthropist and a founder of several Institutions. From very early on, Johns Hopkins had looked upon his wealth as a trust to benefit future generations. He is said to have told his gardener that, "like the man in the parable, I have had many talents given to me and I feel they are in trust. I shall not bury them but give them to the lads who long for a wider education"; his philosophy quietly anticipated Andrew Carnegie
Andrew Carnegie
Andrew Carnegie was a Scottish-American industrialist, businessman, and entrepreneur who led the enormous expansion of the American steel industry in the late 19th century...
's much publicized Gospel of Wealth by more than 25 years.

His philanthropy, banking and other business practices were founded neither on slavery nor on the separate but unequal racism of the post Civil War years of his life. In this vein, integral parts of his legacy, as an emancipator, a founder of an orphan asylum for African-American youths, a staunch advocate of abolitionism and of quality care not just for those physically ill, but also for the elderly, the poor, no matter their age, gender, or skin color, and the mentally ill, have by and large been overlooked, even in the institutions that carry his name.

In 1973 Johns Hopkins was cited prominently in the Pulitzer Prize
Pulitzer Prize
The Pulitzer Prize is a U.S. award for achievements in newspaper and online journalism, literature and musical composition. It was established by American publisher Joseph Pulitzer and is administered by Columbia University in New York City...
winning book The Americans: The Democratic Experience by Daniel Boorstin, former head of the Library of Congress
Library of Congress
The Library of Congress is the research library of the United States Congress, de facto national library of the United States, and the oldest federal cultural institution in the United States. Located in three buildings in Washington, D.C., it is the largest library in the world by shelf space and...
. From November 14, 1975 to September 6, 1976 Hopkins portrait was displayed at the National Portrait Gallery
National Portrait Gallery (United States)
The National Portrait Gallery is an art gallery in Washington, D.C., administered by the Smithsonian Institution. Its collections focus on images of famous individual Americans.-Building:...
in an exhibit on the democratization of America based on Boorstin's book. In 1989, the United States Postal Service
United States Postal Service
The United States Postal Service is an independent agency of the United States government responsible for providing postal service in the United States...
issued a $1 postage stamp
Postage stamp
A postage stamp is a small piece of paper that is purchased and displayed on an item of mail as evidence of payment of postage. Typically, stamps are made from special paper, with a national designation and denomination on the face, and a gum adhesive on the reverse side...
in Johns Hopkins' honor, as part of the Great Americans series
Great Americans series
The Great Americans series is a set of definitive stamps issued by the United States Postal Service, starting on December 27, 1980 with the 19¢ stamp depicting Sequoyah, and continuing through 2002, the final stamp being the 78¢ Alice Paul self-adhesive stamp. The series, noted for its simplicity...
.