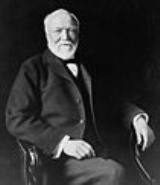 Overview
Andrew Carnegie (November 25, 1835 – August 11, 1919) was a Scottish-American industrialist, businessman, and entrepreneur who led the enormous expansion of the American steel industry in the late 19th century. He was also one of the most important philanthropists of his era.

Carnegie was born in Dunfermline
Dunfermline
Dunfermline is a town and former Royal Burgh in Fife, Scotland, on high ground from the northern shore of the Firth of Forth. According to a 2008 estimate, Dunfermline has a population of 46,430, making it the second-biggest settlement in Fife. Part of the town's name comes from the Gaelic word...
, Scotland, and migrated to the United States as a child with his parents.

The scholar and activist

His role in the American Civil War

What was his personal philosophy?

The problem of our age is the proper administration of wealth, so that the ties of brotherhood may still bind together the rich and poor in harmonious relationship. (p. 653)

Upon the sacredness of property civilization itself depends—the right of the laborer to his hundred dollars in the savings bank, and equally the legal right of the millionaire to his millions. (p. 656)

Those who would administer wisely must, indeed, be wise, for one of the serious obstacles to the improvement of our race is indiscriminate charity. (p. 662)

Thus is the problem of Rich and Poor to be solved. The laws of accumulation will be left free; the laws of distribution free. Individualism will continue, but the millionaire will be but a trustee of the poor; intrusted for a season with a great part of the increased wealth of the community, but administering it for the community far better than it could or would have done for itself. (pp. 663-664)

Surplus wealth is a sacred trust which its possessor is bound to administer in his lifetime for the good of the community. (p. 684)