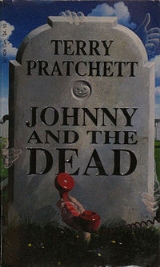 Encyclopedia
Johnny and the Dead is the second novel
Novel
A novel is a book of long narrative in literary prose. The genre has historical roots both in the fields of the medieval and early modern romance and in the tradition of the novella. The latter supplied the present generic term in the late 18th century....
by Terry Pratchett
Terry Pratchett
Sir Terence David John "Terry" Pratchett, OBE is an English novelist, known for his frequently comical work in the fantasy genre. He is best known for his popular and long-running Discworld series of comic fantasy novels...
to feature the character
Fictional character
A character is the representation of a person in a narrative work of art . Derived from the ancient Greek word kharaktêr , the earliest use in English, in this sense, dates from the Restoration, although it became widely used after its appearance in Tom Jones in 1749. From this, the sense of...
Johnny Maxwell
Johnny Maxwell
Johnny Maxwell is a fictional character in a series of three children's books by Terry Pratchett. He is a young boy living in the typical late-20th-century English town of Blackbury .Johnny has a difficult home life...
. The other novels in the Johnny Maxwell Trilogy are Only You Can Save Mankind
Only You Can Save Mankind
Only You Can Save Mankind is the first novel in the Johnny Maxwell trilogy of children's books and fifth young adult novel by Terry Pratchett, author of the Discworld sequence of books. The following novels in the Johnny Maxwell Trilogy are Johnny and the Dead and Johnny and the Bomb...
(1992) and Johnny and the Bomb
Johnny and the Bomb
Johnny and the Bomb is a 1996 novel by Terry Pratchett. It is the third novel to feature Johnny Maxwell and his friends, and deals with the rules and consequences of time travel...
(1996). In this story, Johnny sees and speaks with the spirits (they object to the term "ghost
Ghost
In traditional belief and fiction, a ghost is the soul or spirit of a deceased person or animal that can appear, in visible form or other manifestation, to the living. Descriptions of the apparition of ghosts vary widely from an invisible presence to translucent or barely visible wispy shapes, to...
") of those interred in his local cemetery
Cemetery
A cemetery is a place in which dead bodies and cremated remains are buried. The term "cemetery" implies that the land is specifically designated as a burying ground. Cemeteries in the Western world are where the final ceremonies of death are observed...
and tries to help them when their home is threatened.

Johnny and the Dead is a feature of some schools' English curriculum.

The story starts with Johnny going through the cemetery as a shortcut to reach his home. His best friend, Wobbler, thinks it's spooky. In the cemetery, Johnny meets Alderman Thomas Bowler (one of the dead). Johnny then realizes that he can see, talk to, and hear the dead. Later, Johnny then meets all the dead and then Johnny and the gang (including the dead) are discussing the council's sale of Blackbury
Blackbury
Blackbury is a fictional English town, created by Terry Pratchett and featured in The Bromeliad and the Johnny Maxwell books.Its exact location is unclear, but it seems to be in South-West England, probably the somewhere in the downlands. A real Blackbury Castle exists in Devon, which might or...
's neglected cemetery to a faceless conglomerate who plan to build offices on it. Various dead citizens, led by a former town counciller, ask Johnny, the only person who can see them, to help stop it.

While Johnny, helped by his semi-believing friends, tries to find evidence of famous interees and speaks out at community meetings, the Dead begin to take an interest in the modern day, and realise they are not, as they believed, trapped in the cemetery.

By the end of the book the council is forced to back down, but the Dead no longer care because the day of judgment comes. However, the town's living residents have, thanks to the campaigning of Blackbury volunteers, rediscovered the cemetery as a link to their past. As one of the Dead puts it "The living must remember, and the dead must forget."

The book is loosely based on real events in Westminster
City of Westminster
The City of Westminster is a London borough occupying much of the central area of London, England, including most of the West End. It is located to the west of and adjoining the ancient City of London, directly to the east of the Royal Borough of Kensington and Chelsea, and its southern boundary...
in the 1980s, when the council sold three cemeteries as building land for 15p (Pratchett was working as a journalist at this time).

Part of the story deals with the last surviving member of the Blackbury
Blackbury
Blackbury is a fictional English town, created by Terry Pratchett and featured in The Bromeliad and the Johnny Maxwell books.Its exact location is unclear, but it seems to be in South-West England, probably the somewhere in the downlands. A real Blackbury Castle exists in Devon, which might or...
pals, a Pals battalion
Pals battalion
The Pals battalions of World War I were specially constituted units of the British Army comprising men who had enlisted together in local recruiting drives, with the promise that they would be able to serve alongside their friends, neighbours and work colleagues , rather than being arbitrarily...
with obvious parallel to the Accrington Pals
Accrington Pals
The Accrington Pals was a British First World War Pals battalion of Kitchener's Army raised in and around the town of Accrington in Lancashire. When the battalion was taken over by the British Army it was officially named the 11th Battalion, The East Lancashire Regiment.Recruiting was initiated by...
. This gentleman is called Tommy Atkins
Tommy Atkins
Tommy Atkins is a term for a common soldier in the British Army that was already well established in the 19th century, but is particularly associated with World War I. It can be used as a term of reference, or as a form of address. German soldiers would call out to "Tommy" across no man's land if...
, the name given to the generic British soldier of the day

A running joke in the book is that most of the Dead are "nearly famous", often being recognisable as very similar to a famous Briton. It is possible that Pratchett intends Blackbury Cemetery to be "nearly Highgate
Highgate Cemetery
Highgate Cemetery is a cemetery located in north London, England. It is designated Grade I on the English Heritage Register of Parks and Gardens of Special Historic Interest in England. It is divided into two parts, named the East and West cemetery....
", especially as one of the most prominent ghosts (William Stickers) is described as "The man who would have invented communism
Communism
Communism is a social, political and economic ideology that aims at the establishment of a classless, moneyless, revolutionary and stateless socialist society structured upon common ownership of the means of production...
if Karl Marx
Karl Marx
Karl Heinrich Marx was a German philosopher, economist, sociologist, historian, journalist, and revolutionary socialist. His ideas played a significant role in the development of social science and the socialist political movement...
hadn't."