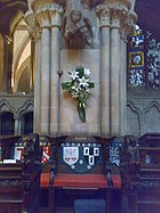 Yates was born in Burslem
Burslem
The town of Burslem, known as the Mother Town, is one of the six towns that amalgamated to form the current city of Stoke-on-Trent, in the ceremonial county of Staffordshire, in the Midlands of England.-Topography:...
, Staffordshire
Staffordshire
Staffordshire is a landlocked county in the West Midlands region of England. For Eurostat purposes, the county is a NUTS 3 region and is one of four counties or unitary districts that comprise the "Shropshire and Staffordshire" NUTS 2 region. Part of the National Forest lies within its borders...
on 17 April 1925 (some sources say South London). He was educated first at Battersea Grammar School
Battersea Grammar School
Battersea Grammar School was a Voluntary-Controlled Secondary Grammar School in South London. It was established in Battersea by the Sir Walter St John Trust in 1875 and moved to larger premises in Streatham in 1936....
, then after his evacuation
Evacuations of civilians in Britain during World War II
Evacuation of civilians in Britain during the Second World War was designed to save the population of urban or military areas in the United Kingdom from aerial bombing of cities and military targets such as docks. Civilians, particularly children, were moved to areas thought to be less at risk....
as a result of the outbreak of the Second World War he completed his schooling at Blackpool Grammar School
Collegiate High School, Blackpool
Collegiate High School is a secondary school in Layton, Blackpool, Lancashire, England. The school is a specialist in Sports and Maths.The school, which was previously called Collegiate High School Sports College, is located on Blackpool Old Road near the border with the Borough of Wyre and close...
.

He undertook war service in the Royal Air Force Volunteer Reserve
Royal Air Force Volunteer Reserve
The Royal Air Force Volunteer Reserve consists of a number of groupings of individual military reservists for the management and operation of the Royal Air Force's Air Training Corps and CCF Air Cadet formations, Volunteer Gliding Squadrons , Air Experience Flights, and also to form the...
becoming a bomb-aimer. Following the war, he went up to Jesus College
Jesus College, Cambridge
Jesus College is a constituent college of the University of Cambridge, England.The College was founded in 1496 on the site of a Benedictine nunnery by John Alcock, then Bishop of Ely...
, Cambridge
University of Cambridge
The University of Cambridge is a public research university located in Cambridge, United Kingdom. It is the second-oldest university in both the United Kingdom and the English-speaking world , and the seventh-oldest globally...
as a Scholar, taking a first-class degree in theology (some reports say history).

He then trained for ordination
Holy Orders
The term Holy Orders is used by many Christian churches to refer to ordination or to those individuals ordained for a special role or ministry....
at Lincoln Theological College
Lincoln Theological College
Lincoln Theological College was a theological college in Lincoln, United Kingdom.-History:It opened on 25 January 1874. It was also known as Scholae Cancellarii. The building on Drury Lane closed in 1995, after having its permit for ordination training withdrawn by the Church of England due to low...
and was ordained deacon
Deacon
Deacon is a ministry in the Christian Church that is generally associated with service of some kind, but which varies among theological and denominational traditions...
at St Paul's Cathedral
St Paul's Cathedral
St Paul's Cathedral, London, is a Church of England cathedral and seat of the Bishop of London. Its dedication to Paul the Apostle dates back to the original church on this site, founded in AD 604. St Paul's sits at the top of Ludgate Hill, the highest point in the City of London, and is the mother...
, before embarking on his ecclesiastical career with a curacy
Curate
A curate is a person who is invested with the care or cure of souls of a parish. In this sense "curate" correctly means a parish priest but in English-speaking countries a curate is an assistant to the parish priest...
at Christ Church, Southgate
Southgate, London
Southgate is an area of north London, England, primarily within the London Borough of Enfield, although parts of its western fringes lie within the London Borough of Barnet. It is located around north of Charing Cross. The name is derived from being the south gate to Enfield Chase...
, in north London
North London
North London is the northern part of London, England. It is an imprecise description and the area it covers is defined differently for a range of purposes. Common to these definitions is that it includes districts located north of the River Thames and is used in comparison with South...
. He married Jean Dover in 1954. They had one son and two daughters.

He had a second spell at Lincoln Theological College as Chaplain
Chaplain
Traditionally, a chaplain is a minister in a specialized setting such as a priest, pastor, rabbi, or imam or lay representative of a religion attached to a secular institution such as a hospital, prison, military unit, police department, university, or private chapel...
, (1954–59) and after a six years spent as a parish priest
Vicar
In the broadest sense, a vicar is a representative, deputy or substitute; anyone acting "in the person of" or agent for a superior . In this sense, the title is comparable to lieutenant...
at Bottesford
Bottesford, North Lincolnshire
Bottesford is a small town and civil parish in North Lincolnshire, England. It is joined to southern Scunthorpe, and is defined by the B1501 road to the north and Bottesford Beck to the south. The River Trent lies to the west, with a boundary line approximately along Grammar School Walk, Richmond...
-with-Ashby
Ashby
-Surname:* Alan Ashby , American baseball player* Alexander Essebiensis , English theologian and poet* Andy Ashby , American baseball player* Carl Ashby , American abstract expressionist artist...
on the outskirts of Scunthorpe
Scunthorpe
Scunthorpe is a town within North Lincolnshire, England. It is the administrative centre of the North Lincolnshire unitary authority, and had an estimated total resident population of 72,514 in 2010. A predominantly industrial town, Scunthorpe, the United Kingdom's largest steel processing centre,...
he was appointed as principal of Lichfield Theological College (1966–72). He also held the position of Prebendary
Prebendary
A prebendary is a post connected to an Anglican or Catholic cathedral or collegiate church and is a type of canon. Prebendaries have a role in the administration of the cathedral...
of Flixton
Flixton
Flixton could refer to the following places in England:*Flixton, Greater Manchester, part of the Metropolitan Borough of Trafford**Flixton F.C.**Flixton railway station**Flixton House**Flixton **Flixton Girls' High School**Flixton Junior School...
at Lichfield Cathedral
Lichfield Cathedral
Lichfield Cathedral is situated in Lichfield, Staffordshire, England. It is the only medieval English cathedral with three spires. The Diocese of Lichfield covers all of Staffordshire, much of Shropshire and part of the Black Country and West Midlands...
. The Lincoln college was threatened with closure, and Archbishop of York
Archbishop of York
The Archbishop of York is a high-ranking cleric in the Church of England, second only to the Archbishop of Canterbury. He is the diocesan bishop of the Diocese of York and metropolitan of the Province of York, which covers the northern portion of England as well as the Isle of Man...
Donald Coggan
Donald Coggan
Frederick Donald Coggan, Baron Coggan, PC was the 101st Archbishop of Canterbury from 1974 to 1980, during which time he visited Rome and met the Pontiff, in company with Bishop Cormac Murphy-O'Connor, future Cardinal of England and Wales.-Background:Coggan was born in Highgate, London, England...
invited him to become Bishop of Whitby
Bishop of Whitby
The Bishop of Whitby is an episcopal title used by a suffragan bishop of the Church of England Diocese of York, in the Province of York, England.The title takes its name after the town of Whitby in North Yorkshire...
(a suffragan bishop
Suffragan bishop
A suffragan bishop is a bishop subordinate to a metropolitan bishop or diocesan bishop. He or she may be assigned to an area which does not have a cathedral of its own.-Anglican Communion:...
in the Diocese of York
Diocese of York
The Diocese of York is an administrative division of the Church of England, part of the Province of York. It covers the city of York, the eastern part of North Yorkshire, and most of the East Riding of Yorkshire....
) in 1972. In 1975, he was nominated as Bishop of Gloucester
Bishop of Gloucester
The Bishop of Gloucester is the Ordinary of the Church of England Diocese of Gloucester in the Province of Canterbury.The diocese covers the County of Gloucestershire and part of the County of Worcestershire and has its see in the City of Gloucester where the seat is located at the Cathedral Church...
, one of the early appointments of the new Crown Appointments Commission. He and his first wife carried on a practical ministry, daily distributing tea and sandwiches to homeless callers.

In 1979, he chaired a group of 12 scholars appointed by the General Synod
General Synod
-Church of England:In the Church of England, the General Synod, which was established in 1970 , is the legislative body of the Church.-Episcopal Church of the United States:...
's Board for Social Responsibility which produced a report on homosexual relationships. The Gloucester Report controversially contemplated homosexual relationships "involving a physical expression of sexual love". He was also involved in peace efforts in Central America in 1987 and 1988. He led the UK delegation to a conference of the World Council of Churches
World Council of Churches
The World Council of Churches is a worldwide fellowship of 349 global, regional and sub-regional, national and local churches seeking unity, a common witness and Christian service. It is a Christian ecumenical organization that is based in the Ecumenical Centre in Geneva, Switzerland...
in Basle. He was chair of the General Synod Board for Social Responsibility from 1987 to 1991.

His first wife died in 1995. He remarried in 1998, to the Reverend Beryl Wensley. His second wife died in 2006 (some reports say 2007). He died in Winchester
Winchester
Winchester is a historic cathedral city and former capital city of England. It is the county town of Hampshire, in South East England. The city lies at the heart of the wider City of Winchester, a local government district, and is located at the western end of the South Downs, along the course of...
.
The source of this article is wikipedia, the free encyclopedia.  The text of this article is licensed under the GFDL.