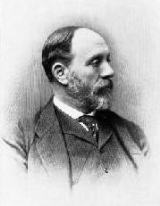 Encyclopedia
Sir John Wolfe-Barry was an English civil engineer
Civil engineer
A civil engineer is a person who practices civil engineering; the application of planning, designing, constructing, maintaining, and operating infrastructures while protecting the public and environmental health, as well as improving existing infrastructures that have been neglected.Originally, a...
of the late 19th and early 20th century. His most famous project was the construction of Tower Bridge
Tower Bridge
Tower Bridge is a combined bascule and suspension bridge in London, England, over the River Thames. It is close to the Tower of London, from which it takes its name...
over the River Thames in London
London
London is the capital city of :England and the :United Kingdom, the largest metropolitan area in the United Kingdom, and the largest urban zone in the European Union by most measures. Located on the River Thames, London has been a major settlement for two millennia, its history going back to its...
.

Wolfe-Barry, the youngest son of architect
Architect
An architect is a person trained in the planning, design and oversight of the construction of buildings. To practice architecture means to offer or render services in connection with the design and construction of a building, or group of buildings and the space within the site surrounding the...
Sir Charles Barry
Charles Barry
Sir Charles Barry FRS was an English architect, best known for his role in the rebuilding of the Palace of Westminster in London during the mid-19th century, but also responsible for numerous other buildings and gardens.- Background and training :Born on 23 May 1795 in Bridge Street, Westminster...
, added "Wolfe" to his inherited name in 1898. He was educated at Glenalmond
Glenalmond College
Glenalmond College is a co-educational independent boarding school in Perth and Kinross, Scotland, for children aged between 12 and 18 years. It is situated on the River Almond near the village of Methven, about west of the city of Perth. The school's motto is Floreat Glenalmond...
and King's College London
King's College London
King's College London is a public research university located in London, United Kingdom and a constituent college of the federal University of London. King's has a claim to being the third oldest university in England, having been founded by King George IV and the Duke of Wellington in 1829, and...
, and was a pupil of civil engineer Sir John Hawkshaw
John Hawkshaw
Sir John Hawkshaw , was an English civil engineer.-Early life:He was born in Leeds, Yorkshire and was educated at Leeds Grammar School...
, as was Henry Marc Brunel, son of the great Isambard Kingdom Brunel
Isambard Kingdom Brunel
Isambard Kingdom Brunel, FRS , was a British civil engineer who built bridges and dockyards including the construction of the first major British railway, the Great Western Railway; a series of steamships, including the first propeller-driven transatlantic steamship; and numerous important bridges...
. Barry and Hawkshaw worked on railway bridge crossings across the Thames, among other projects (Brunel pursued his own business from 1871, but in 1878 went into partnership with Barry). Barry began his own practice in 1867, and carried out more work for the railways.

However, it was Tower Bridge that really made Wolfe-Barry's name. In 1878, architect
Architect
An architect is a person trained in the planning, design and oversight of the construction of buildings. To practice architecture means to offer or render services in connection with the design and construction of a building, or group of buildings and the space within the site surrounding the...
Horace Jones first proposed a low-level bascule
Bascule
Bascule may refer to:* A Bascule bridge, a moveable bridge with a counterweight that continuously balances the span, or "leaf," throughout the entire upward swing in providing clearance for boat traffic...
bridge. An Act of Parliament allowing the Corporation of the City of London
City of London
The City of London is a small area within Greater London, England. It is the historic core of London around which the modern conurbation grew and has held city status since time immemorial. The City’s boundaries have remained almost unchanged since the Middle Ages, and it is now only a tiny part of...
to build it was passed in 1885. Jones was appointed architect, and knighted, but died the same year. Wolfe-Barry, already well-established with experience of bridges across the Thames, then took control.

His other projects included:

In 1902 Wolfe-Barry joined the consulting firm Robert White & Partners, and it was renamed Wolfe-Barry, Robert White & Partners (later, 1946, Sir Bruce White, Wolfe Barry and Partners – now part of London-based consultancy Hyder Consultants
Hyder Consulting
Hyder Consulting is a multi-national advisory and design consultancy with particular specialisation in the transport, property, utilities and environmental sectors. The firm employs approximately 4,200 people across the UK, Europe, Germany, Middle East, Asia and Australia and has been listed on the...
).

Wolfe-Barry died in January 1918 and was buried in Brookwood Cemetery
Brookwood Cemetery
Brookwood Cemetery is a burial ground in Brookwood, Surrey, England. It is the largest cemetery in the United Kingdom and one of the largest in western Europe.-History:...
near Woking
Woking
Woking is a large town and civil parish that shares its name with the surrounding local government district, located in the west of Surrey, UK. It is part of the Greater London Urban Area and the London commuter belt, with frequent trains and a journey time of 24 minutes to Waterloo station....
in Surrey
Surrey
Surrey is a county in the South East of England and is one of the Home Counties. The county borders Greater London, Kent, East Sussex, West Sussex, Hampshire and Berkshire. The historic county town is Guildford. Surrey County Council sits at Kingston upon Thames, although this has been part of...
.