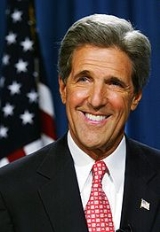 The son of an Army Air Corps
United States Army Air Corps
The United States Army Air Corps was a forerunner of the United States Air Force. Renamed from the Air Service on 2 July 1926, it was part of the United States Army and the predecessor of the United States Army Air Forces , established in 1941...
serviceman, Kerry was born in Aurora, Colorado
Aurora, Colorado
City of Aurora is a Home Rule Municipality spanning Arapahoe, Adams, and Douglas counties in Colorado. Aurora is an eastern suburb of the Denver-Aurora-Broomfield, CO Metropolitan Statistical Area . The city is the third most populous city in the Colorado and the 56th most populous city in the...
. He attended boarding school in Massachusetts and New Hampshire
New Hampshire
New Hampshire is a state in the New England region of the northeastern United States of America. The state was named after the southern English county of Hampshire. It is bordered by Massachusetts to the south, Vermont to the west, Maine and the Atlantic Ocean to the east, and the Canadian...
and went on to graduate from Yale University
Yale University
Yale University is a private, Ivy League university located in New Haven, Connecticut, United States. Founded in 1701 in the Colony of Connecticut, the university is the third-oldest institution of higher education in the United States...
class of 1966, where he majored in political science
Political science
Political Science is a social science discipline concerned with the study of the state, government and politics. Aristotle defined it as the study of the state. It deals extensively with the theory and practice of politics, and the analysis of political systems and political behavior...
.

We feel we have been used in the worst fashion by the administration of this country. ... And we cannot consider ourselves America's best men when we are ashamed of and hated what we were called on to do in Southeast Asia.

Wikisource:Vietnam Veterans Against the War Statement|Testimony before subcommittees of the U.S. Senate, April, 1971

I voted to hold Saddam Hussein accountable. I knew we had to hold him accountable. There's never been a doubt about that. But I also know that if we had done this with a sufficient number of troops, if we had done this in a globalized way, if we had brought more people to the table, we might have caught Saddam Hussein sooner. We might have had less loss of life. We would be in a stronger position today with respect to what we're doing.

I actually did vote for the $87 billion before I voted against it.