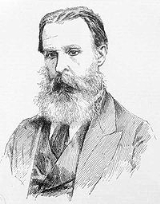 Encyclopedia
Sir John Coode English
England
England is a country that is part of the United Kingdom. It shares land borders with Scotland to the north and Wales to the west; the Irish Sea is to the north west, the Celtic Sea to the south west, with the North Sea to the east and the English Channel to the south separating it from continental...
civil engineer
Civil engineer
A civil engineer is a person who practices civil engineering; the application of planning, designing, constructing, maintaining, and operating infrastructures while protecting the public and environmental health, as well as improving existing infrastructures that have been neglected.Originally, a...
, was born at Bodmin
Bodmin
Bodmin is a civil parish and major town in Cornwall, England, United Kingdom. It is situated in the centre of the county southwest of Bodmin Moor.The extent of the civil parish corresponds fairly closely to that of the town so is mostly urban in character...
, Cornwall
Cornwall
Cornwall is a unitary authority and ceremonial county of England, within the United Kingdom. It is bordered to the north and west by the Celtic Sea, to the south by the English Channel, and to the east by the county of Devon, over the River Tamar. Cornwall has a population of , and covers an area of...
, the son of a solicitor. After considerable experience as an engineer in the west of England he came to London
London
London is the capital city of :England and the :United Kingdom, the largest metropolitan area in the United Kingdom, and the largest urban zone in the European Union by most measures. Located on the River Thames, London has been a major settlement for two millennia, its history going back to its...
, and from 1844 to 1847 had a consulting practice in Westminster
Westminster
Westminster is an area of central London, within the City of Westminster, England. It lies on the north bank of the River Thames, southwest of the City of London and southwest of Charing Cross...
.

In the latter year he was appointed resident engineer in charge of the extensive national harbour works at Portland
Portland Harbour
Portland Harbour is located beside the Isle of Portland, off Dorset, on the south coast of England. It is one of the largest man-made harbours in the world. Grid reference: .-History:...
then in progress. In 1856 he was appointed engineer-in-chief of this undertaking, and this post he retained till the completion of the works in 1872. His services at Portland were rewarded with a knighthood. He was now recognised as the 19th century's leading authority on harbour construction, and his advice was sought by many of the colonial governments, especially by those of South Africa
South Africa
The Republic of South Africa is a country in southern Africa. Located at the southern tip of Africa, it is divided into nine provinces, with of coastline on the Atlantic and Indian oceans...
, New Zealand
New Zealand
New Zealand is an island country in the south-western Pacific Ocean comprising two main landmasses and numerous smaller islands. The country is situated some east of Australia across the Tasman Sea, and roughly south of the Pacific island nations of New Caledonia, Fiji, and Tonga...
, Australia
Australia
Australia , officially the Commonwealth of Australia, is a country in the Southern Hemisphere comprising the mainland of the Australian continent, the island of Tasmania, and numerous smaller islands in the Indian and Pacific Oceans. It is the world's sixth-largest country by total area...
, and by the India
India
India , officially the Republic of India , is a country in South Asia. It is the seventh-largest country by geographical area, the second-most populous country with over 1.2 billion people, and the most populous democracy in the world...
n government.

After the Portland Harbour his best-known work is the harbour of Colombo
Colombo
Colombo is the largest city of Sri Lanka. It is located on the west coast of the island and adjacent to Sri Jayawardenapura Kotte, the capital of Sri Lanka. Colombo is often referred to as the capital of the country, since Sri Jayawardenapura Kotte is a satellite city of Colombo...
, Ceylon (now Sri Lanka
Sri Lanka
Sri Lanka, officially the Democratic Socialist Republic of Sri Lanka is a country off the southern coast of the Indian subcontinent. Known until 1972 as Ceylon , Sri Lanka is an island surrounded by the Indian Ocean, the Gulf of Mannar and the Palk Strait, and lies in the vicinity of India and the...
). He was also responsible for the straightening of the lower reaches of the Yarra River
Yarra River
The Yarra River, originally Birrarung, is a river in east-central Victoria, Australia. The lower stretches of the river is where the city of Melbourne was established in 1835 and today Greater Melbourne dominates and influences the landscape of its lower reaches...
in Melbourne
Melbourne
Melbourne is the capital and most populous city in the state of Victoria, and the second most populous city in Australia. The Melbourne City Centre is the hub of the greater metropolitan area and the Census statistical division—of which "Melbourne" is the common name. As of June 2009, the greater...
, Australia
Australia
Australia , officially the Commonwealth of Australia, is a country in the Southern Hemisphere comprising the mainland of the Australian continent, the island of Tasmania, and numerous smaller islands in the Indian and Pacific Oceans. It is the world's sixth-largest country by total area...
with the resulting district of Coode Island named for him.

He was made a K.C.M.G.
Order of St Michael and St George
The Most Distinguished Order of Saint Michael and Saint George is an order of chivalry founded on 28 April 1818 by George, Prince Regent, later George IV of the United Kingdom, while he was acting as Prince Regent for his father, George III....
in 1886. From 1884 till his death he was a member of the Suez Canal
Suez Canal
The Suez Canal , also known by the nickname "The Highway to India", is an artificial sea-level waterway in Egypt, connecting the Mediterranean Sea and the Red Sea. Opened in November 1869 after 10 years of construction work, it allows water transportation between Europe and Asia without navigation...
Commission, and from 1889 to 1891 president of the Institution of Civil Engineers
Institution of Civil Engineers
Founded on 2 January 1818, the Institution of Civil Engineers is an independent professional association, based in central London, representing civil engineering. Like its early membership, the majority of its current members are British engineers, but it also has members in more than 150...
. He died at Brighton
Brighton
Brighton is the major part of the city of Brighton and Hove in East Sussex, England on the south coast of Great Britain...
on 2 March 1892.