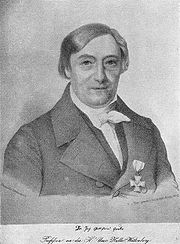 Johann Gottfried Gruber was a German
Germany
Germany , officially the Federal Republic of Germany , is a federal parliamentary republic in Europe. The country consists of 16 states while the capital and largest city is Berlin. Germany covers an area of 357,021 km2 and has a largely temperate seasonal climate...
critic
Critic
A critic is anyone who expresses a value judgement. Informally, criticism is a common aspect of all human expression and need not necessarily imply skilled or accurate expressions of judgement. Critical judgements, good or bad, may be positive , negative , or balanced...
and literary historian.

Gruber was born at Naumburg
Naumburg
Naumburg is a town in Germany, on the Saale River. It is in the district Burgenlandkreis in the Bundesland of Saxony-Anhalt. It is approximately southwest of Leipzig, south-southwest of Halle, and north-northeast of Jena....
on the Saale
Saale
The Saale, also known as the Saxon Saale and Thuringian Saale , is a river in Germany and a left-bank tributary of the Elbe. It is not to be confused with the smaller Franconian Saale, a right-bank tributary of the Main, or the Saale in Lower Saxony, a tributary of the Leine.-Course:The Saale...
.

He received his education at the town school of Naumburg and the University of Leipzig
University of Leipzig
The University of Leipzig , located in Leipzig in the Free State of Saxony, Germany, is one of the oldest universities in the world and the second-oldest university in Germany...
, after which he resided successively at Göttingen, Leipzig, Jena and Weimar, occupying himself partly in teaching and partly in various literary enterprises, and enjoying in Weimar the friendship of Herder, Wieland
Christoph Martin Wieland
Christoph Martin Wieland was a German poet and writer.- Biography :He was born at Oberholzheim , which then belonged to the Free Imperial City of Biberach an der Riss in the south-east of the modern-day state of Baden-Württemberg...
and Goethe
Johann Wolfgang von Goethe
Johann Wolfgang von Goethe was a German writer, pictorial artist, biologist, theoretical physicist, and polymath. He is considered the supreme genius of modern German literature. His works span the fields of poetry, drama, prose, philosophy, and science. His Faust has been called the greatest long...
.

In 1811 he was appointed professor at the University of Wittenberg, and after the division of Saxony he was sent by the senate to Berlin
Berlin
Berlin is the capital city of Germany and is one of the 16 states of Germany. With a population of 3.45 million people, Berlin is Germany's largest city. It is the second most populous city proper and the seventh most populous urban area in the European Union...
to negotiate the union of the University of Wittenberg with that of Halle. After the union was effected he became in 1815 professor of philosophy
Philosophy
Philosophy is the study of general and fundamental problems, such as those connected with existence, knowledge, values, reason, mind, and language. Philosophy is distinguished from other ways of addressing such problems by its critical, generally systematic approach and its reliance on rational...
at Halle. He was associated with Johann Samuel Ersch
Johann Samuel Ersch
Johann Samuel Ersch was a German bibliographer, generally regarded as the founder of German bibliography.-Biography:...
in the editorship of the great work Allgemeine Encyclopädie der Wissenschaften und Künste
Allgemeine Encyclopädie der Wissenschaften und Künste
The Allgemeine Encyclopädie der Wissenschaften und Künste was a 19th-century German encyclopaedia published by Johann Samuel Ersch and Johann Gottfried Gruber, therefore also known as the "Ersch-Gruber." One of the most ambitious encyclopaedia projects ever, it remained uncompleted.It was designed...
; and after the death of Ersch he continued the first section from vol. xviii. to vol. liv. He also succeeded Ersch in the editorship of the Allgemeine Literaturzeitung.

Gruber was the author of a large number of works, the principal of which are Charakteristik Herders (Leipzig, 1805), in conjunction with Johann TL Danz (1769–1851), afterwards professor of theology
Theology
Theology is the systematic and rational study of religion and its influences and of the nature of religious truths, or the learned profession acquired by completing specialized training in religious studies, usually at a university or school of divinity or seminary.-Definition:Augustine of Hippo...
at Jena; Geschichte des menschlichen Geschlechts (2 vols, Leipzig, 1806); Wörterbuch der altklassischen Mythologie (3 vols, Weimar, 1810–1815); a life of Christoph Martin Wieland
Christoph Martin Wieland
Christoph Martin Wieland was a German poet and writer.- Biography :He was born at Oberholzheim , which then belonged to the Free Imperial City of Biberach an der Riss in the south-east of the modern-day state of Baden-Württemberg...
(Wielands Leben, 2 parts, Weimar, 1815–1816), and of Friedrich Gottlieb Klopstock
Friedrich Gottlieb Klopstock
Friedrich Gottlieb Klopstock was a German poet.-Biography:Klopstock was born at Quedlinburg, the eldest son of a lawyer.Both in his birthplace and on the estate of Friedeburg on the Saale, which his father later rented, young Klopstock passed a happy childhood; and more attention having been given...
(Klopstocks Leben, Weimar, 1832). He also edited Wieland's collected works (Wielands sämmtliche Werke, Leipzig, 1818–1828).
The source of this article is wikipedia, the free encyclopedia.  The text of this article is licensed under the GFDL.