Encyclopedia
Johann Elert Bode was a German
Germany
Germany , officially the Federal Republic of Germany , is a federal parliamentary republic in Europe. The country consists of 16 states while the capital and largest city is Berlin. Germany covers an area of 357,021 km2 and has a largely temperate seasonal climate...
astronomer
Astronomer
An astronomer is a scientist who studies celestial bodies such as planets, stars and galaxies.Historically, astronomy was more concerned with the classification and description of phenomena in the sky, while astrophysics attempted to explain these phenomena and the differences between them using...
known for his reformulation and popularization of the Titius-Bode law
Titius-Bode law
The Titius–Bode law is a hypothesis that the bodies in some orbital systems, including the Sun's, orbit at semi-major axes in a function of planetary sequence...
. Bode determined the orbit
Orbit
In physics, an orbit is the gravitationally curved path of an object around a point in space, for example the orbit of a planet around the center of a star system, such as the Solar System...
of Uranus
Uranus
Uranus is the seventh planet from the Sun. It has the third-largest planetary radius and fourth-largest planetary mass in the Solar System. It is named after the ancient Greek deity of the sky Uranus , the father of Cronus and grandfather of Zeus...
and suggested the planet's name.

Bode was born in Hamburg
Hamburg
-History:The first historic name for the city was, according to Claudius Ptolemy's reports, Treva.But the city takes its modern name, Hamburg, from the first permanent building on the site, a castle whose construction was ordered by the Emperor Charlemagne in AD 808...
. As a youth, he suffered from a serious eye disease which particularly damaged his right eye; he continued to have trouble with his eyes throughout his life.

He began his career with the publication of a short work on the solar eclipse of 5 August 1766. This was followed by an elementary treatise on astronomy entitled Anleitung zur Kenntniss des gestirnten Himmels (1768, 10th ed. 1844), the success of which led to his being summoned to Berlin in 1772 for the purpose of computing ephemerides on an improved plan. There he founded, in 1774, the well-known Astronomisches Jahrbuch, 51 yearly volumes of which he compiled and issued.

He became director of the Berlin
Berlin
Berlin is the capital city of Germany and is one of the 16 states of Germany. With a population of 3.45 million people, Berlin is Germany's largest city. It is the second most populous city proper and the seventh most populous urban area in the European Union...
observatory in 1786, from which he retired in 1825.
There he published the Uranographia in 1801, a celestial atlas that aimed both at scientific accuracy in showing the positions of star
Star
A star is a massive, luminous sphere of plasma held together by gravity. At the end of its lifetime, a star can also contain a proportion of degenerate matter. The nearest star to Earth is the Sun, which is the source of most of the energy on Earth...
s and other astronomical object
Astronomical object
Astronomical objects or celestial objects are naturally occurring physical entities, associations or structures that current science has demonstrated to exist in the observable universe. The term astronomical object is sometimes used interchangeably with astronomical body...
s, as well as the artistic interpretation of the stellar constellation
Constellation
In modern astronomy, a constellation is an internationally defined area of the celestial sphere. These areas are grouped around asterisms, patterns formed by prominent stars within apparent proximity to one another on Earth's night sky....
figures. The Uranographia marks the climax of an epoch of artistic representation of the constellations. Later atlases showed fewer and fewer elaborate figures until they were no longer printed on such tables.

Bode also published another small star atlas, intended for astronomical amateurs (Vorstellung der Gestirne). He is credited with the discovery of Bode's Galaxy (M81). Comet Bode (C/1779 A1) is named after him; its orbit was calculated by Erik Prosperin
Erik Prosperin
Erik Prosperin was a Swedish astronomer.Prosperin was a lecturer in mathematics and physics at Uppsala University in 1767, professor of observational astronomy in 1773 – 1796, and professor of Astronomy in 1797 – 1798...
. 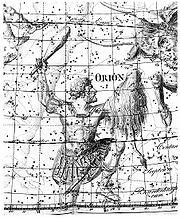 Verzeichniss (Containing the above star atlas, and including 5,058 stars observed by Flamsteed, Hevelius
Johannes Hevelius
Johannes Hevelius Some sources refer to Hevelius as Polish:Some sources refer to Hevelius as German:*Encyplopedia Britannica * of the Royal Society was a councilor and mayor of Danzig , Pomeranian Voivodeship, in the Polish-Lithuanian Commonwealth...
, T. Mayer
Tobias Mayer
Tobias Mayer was a German astronomer famous for his studies of the Moon.He was born at Marbach, in Württemberg, and brought up at Esslingen in poor circumstances. A self-taught mathematician, he had already published two original geometrical works when, in 1746, he entered J.B. Homann's...
, de la Caille
Nicolas Louis de Lacaille
Abbé Nicolas Louis de Lacaille was a French astronomer.He is noted for his catalogue of nearly 10,000 southern stars, including 42 nebulous objects. This catalogue, called Coelum Australe Stelliferum, was published posthumously in 1763. It introduced 14 new constellations which have since become...
, Messier
Charles Messier
Charles Messier was a French astronomer most notable for publishing an astronomical catalogue consisting of deep sky objects such as nebulae and star clusters that came to be known as the 110 "Messier objects"...
, le Monnier
Pierre Charles Le Monnier
Pierre Charles Le Monnier was a French astronomer. His name is sometimes given as Lemonnier.-Biography:...
, Darquier
Antoine Darquier de Pellepoix
Antoine Darquier de Pellepoix was a French astronomer. He discovered the Ring Nebula in 1779.-External links:* *...
and Bode himself.)
Allgemeine Beschreibung und Nachweisung der Gestirne (A star catalogue listing 17,240 stars.)

His works were highly effective in diffusing throughout Germany a taste for astronomy.

- Acta Historica Astronomiae, Vol. 30 - A new, comprehensive biography and the source for some of the material on this page.