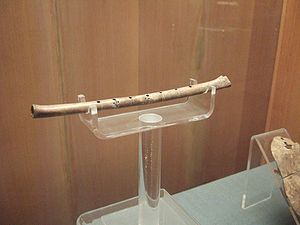 Jiahu was the site of a Neolithic
Neolithic
The Neolithic Age, Era, or Period, or New Stone Age, was a period in the development of human technology, beginning about 9500 BC in some parts of the Middle East, and later in other parts of the world. It is traditionally considered as the last part of the Stone Age...
Yellow River
Yellow River
The Yellow River or Huang He, formerly known as the Hwang Ho, is the second-longest river in China and the sixth-longest in the world at the estimated length of . Originating in the Bayan Har Mountains in Qinghai Province in western China, it flows through nine provinces of China and empties into...
settlement based in the central plains of ancient China
China
Chinese civilization may refer to:* China for more general discussion of the country.* Chinese culture* Greater China, the transnational community of ethnic Chinese.* History of China* Sinosphere, the area historically affected by Chinese culture...
, modern Wuyang, Henan Province. Archaeologists consider the site to be one of the earliest examples of the Peiligang culture
Peiligang culture
The Peiligang culture is a name given by archaeologists to a group of Neolithic communities in the Yi-Luo river basin in Henan Province, China. The culture existed from 7000 BC to 5000 BC. Over 70 sites have been identified with the Peiligang culture. The culture is named after the site discovered...
. Settled from 7000 to 5800 BC, the site was later flooded and abandoned. The settlement was surrounded by a moat and covered an area of 55,000 square metres. Discovered by Zhu Zhi in 1962, extensive excavation of the site did not occur until much later. Most of the site still has not been excavated.

The inhabitants of Jiahu cultivated foxtail millet
Foxtail millet
Foxtail millet is the second most widely planted species of millet, and the most important in East Asia. It has the longest history of cultivation among the millets, having been grown in China since sometime in the sixth millennium BC...
and rice
Rice
Rice is the seed of the monocot plants Oryza sativa or Oryza glaberrima . As a cereal grain, it is the most important staple food for a large part of the world's human population, especially in East Asia, Southeast Asia, South Asia, the Middle East, and the West Indies...
. While millet cultivation is common among the Peiligang culture, rice cultivation at Jiahu is unique. Jiahu rice cultivation is one of the earliest found, and the most northerly found at such an early stage in history.

Over 300 burials have been unearthed at Jiahu, accompanied by burial offerings. Burial objects range from pottery to tortoise shells. One of the most significant offerings discovered were playable tonal flutes
Gudi (instrument)
The Jiahu gǔdí is the oldest known musical instrument from China, dating back to around 6000 BC. Gudi literally means "bone flute".- History :...
made from Red-crowned Crane
Red-crowned Crane
The Red-crowned Crane , also called the Japanese Crane or Manchurian Crane , is a large east Asian crane and among the rarest cranes in the world...
wing bones. The oldest phase at Jiahu only contains two flutes, which are tetratonic and pentatonic. The middle phase at Jiahu contains several flutes, including an interesting pair of hexatonic flutes. One of the flutes was broken, and the other flute seems to be a replica of the first flute, as it shows evidence of adjustments made to match the pitch of the first. Innovations in the last phase include the use of heptatonic flutes.

Jiahu yielded some of the oldest pottery
Pottery
Pottery is the material from which the potteryware is made, of which major types include earthenware, stoneware and porcelain. The place where such wares are made is also called a pottery . Pottery also refers to the art or craft of the potter or the manufacture of pottery...
yet found in Neolithic China. Scientists from the University of Pennsylvania
University of Pennsylvania
The University of Pennsylvania is a private, Ivy League university located in Philadelphia, Pennsylvania, United States. Penn is the fourth-oldest institution of higher education in the United States,Penn is the fourth-oldest using the founding dates claimed by each institution...
applied chemical analysis to pottery jars from Jiahu and found evidence of alcohol
Alcohol
In chemistry, an alcohol is an organic compound in which the hydroxy functional group is bound to a carbon atom. In particular, this carbon center should be saturated, having single bonds to three other atoms....
fermented from rice, honey and hawthorn
Rhaphiolepis
Rhaphiolepis syn. Raphiolepis Lindl.) is a genus of about 15 species of evergreen shrubs and small trees in the family Rosaceae, native to warm temperate and subtropical eastern and southeastern Asia, from southern Japan, southern Korea and southern China south to Thailand and Vietnam. The genus is...
. Researchers hypothesize that the alcohol was fermented by the process of mold saccharification.

At Jiahu, archaeologists identified eleven markings of Jiahu symbols
Jiahu symbols
Jiahu symbols refer to the 16 distinct markings on prehistoric artifacts found in Jiahu, a neolithic Peiligang culture site found in Henan, China, and excavated in 1999 C.E...
, nine on tortoise shells and two on bone, as possible evidence for proto-writing
History of writing
The history of writing records the development of expressing language by letters or other marks. In the history of how systems of representation of language through graphic means have evolved in different human civilizations, more complete writing systems were preceded by proto-writing, systems of...
. The markings correspond to the middle phase. Some of the markings are quite similar to later Chinese characters; two of the most intriguing marks appear to be similar to later characters for eye (目) and sun (日). However, correspondence of many early non-writing symbols with the Shang dynasty
Shang Dynasty
The Shang Dynasty or Yin Dynasty was, according to traditional sources, the second Chinese dynasty, after the Xia. They ruled in the northeastern regions of the area known as "China proper" in the Yellow River valley...
period oracle bone
Oracle bone
Oracle bones are pieces of bone normally from ox scapula or turtle plastron which were used for divination chiefly during the late Shang Dynasty. The bones were first inscribed with divination in oracle bone script by using a bronze pin, and then heated until crack lines appeared in which the...
writing is to be expected, given the pictographic style of many of the Shang characters.