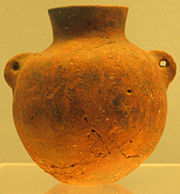 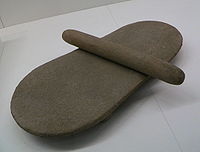 The Peiligang culture is a name given by archaeologists to a group of Neolithic
Neolithic
The Neolithic Age, Era, or Period, or New Stone Age, was a period in the development of human technology, beginning about 9500 BC in some parts of the Middle East, and later in other parts of the world. It is traditionally considered as the last part of the Stone Age...
communities in the Yi-Luo river basin
Luo River (Henan)
The Luo River is a tributary of the Yellow River in China. It rises in the southeast flank of Huashan in Shaanxi province and flows east into Henan province, where it eventually joins the Yellow River at the city of Gongyi...
in Henan Province, China
China
Chinese civilization may refer to:* China for more general discussion of the country.* Chinese culture* Greater China, the transnational community of ethnic Chinese.* History of China* Sinosphere, the area historically affected by Chinese culture...
. The culture existed from 7000 BC to 5000 BC. Over 70 sites have been identified with the Peiligang culture. The culture is named after the site discovered in 1977 at Peiligang (in Xinzheng
Xinzheng
Xinzheng is a small county-level city of Zhengzhou in the south of Henan province of Central China. The city has a population of 600,000 people and covers an area of .-History:...
county). Archaeologists think that the Peiligang culture was egalitarian, with little political organization.

The culture practiced agriculture in the form of cultivating millet
Millet
The millets are a group of small-seeded species of cereal crops or grains, widely grown around the world for food and fodder. They do not form a taxonomic group, but rather a functional or agronomic one. Their essential similarities are that they are small-seeded grasses grown in difficult...
and animal husbandry in the form of raising pig
Pig
A pig is any of the animals in the genus Sus, within the Suidae family of even-toed ungulates. Pigs include the domestic pig, its ancestor the wild boar, and several other wild relatives...
s. The culture is also one of the oldest in ancient China to make pottery
Pottery
Pottery is the material from which the potteryware is made, of which major types include earthenware, stoneware and porcelain. The place where such wares are made is also called a pottery . Pottery also refers to the art or craft of the potter or the manufacture of pottery...
.

The site at Jiahu
Jiahu
Jiahu was the site of a Neolithic Yellow River settlement based in the central plains of ancient China, modern Wuyang, Henan Province. Archaeologists consider the site to be one of the earliest examples of the Peiligang culture. Settled from 7000 to 5800 BC, the site was later flooded and abandoned...
is one of the earliest sites associated with this culture.