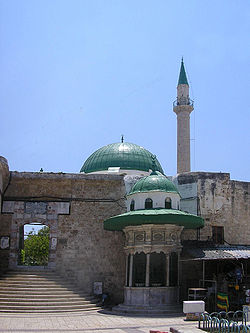 Ahmed al-Jazzar was the Ottoman
Ottoman Empire
The Ottoman EmpireIt was usually referred to as the "Ottoman Empire", the "Turkish Empire", the "Ottoman Caliphate" or more commonly "Turkey" by its contemporaries...
ruler
Wali
Walī , is an Arabic word meaning "custodian", "protector", "sponsor", or authority as denoted by its definition "crown". "Wali" is someone who has "Walayah" over somebody else. For example, in Fiqh the father is wali of his children. In Islam, the phrase ولي الله walīyu 'llāh...
of Acre and the Galilee
Galilee
Galilee , is a large region in northern Israel which overlaps with much of the administrative North District of the country. Traditionally divided into Upper Galilee , Lower Galilee , and Western Galilee , extending from Dan to the north, at the base of Mount Hermon, along Mount Lebanon to the...
from 1775 until his death.

Jazzar Pasha was a Christian slave boy from Bosnia who, escaping after committing a murder, sold himself to the slave -markets of Istanbul. There he was bought by an Egyptian ruler who converted him to Islam and used him as his chief executioner and hit-man. He began his rise as governor of Cairo but made his name defending Beirut against Catherine the Great´s navy. Beirut was honorably surrendered to the Russians after a long siege and the sultan rewarded al-Jazzar with promotion to Governor of Sidon, and sometimes also that of Damascus. He set up his capital in Acre after the fall of Dhaher al-Omar. He earned the nickname "the Butcher" for his cruelty and extortion of his subjects. He is reputed to have walked around with a mobile gallows in case anyone displeased him.

Jazzar Pasha is best known for defending Acre against Napoleon Bonaparte
Napoleon I of France
Napoleon Bonaparte was a French military and political leader during the latter stages of the French Revolution.As Napoleon I, he was Emperor of the French from 1804 to 1815...
during the siege of Acre in 1799
Siege of Acre (1799)
The Siege of Acre of 1799 was an unsuccessful French siege of the Ottoman-defended, walled city of Acre and was the turning point of Napoleon's invasion of Egypt and Syria.-Background:...
. After Napoleon's capture of Egypt, then an Ottoman
Ottoman Empire
The Ottoman EmpireIt was usually referred to as the "Ottoman Empire", the "Turkish Empire", the "Ottoman Caliphate" or more commonly "Turkey" by its contemporaries...
territory, the French army attempted to invade Syria
Syria
Syria , officially the Syrian Arab Republic , is a country in Western Asia, bordering Lebanon and the Mediterranean Sea to the West, Turkey to the north, Iraq to the east, Jordan to the south, and Israel to the southwest....
and Palestine
Palestine
Palestine is a conventional name, among others, used to describe the geographic region between the Mediterranean Sea and the Jordan River, and various adjoining lands....
. Although the French captured Al-Arish and Jaffa, and won every battle they fought against the Ottomans on an open field, they were unable to breach the fortifications of Acre. Their army was weakened by disease and cut off from resupply. The success was due to the english Commodore William Sidney Smith too, who sailed to Acre and helped the Turkish commander reinforce the defences and old walls and supplied him with additional cannon manned by sailors and Marines
Royal Marines
The Corps of Her Majesty's Royal Marines, commonly just referred to as the Royal Marines , are the marine corps and amphibious infantry of the United Kingdom and, along with the Royal Navy and Royal Fleet Auxiliary, form the Naval Service...
from his ships. Smith also used his command of the sea to capture the French siege artillery being sent by ship from Egypt and to deny the French army the use of the coastal road from Jaffa by bombarding the troops from the sea.

Though both Napoleon and Jazzar requested assistance from the Shihab leader, Bashir
Bashir Shihab II
Bashir Chehab II was a Lebanese emir who ruled Lebanon in the first half of the 19th century.-Life:Bashir was born 2 January 1767 , son of Emir Qasim ibn Umar Chehab of the noble Chehab family which had came to power in 1697...
, ruler of much of present-day Lebanon
Lebanon
Lebanon , officially the Republic of LebanonRepublic of Lebanon is the most common term used by Lebanese government agencies. The term Lebanese Republic, a literal translation of the official Arabic and French names that is not used in today's world. Arabic is the most common language spoken among...
, Bashir remained neutral. After several months of attacks, Napoleon was forced to withdraw and his bid to conquer Egypt and the East failed.

With the help of his chief financial adviser, Haim Farhi
Haim Farhi
Haim Farhi , was an adviser to the governors of the Galilee in the days of the Ottoman Empire. Among the Jews he was known as Hakham Haim, because of his Talmudic learning....
, a Damascus
Damascus
Damascus , commonly known in Syria as Al Sham , and as the City of Jasmine , is the capital and the second largest city of Syria after Aleppo, both are part of the country's 14 governorates. In addition to being one of the oldest continuously inhabited cities in the world, Damascus is a major...
Jew, Jezzar Pasha embarked on a major building program in Acre that included fortifying the city walls, refurbishing the aqueduct that brought spring water from nearby Kabri
Al-Kabri
Al-Kabri was a Palestinian Arab town in the Galilee located northeast of Acre. It was captured by the Israel Defence Forces during the 1948 Arab-Israeli war. In 1945, it had a population of 1,520 and a total land area of 28,729 dunams. It is near the site of Tel Kabri.-History:Al-Kabri was known...
, and building a large Turkish bath. One of the most important landmarks built by Jezzar Pasha was the mosque that bears his name, a massive building in the Turkish style. Built over a Crusader church, the al-Jezzar Mosque incorporates columns brought from Roman
Ancient Rome
Ancient Rome was a thriving civilization that grew on the Italian Peninsula as early as the 8th century BC. Located along the Mediterranean Sea and centered on the city of Rome, it expanded to one of the largest empires in the ancient world....
and Byzantine
Byzantine
Byzantine usually refers to the Roman Empire during the Middle Ages.Byzantine may also refer to:* A citizen of the Byzantine Empire, or native Greek during the Middle Ages...
ruins in Caesarea and Tyre, and included a school for Islamic religious studies, later used as a religious court. Al-Jezzar and his adopted son and successor Suleiman Pasha, were buried in the courtyard.