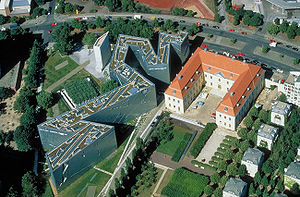 The Jewish Museum Berlin (Jüdisches Museum Berlin), in Berlin
Berlin
Berlin is the capital city of Germany and is one of the 16 states of Germany. With a population of 3.45 million people, Berlin is Germany's largest city. It is the second most populous city proper and the seventh most populous urban area in the European Union...
, Germany
Germany
Germany , officially the Federal Republic of Germany , is a federal parliamentary republic in Europe. The country consists of 16 states while the capital and largest city is Berlin. Germany covers an area of 357,021 km2 and has a largely temperate seasonal climate...
, covers two millennia of German Jewish history. It consists of two buildings. One is the old Kollegienhaus, a former courthouse, built in the 18th century. The other, a new addition specifically built for the museum, designed by world-renowned architect
Architect
An architect is a person trained in the planning, design and oversight of the construction of buildings. To practice architecture means to offer or render services in connection with the design and construction of a building, or group of buildings and the space within the site surrounding the...
Daniel Libeskind
Daniel Libeskind
Daniel Libeskind, is an American architect, artist, and set designer of Polish-Jewish descent. Libeskind founded Studio Daniel Libeskind in 1989 with his wife, Nina, and is its principal design architect...
. This was one of the first buildings in Berlin designed after German reunification
German reunification
German reunification was the process in 1990 in which the German Democratic Republic joined the Federal Republic of Germany , and when Berlin reunited into a single city, as provided by its then Grundgesetz constitution Article 23. The start of this process is commonly referred by Germans as die...
. The museum opened to the public in 2001. 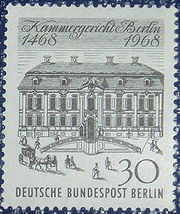 The original Jewish Museum in Berlin was founded on Oranienburger Straße in 1933. The Nazi regime closed it in 1938, and it wasn’t until 1975 that an "Association for a Jewish Museum" formed to resurrect the old museum. After an exhibition on Jewish history opened there in 1978, the Berlin Museum, which chronicled the city’s history, established a Jewish Department. Soon thereafter, discussions for constructing a new museum dedicated to Jewish history in Berlin began.

In 1988, the Berlin government announced an anonymous competition
Architectural design competition
An architectural design competition is a special type of competition in which an organization or government body that plans to build a new building asks for architects to submit a proposed design for a building. The winning design is usually chosen by an independent panel of design professionals...
for the new museum’s design. A year later, Daniel Libeskind's design was chosen for the commission for what was then planned as a “Jewish Department” for the Berlin Museum. While other entrants proposed cool, neutral spaces, Libeskind offered a radical, zigzag design, which earned the nickname 'Blitz'.

On July 3, 1991, the Senate of Berlin
Senate of Berlin
The Senate of Berlin is the executive body governing the city of Berlin, which at the same time is a state of Germany. According to the Constitution of Berlin the Senate consists of the Governing Mayor of Berlin and up to eight Senators appointed by the Governing Mayor, two of whom are appointed ...
voted to scrap the Jewish Museum. Financial pressures from unforeseen unification expenses and a serious bid for Berlin to host a future Olympics prompted the Senate's decision to otherwise reallocate the approximately $50 million. The Libeskinds, however, alerted the international press. Influential political and cultural figures, including Benjamin Netanyahu
Benjamin Netanyahu
Benjamin "Bibi" Netanyahu is the current Prime Minister of Israel. He serves also as the Chairman of the Likud Party, as a Knesset member, as the Health Minister of Israel, as the Pensioner Affairs Minister of Israel and as the Economic Strategy Minister of Israel.Netanyahu is the first and, to...
, Teddy Kollek
Teddy Kollek
Theodor "Teddy" Kollek was mayor of Jerusalem from 1965 to 1993, and founder of the Jerusalem Foundation. Kollek was re-elected five times, in 1969, 1973, 1978, 1983 and 1989...
, Jacques Lang, and Marvin Hier
Marvin Hier
Rabbi Marvin Hier is the dean and founder of the Simon Wiesenthal Center, its Museum of Tolerance and of Moriah, the Center's film division....
, expressed their support for the museum. Due to these pressures, in October 1991, the Parliament of Berlin overruled the Senate and work on the Jewish Museum continued.

Construction on the new extension to the Berlin Museum began in November 1992. The empty museum was completed in 1999 and attracted over 350,000 people before it was filled and opened on September 9, 2001.

The museum adjoins the old Berlin Museum and sits on land that was West Berlin
West Berlin
West Berlin was a political exclave that existed between 1949 and 1990. It comprised the western regions of Berlin, which were bordered by East Berlin and parts of East Germany. West Berlin consisted of the American, British, and French occupation sectors, which had been established in 1945...
before the Berlin Wall
Berlin Wall
The Berlin Wall was a barrier constructed by the German Democratic Republic starting on 13 August 1961, that completely cut off West Berlin from surrounding East Germany and from East Berlin...
fell. The Museum itself, consisting of about 161,000 square feet (15,000 square meters), is a twisted zig-zag and is accessible only via an underground passage from the Berlin Museum's baroque wing. Its shape is reminiscent of a warped Star of David
Star of David
The Star of David, known in Hebrew as the Shield of David or Magen David is a generally recognized symbol of Jewish identity and Judaism.Its shape is that of a hexagram, the compound of two equilateral triangles...
. A "Void," an empty space about 66 feet (20 m) tall, slices linearly through the entire building. Menashe Kadishman
Menashe Kadishman
Menashe Kadishman is an Israeli sculptor and painter.-Biography:From 1947 to 1950, Kadishman studied with the Israeli sculptor Moshe Sternschuss at the Avni Institute of Art and Design in Tel Aviv, and in 1954 with the Israeli sculptor Rudi Lehmann in Jerusalem.In 1959, he moved to London, where...
's Shalechet (Fallen leaves) installation fills the void with 10,000 coarse iron faces. An irregular matrix of windows cuts in all orientations across the building's facade. A thin layer of zinc
Zinc
Zinc , or spelter , is a metallic chemical element; it has the symbol Zn and atomic number 30. It is the first element in group 12 of the periodic table. Zinc is, in some respects, chemically similar to magnesium, because its ion is of similar size and its only common oxidation state is +2...
coats the building's exterior, which will oxidize and turn bluish as it weathers.

The final underground tunnel leads from the Museum to the Holocaust Tower, a 79 foot (24 m) tall empty silo. The bare concrete Tower is neither heated nor cooled, and its only light comes from a small slit in its roof.

In his research for the project, Libeskind read the Gedenkbuch, or Memorial Book, which lists all the Jews murdered in the Holocaust. The report which he filed in the original design competition borrowed the form of the Gedenkbuch.

Libeskind, a musician himself, took inspiration from music and considered the museum the final act of Arnold Schoenberg
Arnold Schoenberg
Arnold Schoenberg was an Austrian composer, associated with the expressionist movement in German poetry and art, and leader of the Second Viennese School...
's unfinished opera, Moses und Aron
Moses und Aron
Moses und Aron is a three-act opera by Arnold Schoenberg with the third act unfinished. The German libretto was by the composer after the Book of Exodus.-Compositional history:...
. Walter Benjamin
Walter Benjamin
Walter Bendix Schönflies Benjamin was a German-Jewish intellectual, who functioned variously as a literary critic, philosopher, sociologist, translator, radio broadcaster and essayist...
's One Way Streets 60 sections determined the number of sections that comprise the museum's zigzag section.