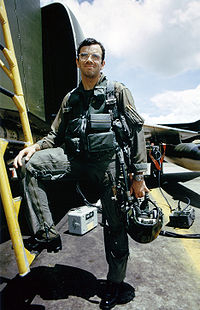 Lieutenant Colonel Jeffrey S. Feinstein was a career officer in the United States Air Force
United States Air Force
The United States Air Force is the aerial warfare service branch of the United States Armed Forces and one of the American uniformed services. Initially part of the United States Army, the USAF was formed as a separate branch of the military on September 18, 1947 under the National Security Act of...
. In 1972 during the Vietnam War
Vietnam War
The Vietnam War was a Cold War-era military conflict that occurred in Vietnam, Laos, and Cambodia from 1 November 1955 to the fall of Saigon on 30 April 1975. This war followed the First Indochina War and was fought between North Vietnam, supported by its communist allies, and the government of...
, while flying as a weapon systems officer (WSO)
Weapon systems officer
A Weapon Systems Officer is an air Flight Officer directly involved in all air operations and weapon systems of the fighter in the United States Navy. A Weapon Systems Officer ("WSO", pronounced "wizzo") is an air Flight Officer directly involved in all air operations and weapon systems of the...
aboard F-4 Phantom II
F-4 Phantom II
The McDonnell Douglas F-4 Phantom II is a tandem two-seat, twin-engined, all-weather, long-range supersonic jet interceptor fighter/fighter-bomber originally developed for the United States Navy by McDonnell Aircraft. It first entered service in 1960 with the U.S. Navy. Proving highly adaptable,...
s, Feinstein downed five enemy aircraft, thereby becoming a flying ace
Flying ace
A flying ace or fighter ace is a military aviator credited with shooting down several enemy aircraft during aerial combat. The actual number of aerial victories required to officially qualify as an "ace" has varied, but is usually considered to be five or more...
, the last ace produced by the USAF.

His nickname/tactical callsign
Aviator call sign
An aviator call sign or callsign is a nickname given to a military pilot or other flight officer. This call sign is a substitute for the officer's given name, and is used on name tags, planes, and radio conversations....
was "Fang." Having originally been designated as an Air Force Navigator, he was given a vision waiver after Vietnam
Vietnam
Vietnam – sometimes spelled Viet Nam , officially the Socialist Republic of Vietnam – is the easternmost country on the Indochina Peninsula in Southeast Asia. It is bordered by China to the north, Laos to the northwest, Cambodia to the southwest, and the South China Sea –...
(Feinstein wore glasses to correct mild nearsightedness to 20/20), sent to Undergraduate Pilot Training and redesignated as an Air Force pilot in the fighter
Fighter pilot
A fighter pilot is a military aviator trained in air-to-air combat while piloting a fighter aircraft . Fighter pilots undergo specialized training in aerial warfare and dogfighting...
community.

Feinstein subsequently served as an F-4 pilot with the 526th Tactical Fighter Squadron
526th Fighter Squadron
The 526th Fighter Squadron is an inactive United States Air Force unit. Its last assignment was with the 86th Operations Group, based at Ramstein Air Base, Germany. It was inactivated on July 1, 1994.-World War II:...
of the 86th Tactical Fighter Wing at Ramstein Air Base
Ramstein Air Base
Ramstein Air Base is a United States Air Force base in the German state of Rheinland-Pfalz. It serves as headquarters for the United States Air Forces in Europe and is also a North Atlantic Treaty Organization installation...
, West Germany in the mid-1970s. From 1977 to 1978, he was assigned to Maxwell AFB, Alabama as a student at the Air Command and Staff College
Air Command and Staff College
The Air Command and Staff College is located at Maxwell Air Force Base in Montgomery, Alabama and is the United States Air Force's intermediate professional military education school. It prepares field grade and equivalent officers of all U.S...
, followed by another flying assignment with the 31st Tactical Training Wing
31st Fighter Wing
The 31st Fighter Wing is a United States Air Force unit assigned to the United States Air Forces in Europe Third Air Force. It is stationed at Aviano Air Base, Italy where it is also the host unit....
at Homestead AFB, Florida. Reassigned to the 9th Air Force staff at Shaw AFB, South Carolina in the 1990s, Feinstein also flew as Airborne Command Element Director aboard E-3 Sentry
E-3 Sentry
The Boeing E-3 Sentry is an airborne warning and control system developed by Boeing as the prime contractor. Derived from the Boeing 707, it provides all-weather surveillance, command, control and communications, and is used by the United States Air Force , NATO, Royal Air Force , French Air Force...
AWACS aircraft during Operations Desert Shield and Desert Storm
Gulf War
The Persian Gulf War , commonly referred to as simply the Gulf War, was a war waged by a U.N.-authorized coalition force from 34 nations led by the United States, against Iraq in response to Iraq's invasion and annexation of Kuwait.The war is also known under other names, such as the First Gulf...
from August 1990 to February 1991.