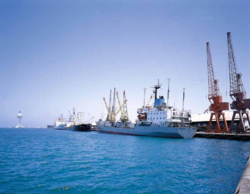 King Saud International Seaport (also called Jeddah Islamic Seaport) has an excellent location in the middle of the international shipping route between east and west.

The Port established in September 1976, whereupon it started developing its facilities. The port has expanded from a modest 10 operational berths in 1976 to the 58 berths of international standard in service today.

Jeddah
Jeddah
Jeddah, Jiddah, Jidda, or Jedda is a city located on the coast of the Red Sea and is the major urban center of western Saudi Arabia. It is the largest city in Makkah Province, the largest sea port on the Red Sea, and the second largest city in Saudi Arabia after the capital city, Riyadh. The...
Islamic Port is a congestion free harbor. It occupies an area of 10.5 square kilometers and its deep water quays provide an overall berthing length of 11.2 kilometers with a maximum draft of 16 metres.

The port can accommodate the latest generation of large container vessels with a capacity of 6500 TEUs.

Along the coastline of the Red Sea runs a parallel stretch of coral reef
Coral reef
Coral reefs are underwater structures made from calcium carbonate secreted by corals. Coral reefs are colonies of tiny living animals found in marine waters that contain few nutrients. Most coral reefs are built from stony corals, which in turn consist of polyps that cluster in groups. The polyps...
s. Jeddah is one of the few places where a gap in the reefs allows large vessels to approach the coastline directly. Nevertheless the reefs have proven fatal to many ships through the ages.

Two Italian Destroyers are reported to have run aground near Jedda in 1941.

From the sixties it is reported that two ships had run aground to the north and to the south of the entrance to the port: thus marking the safe shipping lane between them.

As of 2007 at least three large ships have been reported lying south of Jeddah. At 20°52′02.87"N 39°21′39.77"E lies the "Saudi Golden Arrow", ex-Norwegian
Norway
Norway , officially the Kingdom of Norway, is a Nordic unitary constitutional monarchy whose territory comprises the western portion of the Scandinavian Peninsula, Jan Mayen, and the Arctic archipelago of Svalbard and Bouvet Island. Norway has a total area of and a population of about 4.9 million...
Ferry "M/S Europafergen" reported laid up at Shoieba.

Also since about 2000 the "Al Basmalah I" built as "Glen Sannox" in 1957 and the "Al-Fahad", ex "Free Enterprise III", that anchored after engine problems in 2004 and has since reported to have become semisubmerged.