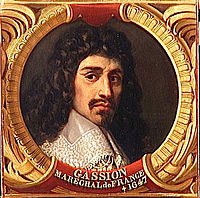 Jean, comte de Gassion was a Gascon
Gascony
Gascony is an area of southwest France that was part of the "Province of Guyenne and Gascony" prior to the French Revolution. The region is vaguely defined and the distinction between Guyenne and Gascony is unclear; sometimes they are considered to overlap, and sometimes Gascony is considered a...
military commander for France
France
The French Republic , The French Republic , The French Republic , (commonly known as France , is a unitary semi-presidential republic in Western Europe with several overseas territories and islands located on other continents and in the Indian, Pacific, and Atlantic oceans. Metropolitan France...
, prominent at the battle of Rocroi
Battle of Rocroi
The Battle of Rocroi was fought on 19 May 1643, late in the Thirty Years' War. It resulted in a victory of the French army under the Duc d'Enghien, against the Spanish army under General Francisco de Melo.-Prelude:...
(1643) who reached the rank of Marshal of France
Marshal of France
The Marshal of France is a military distinction in contemporary France, not a military rank. It is granted to generals for exceptional achievements...
at the age of thirty-four. He served Louis XIII
Louis XIII of France
Louis XIII was a Bourbon monarch who ruled as King of France and of Navarre from 1610 to 1643.Louis was only eight years old when he succeeded his father. His mother, Marie de Medici, acted as regent during Louis' minority...
and Louis XIV
Louis XIV of France
Louis XIV , known as Louis the Great or the Sun King , was a Bourbon monarch who ruled as King of France and Navarre. His reign, from 1643 to his death in 1715, began at the age of four and lasted seventy-two years, three months, and eighteen days...
and died of wounds at the siege of Lens.

Cardinal Richelieu called him la Guerre ("War") and commandeered his services which had proved valuable to Gustavus Adolphus, one of the renovators of new cavalry tactics
Cavalry tactics
For much of history , humans have used some form of cavalry for war. Cavalry tactics have evolved over time...
in the West. It was a stroke of good fortune, for, several days after the death of Louis XIII, under the young duc d'Enghien, Louis II de Bourbon, the Grand Condé, Gassion was a crucial factor in the French success at Rocroi against combined Habsburg
Habsburg
The House of Habsburg , also found as Hapsburg, and also known as House of Austria is one of the most important royal houses of Europe and is best known for being an origin of all of the formally elected Holy Roman Emperors between 1438 and 1740, as well as rulers of the Austrian Empire and...
forces, a role gracefully acknowledged by Condé.