Encyclopedia
The Battle of Rocroi was fought on 19 May 1643, late in the Thirty Years' War
Thirty Years' War
The Thirty Years' War was fought primarily in what is now Germany, and at various points involved most countries in Europe. It was one of the most destructive conflicts in European history....
. It resulted in a victory of the French
France
The French Republic , The French Republic , The French Republic , (commonly known as France , is a unitary semi-presidential republic in Western Europe with several overseas territories and islands located on other continents and in the Indian, Pacific, and Atlantic oceans. Metropolitan France...
army under the Duc d'Enghien
Louis II de Bourbon, Prince de Condé
Louis de Bourbon, Prince of Condé was a French general and the most famous representative of the Condé branch of the House of Bourbon. Prior to his father's death in 1646, he was styled the Duc d'Enghien...
, against the Spanish
Spanish Empire
The Spanish Empire comprised territories and colonies administered directly by Spain in Europe, in America, Africa, Asia and Oceania. It originated during the Age of Exploration and was therefore one of the first global empires. At the time of Habsburgs, Spain reached the peak of its world power....
army under General Francisco de Melo
Francisco de Melo
Don Francisco de Melo was a Portuguese nobleman and general.-Biography:de Melo was born at Estremoz, in Portugal....
.

The Habsburg Spanish army of about 27,000 men, advanced from Flanders, through the Ardennes, and into northern France to relieve French pressure on the Franche-Comté
Franche-Comté
Franche-Comté the former "Free County" of Burgundy, as distinct from the neighbouring Duchy, is an administrative region and a traditional province of eastern France...
and Catalonia
Catalonia
Catalonia is an autonomous community in northeastern Spain, with the official status of a "nationality" of Spain. Catalonia comprises four provinces: Barcelona, Girona, Lleida, and Tarragona. Its capital and largest city is Barcelona. Catalonia covers an area of 32,114 km² and has an...
. The Spanish troops set siege to Rocroi
Rocroi
Rocroi is a commune in the Ardennes department in northern France.The center was a fortified city, the walls of which are in the shape of a stylised star. The Battle of Rocroi was fought here.-Population:-External links:*...
, which lay athwart the route to the valley of the Oise. The French, under the command of 21-year-old Louis, duc d'Enghien, reacted quickly and forced a battle before the arrival of 6,000 Spanish reinforcements. The Spanish failed to block the route to Rocroi, which passed through a defile
Defile (geography)
Defile is a geographic term for a narrow pass or gorge between mountains or hills. It has its origins as a military description of a pass through which troops can march only in a narrow column or with a narrow front...
bordered by woods and marsh. Enghien advanced through the defile and assembled his force along a ridge looking down on the besieged town of Rocroi. The Spanish quickly formed up between the town and the ridge. The French army, some 23,000 strong, was arranged with two lines of infantry in the centre, squadrons of cavalry on each wing and with a thin line of artillery at the front. The Spanish army was similarly arranged, but with its infantry in their traditional tercio
Tercio
The tercio was a Renaissance era military formation made up of a mixed infantry formation of about 3,000 pikemen, swordsmen and arquebusiers or musketeers in a mutually supportive formation. It was also sometimes referred to as the Spanish Square...
s, or squares. The two armies bivouacked in their positions for the night.

The battle began after dawn. The French army attacked, but the French infantry in the centre were bested by the Spanish. The cavalry on the French left, advancing against Enghien's orders, was also thrown back. But the cavalry on the French right, under the command of Jean de Gassion
Jean de Gassion
Jean, comte de Gassion was a Gascon military commander for France, prominent at the battle of Rocroi who reached the rank of Marshal of France at the age of thirty-four...
, routed the Spanish cavalry opposite. Enghien was able to follow this up by attacking the exposed left flank of the Spanish infantry. Spanish cavalry made a successful counter-attack to drive off the French cavalry, but were checked by the advance of the French reserve.

Enghien now carried out a huge cavalry encirclement, sweeping behind the Spanish army and smashing his way through to attack the rear of the Spanish cavalry that was still in combat with his reserves. The Spanish horse was put to flight, leaving the Spanish infantry to carry on the fight. The French were twice repulsed by the stubborn Spanish squares, so Enghien arranged for his artillery and captured Spanish guns to blast them apart.

The German and Walloon tercios fled from the battlefield, while the Spanish remained on the field with their commander, repulsing four cavalry charges by the French and never breaking formation, despite repeated heavy artillery bombardment. Young Enghien, the French commander, then offered surrender conditions just like those obtained by a besieged garrison into a fortress. Having agreed to those terms, the remains of the two tercios left the field with deployed flags and weapons. 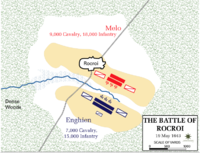 The battle was an important propaganda victory for Mazarin and Enghien, the future "Great Condé" and represented a weakening of the besieged Spanish Low Countries. It was also of symbolic importance, as it was one of the few major battlefield defeats of a Spanish army in over a century and, moreover, a defeat of one its most famous units. It has been noted that Melo's German
Germany
Germany , officially the Federal Republic of Germany , is a federal parliamentary republic in Europe. The country consists of 16 states while the capital and largest city is Berlin. Germany covers an area of 357,021 km2 and has a largely temperate seasonal climate...
, Walloon
Walloons
Walloons are a French-speaking people who live in Belgium, principally in Wallonia. Walloons are a distinctive community within Belgium, important historical and anthropological criteria bind Walloons to the French people. More generally, the term also refers to the inhabitants of the Walloon...
, and Italian
Italy
Italy , officially the Italian Republic languages]] under the European Charter for Regional or Minority Languages. In each of these, Italy's official name is as follows:;;;;;;;;), is a unitary parliamentary republic in South-Central Europe. To the north it borders France, Switzerland, Austria and...
troops actually surrendered first, while the Spanish infantry cracked only after repeated cavalry charges and a vicious spell under the French guns. In any case, though Rocroi was far from being the total military disaster claimed by French propagandists (the Spanish continued to win battles), it did mark the end of Spanish military doctrinal supremacy.

A 2006 Spanish movie, Alatriste
Alatriste
Alatriste is a 2006 Spanish historical film directed by Agustín Díaz Yanes, based on the main character of a series of novels written by Arturo Pérez-Reverte, The Adventures of Captain Alatriste ....
, directed by Agustín Díaz Yanes
Agustín Díaz Yanes
Agustín Díaz Yanes is a Spanish Goya Awards winner screenwriter and film director.- Screenwriter :* Al límite * Belmonte * Demasiado corazón * A solas contigo * Baton Rouge * Barrios altos...
, portrays this battle in its final scene. The soundtrack features in this scene a funeral march, La Madrugá, composed by Colonel Abel Moreno for the Holy Week of Seville, played by the band of the regiment Soria 9, heir of that which participated in the battle, the oldest unit in the Spanish Army
Spanish Army
The Spanish Army is the terrestrial army of the Spanish Armed Forces responsible for land-based military operations. It is one of the oldest active armies - dating back to the 15th century.-Introduction:...
, and since nicknamed "the bloody Tercio".

The sedan chair belonging to the Spanish infantry general Fuentes was taken as a trophy by the French and may be seen in Les Invalides
Les Invalides
Les Invalides , officially known as L'Hôtel national des Invalides , is a complex of buildings in the 7th arrondissement of Paris, France, containing museums and monuments, all relating to the military history of France, as well as a hospital and a retirement home for war veterans, the building's...
museum in Paris. Fuentes was killed in the battle.
The source of this article is wikipedia, the free encyclopedia.  The text of this article is licensed under the GFDL.