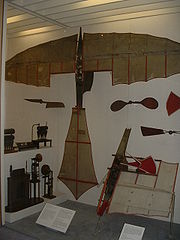 John Stringfellow was born in Sheffield
Sheffield
Sheffield is a city and metropolitan borough of South Yorkshire, England. Its name derives from the River Sheaf, which runs through the city. Historically a part of the West Riding of Yorkshire, and with some of its southern suburbs annexed from Derbyshire, the city has grown from its largely...
, England
England
England is a country that is part of the United Kingdom. It shares land borders with Scotland to the north and Wales to the west; the Irish Sea is to the north west, the Celtic Sea to the south west, with the North Sea to the east and the English Channel to the south separating it from continental...
and is known for his work on the Aerial Steam Carriage
Aerial Steam Carriage
The Aerial Steam Carriage, also named Ariel, was a flying machine patented in 1842 that was supposed to carry passengers into the air. It was, in practice, incapable of flight since it had insufficient power from its heavy steam engine to fly. A more successful model was built in 1848 which was...
with William Samuel Henson
William Samuel Henson
William Samuel Henson was a pre-Wright brothers aviation engineer and inventor.Henson was born on 3 May 1812 , in Nottingham, England. Henson was involved in lace-making in Chard, which increasingly was mechanized at that time, and he obtained a patent on improved lace-making machines in 1835...
.

A bronze model of that first primitive aircraft stands in Fore Street
Fore Street, Chard
Fore Street in Chard, Somerset, England was built in the late 16th and early 17th century, following a fire which destroyed much of the town in 1577. Numbers 7A,7B,9,11,13 & 13A Waterloo House and Manor Court House have been designated as Grade I listed buildings....
in Chard. The town's museum
Chard Museum
Chard Museum is a small local museum in Chard, Somerset, England. It opened in 1970, in a converted 16th century listed building, with collections of exhibits about local history and displays related to the lives of notable local residents.-History:...
has a unique exhibition of flight before the advent of the internal combustion engine and before the manned powered flight made famous by the Wright Brothers
Wright brothers
The Wright brothers, Orville and Wilbur , were two Americans credited with inventing and building the world's first successful airplane and making the first controlled, powered and sustained heavier-than-air human flight, on December 17, 1903...
. Stringfellow also invented and patented compact electric batteries, which were used in early medical treatment. Stringfellow's work was featured in an exhibition in 1868 at The Crystal Palace
The Crystal Palace
The Crystal Palace was a cast-iron and glass building originally erected in Hyde Park, London, England, to house the Great Exhibition of 1851. More than 14,000 exhibitors from around the world gathered in the Palace's of exhibition space to display examples of the latest technology developed in...
in London
London
London is the capital city of :England and the :United Kingdom, the largest metropolitan area in the United Kingdom, and the largest urban zone in the European Union by most measures. Located on the River Thames, London has been a major settlement for two millennia, its history going back to its...
.