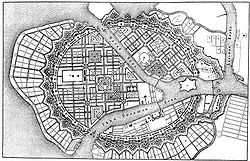 one of our Architects, who among us most knew how to profit from the precepts of the great Master
André Le Nôtre
André Le Nôtre was a French landscape architect and the principal gardener of King Louis XIV of France...
... It must be agreed, however, that, in imitating them, it would be suitable to be provided with a certain intelligence

Named architecte du Roi, he made a set of presentation drawings, dated 1699, for the famous cascade and basin with its jet d'eau at royal Saint-Cloud
Saint-Cloud
Saint-Cloud is a commune in the western suburbs of Paris, France. It is located from the centre of Paris.Like other communes of the Hauts-de-Seine such as Marnes-la-Coquette, Neuilly-sur-Seine or Vaucresson, Saint-Cloud is one of the wealthiest cities in France, ranked 22nd out of the 36500 in...
constructed several hôtels particuliers in Paris, notably the hôtel de Clermont, rue de Varenne, and the hôtel de Vendôme, rue d'Enfer (today boulevard Saint-Michel).

As theoretician and illustrator of architecture, Le Blond produced the second (1710) and third (1720) editions of the Cours d'architecture de Vignole translated with commentary by Charles-Augustin d'Aviler, which Le Blond illustrated with his own drawings. These works introduced the distinctions between state apartments (appartements de parade) and private apartments (appartements de commodités) that would characterize French eighteenth-century planning, and he popularized the small chimneypieces that would take the place of the large ones in the Italian mode, popular in the previous century. He also provided illustrations for L’Histoire de l'abbaye de Saint-Denis (1706) by Michel Félibien. 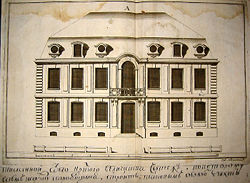 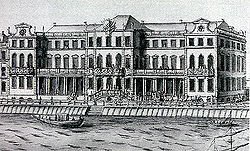 Le Blond did much in a short time to extend the Le Nôtre style beyond France. His cascade at Saint-Cloud may have convinced Peter the Great: in March 1716, Le Blond accepted the tsar's invitation to work at Saint Petersburg
Saint Petersburg
Saint Petersburg is a city and a federal subject of Russia located on the Neva River at the head of the Gulf of Finland on the Baltic Sea...
, where he arrived in August. An unprecedented title of "Architect-General" was bestowed upon him, together with a pension of some 5,000 roubles. His position was superior to that of all other architects and builders working in St. Petersburg.

Within a short span of his stay there, Le Blond established the first nurseries along the banks of the Neva and about twenty workshops, specializing in carving, sculpture, stucco work, tapestries, and so forth. He also succeeded in introducing a program of illuminating the main streets with oil lanterns, designed by himself. The architect died suddenly of smallpox
Smallpox
Smallpox was an infectious disease unique to humans, caused by either of two virus variants, Variola major and Variola minor. The disease is also known by the Latin names Variola or Variola vera, which is a derivative of the Latin varius, meaning "spotted", or varus, meaning "pimple"...
in 1719. The tsar himself was present at the funeral, but Le Blond's grave at the St. Sampson cemetery has not survived.

Among his Russian projects, probably the best known is an idealistic plan which envisioned Vasilievsky Island
Vasilievsky Island
Vasilyevsky Island is an island in Saint Petersburg, Russia, bordered by the rivers Bolshaya Neva and Malaya Neva in the south and northeast, and by the Gulf of Finland in the west. Vasilyevsky Island is separated from Dekabristov Island by the Smolenka River...
as the focus of the new city. Le Blond's plan would have "enclosed the entire city within a perfectly elliptical wall of fortifications", with a network of streets at right angles and squares like the royal squares of France, but the project was not approved. Nor were his projects for the parterre
Parterre
A parterre is a formal garden construction on a level surface consisting of planting beds, edged in stone or tightly clipped hedging, and gravel paths arranged to form a pleasing, usually symmetrical pattern. Parterres need not have any flowers at all...
s of the Summer Garden
Summer Garden
The Summer Garden occupies an island between the Fontanka, Moika, and the Swan Canal in Saint Petersburg and shares its name with the adjacent Summer Palace of Peter the Great.-Original:...
and a residence for the tsar at Strelna
Strelna
Strelna is a municipal settlement in Petrodvortsovy District of the federal city of St. Petersburg, Russia, situated about halfway between St. Petersburg proper and Petergof and overlooking the shore of the Gulf of Finland...
(1717). Three centuries passed before Le Blond's design for a formal garden at Strelna was eventually implemented during the reconstruction of the Constantine Palace in 2003.

Le Blond's main building work in St. Petersburg was a palace of Count Apraksin. Although foreign visitors admitted that "even a king would have been jealous of such a noble dwelling," the palace was eventually demolished to make room for the Winter Palace
Winter Palace
The Winter Palace in Saint Petersburg, Russia, was, from 1732 to 1917, the official residence of the Russian monarchs. Situated between the Palace Embankment and the Palace Square, adjacent to the site of Peter the Great's original Winter Palace, the present and fourth Winter Palace was built and...
, which now occupies the site. Working with Friedrich Braunstein and Niccolo Michetti, the French architect also made many structural changes to the first palace and cascades of Peterhof (1717) for which none of his drawings survive, but which are known through copies made by J.E. Randahl, 1739.