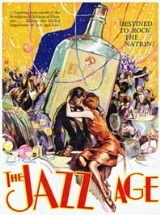 Encyclopedia
The Jazz Age was a movement that took place during the 1920s or the Roaring Twenties
Roaring Twenties
The Roaring Twenties is a phrase used to describe the 1920s, principally in North America, but also in London, Berlin and Paris for a period of sustained economic prosperity. The phrase was meant to emphasize the period's social, artistic, and cultural dynamism...
from which jazz music and dance emerged. The movement came about with the introduction of mainstream radio and the end of the war. This era ended in the 1930s with the beginning of The Great Depression but has lived on in American pop culture for decades. With the introduction of jazz came an entirely new cultural movement in places like the United States, France and England. The birth of jazz music is often accredited to African Americans but expanded and modified to become socially acceptable to middle-class white Americans. White performers were used as a vehicle for the popularization of jazz music in America. Even though the jazz movement was taken over by the middle class white population, it facilitated the mesh of African American traditions and ideals with the white middle class society. Cities like New York
New York City
New York is the most populous city in the United States and the center of the New York Metropolitan Area, one of the most populous metropolitan areas in the world. New York exerts a significant impact upon global commerce, finance, media, art, fashion, research, technology, education, and...
and Chicago
Chicago
Chicago is the largest city in the US state of Illinois. With nearly 2.7 million residents, it is the most populous city in the Midwestern United States and the third most populous in the US, after New York City and Los Angeles...
were cultural centers for jazz, and especially for African American artists. In urban areas, African American jazz was played on the radio more often than in the suburbs. 1920s youth used the influence of jazz to rebel against the traditional culture of previous generations. This youth rebellion of the 1920s went hand-in-hand with fads like bold fashion statements (flappers) and new radio concerts. As jazz flourished, American elites who preferred classical music sought to expand the listenership of their favored genre, hoping that jazz wouldn't become mainstream.

As the 1920s wore on, jazz, despite competition from classical music, rose in popularity and helped to generate a cultural shift. Dances like the Charleston
Charleston (dance)
The Charleston is a dance named for the harbor city of Charleston, South Carolina. The rhythm was popularized in mainstream dance music in the United States by a 1923 tune called "The Charleston" by composer/pianist James P. Johnson which originated in the Broadway show Runnin' Wild and became one...
, developed by African Americans, suddenly became popular among younger demographics. With the beginning of large-scale radio broadcasts in 1922, Americans were able to experience different styles of music without physically visiting a jazz club. The radio provided Americans with a trendy new avenue for exploring the world through broadcasts and concerts from the comfort of their living room. The most popular type of radio show was a "potter palm": amateur concerts and big-band jazz performances broadcasted from cities like New York and Chicago. Jazz artists like Louis Armstrong
Louis Armstrong
Louis Armstrong , nicknamed Satchmo or Pops, was an American jazz trumpeter and singer from New Orleans, Louisiana....
originally received very little airtime because most stations preferred to play the music of white American jazz singers. Big-band jazz, like that of James Reese Europe
James Reese Europe
James Reese Europe was an American ragtime and early jazz bandleader, arranger, and composer. He was the leading figure on the African American music scene of New York City in the 1910s.-Biography:...
and Fletcher Henderson
Fletcher Henderson
James Fletcher Hamilton Henderson, Jr. was an American pianist, bandleader, arranger and composer, important in the development of big band jazz and swing music. His was one of the most prolific black orchestras and his influence was vast...
in New York, was also popular on the radio. This style represented African Americans in the cultural scene predominately controlled by white Americans.


Women in the Jazz Age

With the women’s suffrage at its peak in the 1920s and the entrance of the flapper
Flapper
Flapper in the 1920s was a term applied to a "new breed" of young Western women who wore short skirts, bobbed their hair, listened to jazz, and flaunted their disdain for what was then considered acceptable behavior...
women began to make a statement within society and the Jazz Age was not immune to these new ideals. With women now taking part in the work force after the end of the First World War there were many more possibilities for women in terms of social life and entertainment. Ideas like equality and free sexuality were very popular during the time and women seemed to capitalize during this period. The 1920s saw the emergence of many famous women musicians including Bessie Smith
Bessie Smith
Bessie Smith was an American blues singer.Sometimes referred to as The Empress of the Blues, Smith was the most popular female blues singer of the 1920s and 1930s...
. Bessie Smith also gained attention because she was not only a great singer but also an African American woman. She has grown through the ages to be one of the most well respected singers of all time. Singers such as Billie Holiday
Billie Holiday
Billie Holiday was an American jazz singer and songwriter. Nicknamed "Lady Day" by her friend and musical partner Lester Young, Holiday had a seminal influence on jazz and pop singing...
all the way to Janis Joplin
Janis Joplin
Janis Lyn Joplin was an American singer, songwriter, painter, dancer and music arranger. She rose to prominence in the late 1960s as the lead singer of Big Brother and the Holding Company and later as a solo artist with her backing groups, The Kozmic Blues Band and The Full Tilt Boogie Band...
are said to have been inspired by Bessie Smith.
Another exception to the common stereotype of women at this time was piano player Lil Hardin Armstrong
Lil Hardin Armstrong
Lil Hardin Armstrong was a jazz pianist, composer, arranger, singer, and bandleader, and the second wife of Louis Armstrong with whom she collaborated on many recordings in the 1920s....
. She was given the piano part in her husband's big band radio performance series called Hot Five and then his next series called the Hot Seven  It was not until the 1930s and 1940s that many women jazz singers, such as Bessie Smith and Billie Holiday were recognized as successful artists in the music world. Women such as pianist Billy Tipton
Billy Tipton
Billy Lee Tipton was an American jazz musician and bandleader. Born Dorothy Tipton, he also notable for the discovery, after his death, that he was female assigned at birth.- Early life :...
dressed up like a man to gain acceptance into society as an artist. These women were persistent in striving to make their names known in the music industry and lead the way for many more women artists to come.