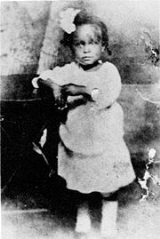 Overview
Billie Holiday was an American jazz
Jazz
Jazz is a musical style that originated at the beginning of the 20th century in African American communities in the Southern United States. It was born out of a mix of African and European music traditions. From its early development until the present, jazz has incorporated music from 19th and 20th...
singer and songwriter. Nicknamed "Lady Day" by her friend and musical partner Lester Young
Lester Young
Lester Willis Young , nicknamed "Prez", was an American jazz tenor saxophonist and clarinetist. He also played trumpet, violin, and drums....
, Holiday had a seminal influence on jazz and pop singing. Her vocal style, strongly inspired by jazz instrumentalists, pioneered a new way of manipulating phrasing and tempo.

Critic John Bush wrote that Holiday "changed the art of American pop vocals forever." She co-wrote only a few songs, but several of them have become jazz standard
Jazz standard
Jazz standards are musical compositions which are an important part of the musical repertoire of jazz musicians, in that they are widely known, performed, and recorded by jazz musicians, and widely known by listeners. There is no definitive list of jazz standards, and the list of songs deemed to be...
s, notably "God Bless the Child
God Bless the Child (Billie Holiday song)
"God Bless the Child" is a song written by Billie Holiday and Arthur Herzog, Jr. in 1939, first recorded on May 9, 1941 under the Okeh label.Holiday's version of the song was honored with the Grammy Hall of Fame Award in...
", "Don't Explain
Don't Explain (song)
"Don't Explain" is a song written by jazz singer Billie Holiday and Arthur Herzog Jr.-Overview:It is said Billie wrote "Don't Explain" after her husband, Jimmy Monroe, came home one night with lipstick traces on his collar.-Recording Session:...
", "Fine and Mellow
Fine and Mellow (song)
"Fine and Mellow" is a jazz standard written by Billie Holiday, who first recorded it on April 20, 1939 on the Commodore label. It is a blues lamenting the bad treatment of a woman at the hands of "my man".- Notable performances and recordings :...
", and "Lady Sings the Blues
Lady Sings the Blues (song)
"Lady Sings the Blues" is a song written by jazz singer Billie Holiday, and jazz pianist Herbie Nichols.It is the title song to her 1956 album, released on Clef/Verve Records ....
".

Did Ms. Holiday have a friend in Austin Texas named Mrs. E. Banks. Mrs. Banks appears to have been a music teacher. Some say she was a best friend.
More

You're My Thrill
More

I ain't good looking And my hair ain't curls But my mother she give me something It's going to carry me through this world.

Some men like me talkin' happy Some calls it snappy Some call me honey Others think I got money Some tell me baby you're built for speed Now if you put that all together Makes me everything a good man needs. :Song co-authored with Arthur Herzog Jr.

Money, you've got lots of friends Crowding round the door When you're gone, spending ends They don't come no more Rich relations give Crust of bread and such You can help yourself But don't take too much. :Holiday's autobiography; co-authored with William Dufty|William Dufty

No two people on earth are alike, and it's got to be that way in music or it isn't music.

I can’t stand to sing the same song the same way two nights in succession, let alone two years or ten years. If you can, then it ain’t music, it’s close-order drill or exercise or yodeling or something, not music.