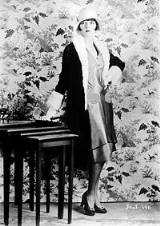 Overview
Flapper in the 1920s was a term applied to a "new breed" of young Western
Western world
The Western world, also known as the West and the Occident , is a term referring to the countries of Western Europe , the countries of the Americas, as well all countries of Northern and Central Europe, Australia and New Zealand...
women who wore short skirts, bobbed
Bob cut
A "bob cut" is a short haircut for women in which the hair is typically cut straight around the head at about jaw-level, often with a fringe at the front.-The beginning:...
their hair, listened to jazz, and flaunted their disdain for what was then considered acceptable behavior. Flappers were seen as brash for wearing excessive makeup, drinking
Distilled beverage
A distilled beverage, liquor, or spirit is an alcoholic beverage containing ethanol that is produced by distilling ethanol produced by means of fermenting grain, fruit, or vegetables...
, treating sex in a casual manner
Casual sex
Casual sex or hooking up refers to certain types of human sexual activity outside the context of a romantic relationship. The term is not always used consistently: some use it to refer to any extramarital sex, some use it to refer to sex in a casual relationship, whereas others reserve its use for...
, smoking
Smoking
Smoking is a practice in which a substance, most commonly tobacco or cannabis, is burned and the smoke is tasted or inhaled. This is primarily practised as a route of administration for recreational drug use, as combustion releases the active substances in drugs such as nicotine and makes them...
, driving automobile
Automobile
An automobile, autocar, motor car or car is a wheeled motor vehicle used for transporting passengers, which also carries its own engine or motor...
s and otherwise flouting social and sexual norms.

Flappers had their origins in the period of Liberalism
Liberalism
Liberalism is the belief in the importance of liberty and equal rights. Liberals espouse a wide array of views depending on their understanding of these principles, but generally, liberals support ideas such as constitutionalism, liberal democracy, free and fair elections, human rights,...
, social and political turbulence and increased transatlantic cultural exchange that followed the end of World War I
World War I
World War I , which was predominantly called the World War or the Great War from its occurrence until 1939, and the First World War or World War I thereafter, was a major war centred in Europe that began on 28 July 1914 and lasted until 11 November 1918...
, as well as the export of American
United States
The United States of America is a federal constitutional republic comprising fifty states and a federal district...
jazz culture to Europe
Europe
Europe is, by convention, one of the world's seven continents. Comprising the westernmost peninsula of Eurasia, Europe is generally 'divided' from Asia to its east by the watershed divides of the Ural and Caucasus Mountains, the Ural River, the Caspian and Black Seas, and the waterways connecting...
.
The slang word flapper, describing a young woman, is sometimes supposed to refer to a young bird flapping its wings while learning to fly.