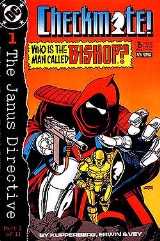 Encyclopedia
"The Janus Directive" was an eleven-part comic book
Comic book
A comic book or comicbook is a magazine made up of comics, narrative artwork in the form of separate panels that represent individual scenes, often accompanied by dialog as well as including...
crossover
Fictional crossover
A fictional crossover is the placement of two or more otherwise discrete fictional characters, settings, or universes into the context of a single story. They can arise from legal agreements between the relevant copyright holders, or because of unauthorized efforts by fans, or even amid common...
first published by DC Comics
DC Comics
DC Comics, Inc. is one of the largest and most successful companies operating in the market for American comic books and related media. It is the publishing unit of DC Entertainment a company of Warner Bros. Entertainment, which itself is owned by Time Warner...
between May and June of 1989
1989 in comics
-Year overall:* "Inferno" company-wide Marvel Comics crossover continues, involving the mutant titles The Uncanny X-Men, X-Factor, The New Mutants, and Excalibur, as well as the X-Terminators limited series and various other Marvel titles...
. Among the creators who contributed to the storyline were writers John Ostrander
John Ostrander
John Ostrander is an American writer of comic books. He is best known for his work on Suicide Squad, Grimjack and Star Wars: Legacy, series he helped create.-Career:...
, Kim Yale
Kim Yale
Kim Yale was an American writer and editor of comic books for multiple comic book companies, including Marvel Comics, DC Comics, First Comics and Warp Graphics....
, Paul Kupperberg
Paul Kupperberg
Paul Kupperberg is a former editor for DC Comics, and a prolific writer of comic books and newspaper strips.-Biography:Kupperberg entered the comics field from comics fandom, as had his brother, writer/artist Alan Kupperberg...
, Cary Bates
Cary Bates
Cary Bates is an American comic book, animation television and film writer.-Biography:Bates began submitting ideas for comic book covers to DC Comics at the age of 13, and a number of them were bought and published, the first as the cover to Superman #167...
and Greg Weisman
Greg Weisman
Greg Weisman is an American comic book and animation writer and producer, best known as the creator of Gargoyles and as the Supervising Producer of The Spectacular Spider-Man. Weisman is currently a producer on the Young Justice animated series...
and artists John K. Snyder III, Rick Hoberg, Rafael Kayanan, Tom Mandrake and Pat Broderick
Pat Broderick
Pat Broderick is an American comic book artist known for his work on the Micronauts. Broderick also pencilled the four-part Batman: Year Three storyline, written by Marv Wolfman, which detailed the first meeting of Batman and Tim Drake.-Early career :Fresh from high school in Tampa, Florida,...
.

The storyline did not have its own series, but ran through several titles - mainly Checkmate!
Checkmate (comics)
Checkmate, a division of Task Force X, is a fictional covert operations agency within the DC Comics universe. It first appeared in Action Comics #598 and proceeded to have its own ongoing title in Checkmate!...
(vol. 1) and Suicide Squad
Suicide Squad
The Suicide Squad, also known as Task Force X , is a name for two fictional organizations in the DC Comics Universe. The first version debuted in The Brave and the Bold #25 , and the second in Legends #3...
(vol. 1), though Manhunter
Manhunter (comics)
-Golden Age:The first of DC's Manhunters was a non-costumed independent investigator, Paul Kirk, who helped police solve crimes during the early 1940s. Though the series was titled "Paul Kirk, Manhunter", Kirk didn't use the Manhunter name as an alias...
(vol. 1), Firestorm
Firestorm (comics)
Firestorm is the name of several comic book superheroes published by DC Comics. Ronnie Raymond and Martin Stein, the first Firestorm, debuted in Firestorm, the Nuclear Man #1 , and was created by Gerry Conway and Al Milgrom. Martin Stein, by himself as Firestorm, debuted in Firestorm the Nuclear...
(vol. 2), and Captain Atom
Captain Atom
Captain Atom is a fictional comic book superhero that has existed in three basic incarnations. Created by writer Joe Gill and artist/co-writer Steve Ditko, he first appeared in Space Adventures #33 . Captain Atom was created for Charlton Comics but was later acquired by DC Comics and revised for...
(vol. 5), all had individual issues which were involved in the crossover. Checkmate! and Suicide Squad were published biweekly for the duration of the event.

The storyline focused on the covert operations super-teams and organizations that existed in the DC Universe
DC Universe
The DC Universe is the shared universe where most of the comic stories published by DC Comics take place. The fictional characters Superman, Batman and Wonder Woman are well-known superheroes from this universe. Note that in context, "DC Universe" is usually used to refer to the main DC continuity...
at the time.

Suicide Squad leader Amanda Waller
Amanda Waller
Dr. Amanda Blake Waller is a character published by DC Comics. She first appeared in Legends #1 in 1986, and was created by John Ostrander, Len Wein, and John Byrne...
began to send her agents on missions in the apparent pursuit of her own private agenda, the so-called Janus Directive, one that brought the Squad into conflict with other metahuman villains and government agencies. So, an all-out mayhem broke loose among these groups, involving various metahumans associated with the United States military and civilian agencies.

Eventually, it came out that Waller had not gone rogue, but had been nearly assassinated by the cult leader Kobra
Kobra (comics)
Kobra is the name used by two fictional supervillains published by DC Comics. The Jeffrey Burr Kobra first appeared in Kobra #1 , and was created by Martin Pasko, Steve Sherman, Jack Kirby, and Pablo Marcos...
. Kobra had tried to murder Waller and replace her with a subservient doppelgänger
Doppelgänger
In fiction and folklore, a doppelgänger is a paranormal double of a living person, typically representing evil or misfortune...
in order to then manipulate and mislead the various government agencies to keep them from stopping his own plan: to activate a massive space-based microwave pulse cannon that would fry all electronic systems (not to mention human nervous systems) in the eastern United States, unleashing the Kali Yuga
Kali Yuga
Kali Yuga is the last of the four stages that the world goes through as part of the cycle of yugas described in the Indian scriptures. The other ages are Satya Yuga, Treta Yuga and Dvapara Yuga...
, the age of chaos he thought it was his destiny to commence. Waller had gotten the drop on her double and murdered it instead, but decided to play the role of the double in order to ferret out the true mastermind behind the Janus Directive. Eventually, the truth was revealed, and the groups united and stormed Kobra's space ark, capturing him and destroying his weapon.

The fallout of the Janus Directive saw a very irate President Bush reorganize the various agencies to bring them more tightly under executive control; he dissolved Task Force X, the umbrella organization under which both Checkmate and the Squad operated and the component agencies becoming autonomous, and made Sarge Steel
Sarge Steel
Sarge Steel is a detective/spy character published by Charlton Comics during the 1960s. As he was published during the time of Charlton's Action Heroes line of superheroes, and had loose ties to some, he is sometimes included with that group...
a Cabinet
United States Cabinet
The Cabinet of the United States is composed of the most senior appointed officers of the executive branch of the federal government of the United States, which are generally the heads of the federal executive departments...
-level official with overall control of all governmental metahuman activity on the civilian side. General Wade Eiling
General Wade Eiling
General Wade Eiling, sometimes known as The General, is a fictional character published by DC Comics. He first appeared in Captain Atom #1 , and was created by Cary Bates and Pat Broderick.-Captain Atom:...
was made his equivalent in the Department of Defense
United States Department of Defense
The United States Department of Defense is the U.S...
. Waller was put on probation by Bush because of her "lone wolf" tactics, much to her displeasure.

Waller would soon thereafter be imprisoned for taking matters into her own hands one time too many, after she led an assassination team to personally liquidate the Vodou-oriented drug ring called the Loa
Loa
The Loa are the spirits of the voodoo religion practiced in Louisiana, Haiti, Benin, and other parts of the world. They are also referred to as Mystères and the Invisibles, in which are intermediaries between Bondye —the Creator, who is distant from the world—and humanity...
. This led to the shut-down of all Suicide Squad operations for one year.

While individual operatives like Firestorm
Firestorm (comics)
Firestorm is the name of several comic book superheroes published by DC Comics. Ronnie Raymond and Martin Stein, the first Firestorm, debuted in Firestorm, the Nuclear Man #1 , and was created by Gerry Conway and Al Milgrom. Martin Stein, by himself as Firestorm, debuted in Firestorm the Nuclear...
(Ronald Raymond), Firehawk and Manhunter
Manhunter (comics)
-Golden Age:The first of DC's Manhunters was a non-costumed independent investigator, Paul Kirk, who helped police solve crimes during the early 1940s. Though the series was titled "Paul Kirk, Manhunter", Kirk didn't use the Manhunter name as an alias...
(Mark Shaw) did play a part in the storyline's resolution, they were nowhere as important as the characters in this chart.