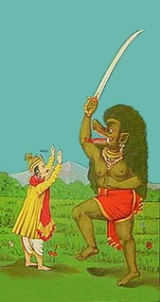 Overview
Kali Yuga also called Nagari , is an abugida alphabet of India and Nepal...
: kəli juɡə, lit. "age of (the male demon) Kali
Kali (Demon)
In Hinduism, Kali is the reigning lord of Kali Yuga and archenemy of Kalki, the 10th and final Avatar of the Hindu god Vishnu...
", or "age of vice") is the last of the four stages that the world goes through as part of the cycle of yugas described in the Indian scriptures. The other ages are Satya Yuga
Satya Yuga
The Satya Yuga , also called Sat Yuga, Krta Yuga and Krita Yuga in Hinduism, is the "Yuga of Truth", when mankind is governed by gods, and every manifestation or work is close to the purest ideal and mankind will allow intrinsic goodness to rule supreme...
, Treta Yuga
Treta Yuga
Treta Yuga is the second out of four yugas, or ages of mankind, in the religion of Hinduism, and follows the Satya Yuga of perfect morality and precedes the Dvapara Yuga. The most famous events in this yuga were Lord Vishnu's fifth, sixth and seventh incarnations as Vamana, Parashurama and...
and Dvapara Yuga
Dvapara Yuga
Dvapara Yuga or Dwapara Yuga is the third out of four yugas, or ages, described in the scriptures of Hinduism. This yuga comes after Treta Yuga and is followed by Kali Yuga...
. The duration and chronological starting point in human history of Kali Yuga has given rise to different evaluations and interpretations.