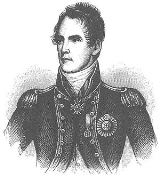 Encyclopedia
Sir James Lucas Yeo KCB (7 October 1782 – 21 August 1818) was a British
United Kingdom
The United Kingdom of Great Britain and Northern IrelandIn the United Kingdom and Dependencies, other languages have been officially recognised as legitimate autochthonous languages under the European Charter for Regional or Minority Languages...
naval commander who served in the War of 1812
War of 1812
The War of 1812 was a military conflict fought between the forces of the United States of America and those of the British Empire. The Americans declared war in 1812 for several reasons, including trade restrictions because of Britain's ongoing war with France, impressment of American merchant...
.

Yeo was born in Southampton
Southampton
Southampton is the largest city in the county of Hampshire on the south coast of England, and is situated south-west of London and north-west of Portsmouth. Southampton is a major port and the closest city to the New Forest...
on 7 October 1782, and joined the Royal Navy
Royal Navy
The Royal Navy is the naval warfare service branch of the British Armed Forces. Founded in the 16th century, it is the oldest service branch and is known as the Senior Service...
as a midshipman
Midshipman
A midshipman is an officer cadet, or a commissioned officer of the lowest rank, in the Royal Navy, United States Navy, and many Commonwealth navies. Commonwealth countries which use the rank include Australia, New Zealand, South Africa, India, Pakistan, Singapore, Sri Lanka and Kenya...
at the age of 10. He first saw action as a lieutenant
Lieutenant
A lieutenant is a junior commissioned officer in many nations' armed forces. Typically, the rank of lieutenant in naval usage, while still a junior officer rank, is senior to the army rank...
aboard a brig
Brig
A brig is a sailing vessel with two square-rigged masts. During the Age of Sail, brigs were seen as fast and manoeuvrable and were used as both naval warships and merchant vessels. They were especially popular in the 18th and early 19th centuries...
in the Adriatic Sea
Adriatic Sea
The Adriatic Sea is a body of water separating the Italian Peninsula from the Balkan peninsula, and the system of the Apennine Mountains from that of the Dinaric Alps and adjacent ranges...
, and distinguished himself during the siege
Siege
A siege is a military blockade of a city or fortress with the intent of conquering by attrition or assault. The term derives from sedere, Latin for "to sit". Generally speaking, siege warfare is a form of constant, low intensity conflict characterized by one party holding a strong, static...
of Cesenatico
Cesenatico
Cesenatico is a port town with about 20,000 inhabitants on the Adriatic coast of Italy. It is located in the province of Forlì-Cesena in the region of Emilia-Romagna, about 30 km south of Ravenna...
in 1800. He participated in several sea battle
Sea Battle
Sea Battle is a multiplayer strategy game released by Mattel for its Intellivision video game system in 1980. In the game, players command fleets of naval vessels attempting to invade the harbor of their opponent.-Gameplay:...
s during the Napoleonic Wars
Napoleonic Wars
The Napoleonic Wars were a series of wars declared against Napoleon's French Empire by opposing coalitions that ran from 1803 to 1815. As a continuation of the wars sparked by the French Revolution of 1789, they revolutionised European armies and played out on an unprecedented scale, mainly due to...
, so successfully that he was made a post captain at the age of 25. In 1810, he was knight
Knight
A knight was a member of a class of lower nobility in the High Middle Ages.By the Late Middle Ages, the rank had become associated with the ideals of chivalry, a code of conduct for the perfect courtly Christian warrior....
ed for his services at the Invasion of Cayenne
Invasion of Cayenne (1809)
The Invasion of Cayenne was a combined military operation by an Anglo-Portuguese-Brazilian expeditionary force against Cayenne, capital of the French South American colony of French Guiana in 1809, during the Napoleonic Wars...
.

In 1812, he commanded the frigate , then stationed in the Bahamas. He captured the pirate ship Heureuse Réunion
French frigate Félicité (1785)
The Félicité was a 32-gun frigate of the French Navy, lead ship of her class. Captured by the British Navy and sold to the State of Haiti, she entered Haitian service as Améthyste.-French service:In 1792, she traveled to the Caribbean Sea...
at the Action of 3 February 1812
Action of 3 February 1812
The Action of 3 February 1812 was an unusual minor naval engagement between a British frigate and a large pirate ship manned by a loose collation of Haitian rebels off the western coast of Haiti. The battle was fought against the background of the Napoleonic Wars and the collapse of government in...
and the American brig in November 1812, but shortly afterwards Southampton and Vixen were wrecked in the Crooked Island passage, although no lives were lost. As was customary in the case of the loss of a ship from any cause, Yeo was court martialled, but the court accepted that the reef on which he was wrecked was not charted, nor were the local currents documented, and Yeo was exonerated. He was sent to Canada
Canada
Canada is a North American country consisting of ten provinces and three territories. Located in the northern part of the continent, it extends from the Atlantic Ocean in the east to the Pacific Ocean in the west, and northward into the Arctic Ocean...
to command the British naval forces in the Great Lakes
Great Lakes
The Great Lakes are a collection of freshwater lakes located in northeastern North America, on the Canada – United States border. Consisting of Lakes Superior, Michigan, Huron, Erie, and Ontario, they form the largest group of freshwater lakes on Earth by total surface, coming in second by volume...
during the War of 1812.

Sir James's use of his small navy was always determined and skilful, but he was hampered by a lack of cooperation from the British army. The commander of these forces, Sir George Prevost
George Prevost
Sir George Prévost, 1st Baronet was a British soldier and colonial administrator. Born in Hackensack, New Jersey, the eldest son of Swiss French Augustine Prévost, he joined the British Army as a youth and became a captain in 1784. Prévost served in the West Indies during the French Revolutionary...
, failed to follow up key advances made by Sir James at Sackett's Harbour
Sackets Harbor, New York
Sackets Harbor is a village in Jefferson County, New York, United States. The population was 1,386 at the 2000 census. The village was named after land developer and owner Augustus Sackett, who founded it in the early 19th century.The Village of Sackets Harbor is within the western part of the...
and elsewhere that might have resulted in major British victories. On the whole, historian
Historian
A historian is a person who studies and writes about the past and is regarded as an authority on it. Historians are concerned with the continuous, methodical narrative and research of past events as relating to the human race; as well as the study of all history in time. If the individual is...
s regard the war on Lake Ontario
Lake Ontario
Lake Ontario is one of the five Great Lakes of North America. It is bounded on the north and southwest by the Canadian province of Ontario, and on the south by the American state of New York. Ontario, Canada's most populous province, was named for the lake. In the Wyandot language, ontarío means...
as having been a draw. During the final months of the war, Yeo ensured British control of the lake by the 1814 launch of the , a 112 gun first rate ship of the line
Ship of the line
A ship of the line was a type of naval warship constructed from the 17th through the mid-19th century to take part in the naval tactic known as the line of battle, in which two columns of opposing warships would manoeuvre to bring the greatest weight of broadside guns to bear...
built in Kingston
Kingston, Ontario
Kingston, Ontario is a Canadian city located in Eastern Ontario where the St. Lawrence River flows out of Lake Ontario. Originally a First Nations settlement called "Katarowki," , growing European exploration in the 17th Century made it an important trading post...
specifically for use on the lake.

After the British-American War, Yeo held important commands on the West Africa
West Africa
West Africa or Western Africa is the westernmost region of the African continent. Geopolitically, the UN definition of Western Africa includes the following 16 countries and an area of approximately 5 million square km:-Flags of West Africa:...
n and Caribbean
Caribbean
The Caribbean is a crescent-shaped group of islands more than 2,000 miles long separating the Gulf of Mexico and the Caribbean Sea, to the west and south, from the Atlantic Ocean, to the east and north...
stations, but saw no further action. He died in 1818 at the age of 35, while returning from Jamaica
Jamaica
Jamaica is an island nation of the Greater Antilles, in length, up to in width and 10,990 square kilometres in area. It is situated in the Caribbean Sea, about south of Cuba, and west of Hispaniola, the island harbouring the nation-states Haiti and the Dominican Republic...
to England
England
England is a country that is part of the United Kingdom. It shares land borders with Scotland to the north and Wales to the west; the Irish Sea is to the north west, the Celtic Sea to the south west, with the North Sea to the east and the English Channel to the south separating it from continental...
.

The Yeo Hall at the Royal Military College of Canada
Royal Military College of Canada
The Royal Military College of Canada, RMC, or RMCC , is the military academy of the Canadian Forces, and is a degree-granting university. RMC was established in 1876. RMC is the only federal institution in Canada with degree granting powers...
in Kingston, Ontario
Kingston, Ontario
Kingston, Ontario is a Canadian city located in Eastern Ontario where the St. Lawrence River flows out of Lake Ontario. Originally a First Nations settlement called "Katarowki," , growing European exploration in the 17th Century made it an important trading post...
was named in his honour in 1936. This multifunctional building houses the Cadet Dining Hall and the Cadet Mess. The barber and Canadian Forces Exchange System
Canadian Forces Exchange System
The Canadian Forces Exchange System or CANEX, a unit of the Canadian Forces that was established in 1968, is tasked with supporting the Canadian Forces operational effectiveness, contributing to morale, espirit de corps and unit cohesion...
(CANEX) are located in the basement.
A plaque erected by the Historic Sites and Monuments Board of Canada at the Royal Military College of Canada states "Born in Southampton, England, Yeo entered the British Navy, served throughout the Napoleonic Wars and won rapid promotion by his ability. In 1813, already a Commodore, he came to Canada to command British forces on the Great Lakes. Yeo successfully blockaded the American fleet in Sackett's Harbour for some months and subsequently commanded the naval forces at the capture of Oswego in 1814. Returning to England after the war he was posted to the West African Coast and died at sea while returning from that tour of duty."