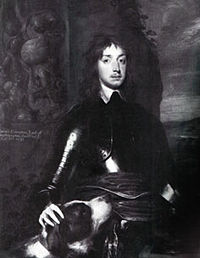 James Compton, 3rd Earl of Northampton (19 August 1622 – 15 December 1681), known as Lord Compton from 1630 to 1643, was an English
England
England is a country that is part of the United Kingdom. It shares land borders with Scotland to the north and Wales to the west; the Irish Sea is to the north west, the Celtic Sea to the south west, with the North Sea to the east and the English Channel to the south separating it from continental...
peer
Peerage
The Peerage is a legal system of largely hereditary titles in the United Kingdom, which constitute the ranks of British nobility and is part of the British honours system...
, soldier
Soldier
A soldier is a member of the land component of national armed forces; whereas a soldier hired for service in a foreign army would be termed a mercenary...
and politician
Politician
A politician, political leader, or political figure is an individual who is involved in influencing public policy and decision making...
.

Northampton was the eldest son of Spencer Compton, 2nd Earl of Northampton
Spencer Compton, 2nd Earl of Northampton
Spencer Compton, 2nd Earl of Northampton , styled Lord Compton from 1618 to 1630, was an English peer, soldier and politician....
, and Mary Beaumont. He sat as Member of Parliament
Member of Parliament
A Member of Parliament is a representative of the voters to a :parliament. In many countries with bicameral parliaments, the term applies specifically to members of the lower house, as upper houses often have a different title, such as senate, and thus also have different titles for its members,...
for Warwickshire
Warwickshire (UK Parliament constituency)
Warwickshire was a parliamentary constituency in the Warwickshire in England. It returned two Members of Parliament , traditionall known as knights of the shire, to the House of Commons of the Parliament of the United Kingdom, elected by the bloc vote system.-Boundaries and franchise:The...
from 1640 to 1642. The following year his father was killed at the Battle of Hopton Heath
Battle of Hopton Heath
The Battle of Hopton Heath, in Staffordshire, was a battle of the First English Civil War, fought on Sunday 19 March 1643 between Parliamentarian forces led by Sir John Gell, 1st Baronet and Sir William Brereton and a Royalist force under Spencer Compton, 2nd Earl of Northampton...
and he succeeded in the earldom. Like his father, Northampton was an ardent Royalist and during the Civil War
English Civil War
The English Civil War was a series of armed conflicts and political machinations between Parliamentarians and Royalists...
notably commanded the cavalry at the First Battle of Newbury
First Battle of Newbury
The First Battle of Newbury was a battle of the First English Civil War that was fought on 20 September 1643 between a Royalist army, under the personal command of King Charles, and a Parliamentarian force led by the Earl of Essex...
in 1643. He was also Lord Lieutenant of Warwickshire
Lord Lieutenant of Warwickshire
This is an incomplete list of people who have served as Lord Lieutenant of Warwickshire. Since 1728, all Lord Lieutenants have also been Custos Rotulorum of Warwickshire.-Lord Lieutenants of Warwickshire:*Ambrose Dudley, 3rd Earl of Warwick 1569–1570*vacant...
between 1660 and 1681 and Constable of the Tower of London from 1675 to 1679.