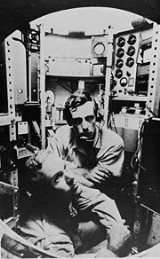 Encyclopedia
Jacques Piccard was a Swiss oceanographer and engineer, known for having developed underwater vehicles for studying ocean currents. He was one of only two people, along with Lt. Don Walsh
Don Walsh
Don Walsh is an American oceanographer, explorer and marine policy specialist. He and Jacques Piccard were aboard the bathyscaphe Trieste when it made a record maximum descent into the Mariana Trench on 23 January 1960, the deepest point of the world's ocean...
of the United States Navy
United States Navy
The United States Navy is the naval warfare service branch of the United States Armed Forces and one of the seven uniformed services of the United States. The U.S. Navy is the largest in the world; its battle fleet tonnage is greater than that of the next 13 largest navies combined. The U.S...
, to have explored the deepest part of the world's ocean, and the deepest location on the surface of the Earth's crust, the Challenger Deep
Challenger Deep
The Challenger Deep is the deepest known point in the oceans, with a depth of to by direct measurement from submersibles, and slightly more by sonar bathymetry . It is located at the southern end of the Mariana Trench near the Mariana Islands group...
, in the Mariana Trench
Mariana Trench
The Mariana Trench or Marianas Trench is the deepest part of the world's oceans. It is located in the western Pacific Ocean, to the east of the Mariana Islands. The trench is about long but has a mean width of only...
located in the western North Pacific Ocean.

Jacques Piccard was born in Brussels
Brussels
Brussels , officially the Brussels Region or Brussels-Capital Region , is the capital of Belgium and the de facto capital of the European Union...
, Belgium to Auguste Piccard
Auguste Piccard
Auguste Antoine Piccard was a Swiss physicist, inventor and explorer.-Biography:Piccard and his twin brother Jean Felix were born in Basel, Switzerland...
, who was himself an adventurer and engineer. Jacques' father Auguste twice beat the record for reaching the highest altitude in a balloon, during 1931–1932. The Piccard family thus has the unique distinction of breaking world records for both the highest flight and the deepest dive.

Jacques's father, who had already set altitude records in his balloon, started using the buoyancy technique used in balloons for developing a submersible
Submersible
A submersible is a small vehicle designed to operate underwater. The term submersible is often used to differentiate from other underwater vehicles known as submarines, in that a submarine is a fully autonomous craft, capable of renewing its own power and breathing air, whereas a submersible is...
vehicle, the bathyscaphe
Bathyscaphe
A bathyscaphe is a free-diving self-propelled deep-sea submersible, consisting of a crew cabin similar to a bathysphere, but suspended below a float rather than from a surface cable, as in the classic bathysphere design....
. Jacques initially started out his career by teaching economics at University of Geneva while continuing helping his father improve the bathyscaphe to demonstrate its potential for operating in deep waters. Together they built three bathyscaphes between 1948 and 1955, which reached record depths of 4,600 feet and 10,000 feet (the last one was bought by the government). With this success, the younger Piccard abandoned economics to collaborate with his father on further improving the bathyscaphe and demonstrating its practicality for exploration and research.

Jacques sought financial help from the U.S. Navy, which at that time was exploring various ways of designing submarines for underwater research. Jacques was welcomed to the U.S. to demonstrate his bathyscaphe, now named the Trieste
Bathyscaphe Trieste
The Trieste is a Swiss-designed, Italian-built deep-diving research bathyscaphe with a crew of two, which reached a record maximum depth of about , in the deepest known part of the Earth's oceans, the Challenger Deep, in the Mariana Trench near Guam, on January 23, 1960, crewed by Jacques Piccard ...
. Impressed by his designs, the U.S. Navy bought the vessel and hired Piccard as a consultant. Recognizing the strategic value of a workable submersible for submarine salvage and rescue, the Navy began testing the Trieste for greater depths.

With his Trieste able to reach depths of 24,000 feet, Piccard and his colleagues planned on an even greater challenge—a voyage to the bottom of the sea. On 23 January 1960, Piccard and Lt. Don Walsh
Don Walsh
Don Walsh is an American oceanographer, explorer and marine policy specialist. He and Jacques Piccard were aboard the bathyscaphe Trieste when it made a record maximum descent into the Mariana Trench on 23 January 1960, the deepest point of the world's ocean...
reached the floor of the Mariana Trench
Mariana Trench
The Mariana Trench or Marianas Trench is the deepest part of the world's oceans. It is located in the western Pacific Ocean, to the east of the Mariana Islands. The trench is about long but has a mean width of only...
located in the western North Pacific Ocean. The depth of the descent was measured at 10,916 meters (35,813 feet); later, more accurate, measurements during 1995 found the Mariana Trench to be slightly less deep at 10,911 m (35,797 ft). The descent took almost five hours. The bathyscaphe carried no scientific equipment and no experiments were conducted; the mission's purpose was merely to prove that the depth could be reached. The descent progressed without incident until 30,000 feet, when the crew heard a loud crack. They continued the dive, however, finally touching down in "snuff-colored ooze" at 35,800 feet.

When they reached the featureless seabed, they saw a flat fish as well as a new type of shrimp. Marine biologists later disputed their observations, claiming that no fish could survive the 17,000 psi
Pounds per square inch
The pound per square inch or, more accurately, pound-force per square inch is a unit of pressure or of stress based on avoirdupois units...
pressure at such depths. Upon discovering cracks in the viewing windows, Piccard cut the voyage short. After only a 20-minute stay on the bottom, they began dumping ballast for their return to the surface, and the damaged vessel returned to its escort ships without incident in three hours and 15 minutes.

The historic dive received worldwide attention, and Piccard wrote an account of it, Seven Miles Down, with Robert Deitz, a renowned geologist who had helped plan the mission. A planned return expedition, however, never occurred. The Trieste was expensive to maintain and operate. It was incapable of collecting samples and could not take photographs and so had little scientific data to show for its voyages. The original vessel was retired in 1961, although a rebuilt version later located the remains of two lost U.S. Navy nuclear submarines, the Thresher
USS Thresher (SSN-593)
The second USS Thresher was the lead ship of her class of nuclear-powered attack submarines in the United States Navy. Her loss at sea during deep-diving tests in 1963 is often considered a watershed event in the implementation of the rigorous submarine safety program SUBSAFE.The contract to build...
and the Scorpion
USS Scorpion (SSN-589)
USS Scorpion was a Skipjack-class nuclear submarine of the United States Navy, and the sixth ship of the U.S. Navy to carry that name. Scorpion was declared lost on 5 June 1968 with 99 crew members dying in the incident. The USS Scorpion is one of two nuclear submarines the U.S...
.

On 14 July 1969, just two days before the Apollo 11
Apollo 11
In early 1969, Bill Anders accepted a job with the National Space Council effective in August 1969 and announced his retirement as an astronaut. At that point Ken Mattingly was moved from the support crew into parallel training with Anders as backup Command Module Pilot in case Apollo 11 was...
launch, the Ben Franklin
Ben Franklin (PX-15)
The Ben Franklin mesoscaphe, also known as the Grumman/Piccard PX-15, was a manned underwater submersible built in 1968. It was the brainchild of explorer and inventor Jacques Piccard. The research vessel was designed to house a six-man crew for up to 30 days of oceanographic study in the depths of...
, also known as the Grumman/Piccard PX-15 mesoscaphe, was towed to the high-velocity center of the Gulf Stream
Gulf Stream
The Gulf Stream, together with its northern extension towards Europe, the North Atlantic Drift, is a powerful, warm, and swift Atlantic ocean current that originates at the tip of Florida, and follows the eastern coastlines of the United States and Newfoundland before crossing the Atlantic Ocean...
off the coast of Palm Beach, Florida
Palm Beach, Florida
The Town of Palm Beach is an incorporated town in Palm Beach County, Florida, United States. The Intracoastal Waterway separates it from the neighboring cities of West Palm Beach and Lake Worth...
. Once on site, the Ben Franklin with its six-man, international crew descended to 1,000 feet off of Riviera Beach, Florida and drifted 1,444 miles north with the current for more than four weeks, surfacing near Maine.

A crew of six was chosen. Jacques Piccard was the mission leader; Erwin Aebersold, another Swiss, was Piccard’s handpicked pilot and main assistant to Piccard and project engineer during the Franklin's design and construction. Grumman selected a Navy submariner named Don Kazimir to be captain. The U.S. Navy Oceanographic Office sent Frank Busby to conduct a bottom survey along the drift track over the Continental Shelf
Continental shelf
The continental shelf is the extended perimeter of each continent and associated coastal plain. Much of the shelf was exposed during glacial periods, but is now submerged under relatively shallow seas and gulfs, and was similarly submerged during other interglacial periods. The continental margin,...
and the Royal Navy
Royal Navy
The Royal Navy is the naval warfare service branch of the British Armed Forces. Founded in the 16th century, it is the oldest service branch and is known as the Senior Service...
sent Ken Haigh, an acoustic specialist, who studied underwater acoustics and performed sonic experiments up and down the water column throughout the mission. The sixth man was Chet May from NASA
NASA
The National Aeronautics and Space Administration is the agency of the United States government that is responsible for the nation's civilian space program and for aeronautics and aerospace research...
. His specialty was "man working in space". Wernher von Braun
Wernher von Braun
Wernher Magnus Maximilian, Freiherr von Braun was a German rocket scientist, aerospace engineer, space architect, and one of the leading figures in the development of rocket technology in Nazi Germany during World War II and in the United States after that.A former member of the Nazi party,...
learned about the Franklin mission, visited the submarine in Palm Beach, and considered the mission a kind of analogue to a prolonged mission in space, such as on the forthcoming Skylab
Skylab
Skylab was a space station launched and operated by NASA, the space agency of the United States. Skylab orbited the Earth from 1973 to 1979, and included a workshop, a solar observatory, and other systems. It was launched unmanned by a modified Saturn V rocket, with a mass of...
. He appointed May as a NASA observer to accompany the mission and study the effects of prolonged isolation on the human crew.

Ambient artists Mathieu Ruhlmann and Celer
Celer (group)
Celer are an experimental music group based in Huntington Beach, California, U.S.A..-About:Founded in 2005, at the beginning of their relationship, Celer was created as a musical and artistic collaboration between Danielle Baquet-Long and Will Long...
collaboratively released an album called Mesoscaphe in 2008, dedicated to the voyage of the Ben Franklin.

On 1 February 2008, Piccard was honored Doctor honoris causa at the Catholic University of Louvain (Louvain-la-Neuve).

Piccard was the founder of the Foundation for the Study and Protection of Seas and Lakes, based in Cully, Switzerland.

Jacques Piccard constructed four submarines and applied for at least one US patent (D200,506) for a submarine: