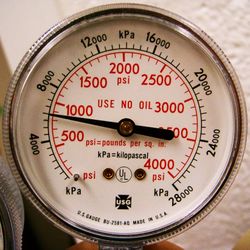 The pound per square inch or, more accurately, pound-force per square inch (symbol: psi or lbf/in2 or lbf/in2 or lbf/sq in or lbf/sq in) is a unit of pressure
Pressure
Pressure is the force per unit area applied in a direction perpendicular to the surface of an object. Gauge pressure is the pressure relative to the local atmospheric or ambient pressure.- Definition :...
or of stress
Stress (physics)
In continuum mechanics, stress is a measure of the internal forces acting within a deformable body. Quantitatively, it is a measure of the average force per unit area of a surface within the body on which internal forces act. These internal forces are a reaction to external forces applied on the body...
based on avoirdupois
Avoirdupois
The avoirdupois system is a system of weights based on a pound of 16 ounces. It is the everyday system of weight used in the United States and is still widely used to varying degrees by many people in Canada, the United Kingdom, and some other former British colonies despite the official adoption...
units. It is the pressure resulting from a force of one pound-force
Pound-force
The pound force is a unit of force in some systems of measurement including English engineering units and British gravitational units.- Definitions :...
applied to an area of one square inch
Square inch
A square inch is a unit of area, equal to the area of a square with sides of one inch. The following symbols are used to denote square inches:*square in*sq inches, sq inch, sq in*inches/-2, inch/-2, in/-2...
: