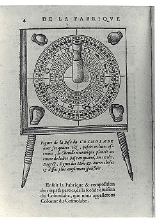 Encyclopedia
Jacques Besson was a French Protestant inventor, mathematician, and philosopher, chiefly remembered for his popular treatise on machines Theatrum Instrumentorum (1571–72), which saw many reprints in different languages.

Little information has survived about Besson's early life; he described himself as being from Colombières, near Briançon
Briançon
Briançon a commune in the Hautes-Alpes department in the Provence-Alpes-Côte d'Azur region in southeastern France. It is a sub-prefecture of the department....
. He was most likely born around 1540. In the early 1550s he is recorded as teaching mathematics in Paris
Paris
Paris is the capital and largest city in France, situated on the river Seine, in northern France, at the heart of the Île-de-France region...
, following which the next account of him dates from April 1557, when he is recorded in the minutes of the town council of Lausanne
Lausanne
Lausanne is a city in Romandy, the French-speaking part of Switzerland, and is the capital of the canton of Vaud. The seat of the district of Lausanne, the city is situated on the shores of Lake Geneva . It faces the French town of Évian-les-Bains, with the Jura mountains to its north-west...
, Switzerland
Switzerland
Switzerland name of one of the Swiss cantons. ; ; ; or ), in its full name the Swiss Confederation , is a federal republic consisting of 26 cantons, with Bern as the seat of the federal authorities. The country is situated in Western Europe,Or Central Europe depending on the definition....
, as being paid for models of pump
Pump
A pump is a device used to move fluids, such as liquids, gases or slurries.A pump displaces a volume by physical or mechanical action. Pumps fall into three major groups: direct lift, displacement, and gravity pumps...
s and fountain
Fountain
A fountain is a piece of architecture which pours water into a basin or jets it into the air either to supply drinking water or for decorative or dramatic effect....
s.

In 1559 he published his first treatise in Zurich
Zürich
Zurich is the largest city in Switzerland and the capital of the canton of Zurich. It is located in central Switzerland at the northwestern tip of Lake Zurich...
, the De absoluta ratione extrahendi olea et aquas e medicamentis simplicibus (on the complete doctrine of extracting oils and waters from simple drugs), featuring an introduction by Conrad Gesner. That same year he moved to Geneva
Geneva
Geneva In the national languages of Switzerland the city is known as Genf , Ginevra and Genevra is the second-most-populous city in Switzerland and is the most populous city of Romandie, the French-speaking part of Switzerland...
where in 1561 he requested permission to become a citizen of Geneva. His entry in Geneva's Livre de Bourgeois notes that citizenship was awarded as a result of his services "in teaching the art and science of mathematics"

In 1562 Besson became the pastor
Pastor
The word pastor usually refers to an ordained leader of a Christian congregation. When used as an ecclesiastical styling or title, this role may be abbreviated to "Pr." or often "Ps"....
of the Protestant Reformed Church in Villeneuve-de-Berg
Villeneuve-de-Berg
Villeneuve-de-Berg is a commune in the Ardèche department in southern France.-Geography:The village lies in the north central part of the commune, on the right bank of the river Ibie, which flows southward through the commune.-Population:-References:*...
, France
France
The French Republic , The French Republic , The French Republic , (commonly known as France , is a unitary semi-presidential republic in Western Europe with several overseas territories and islands located on other continents and in the Indian, Pacific, and Atlantic oceans. Metropolitan France...
, Olivier de Serres
Olivier de Serres
Olivier de Serres was a French author and soil scientist whose Théâtre d'Agriculture was the text book of French agriculture in the 17th century..Serres was born at Villeneuve-de-Berg, Ardèche...
having sent a request to the Company of Pastors for a minister. However, less than two years later he was forced out by a rival. By 1565 he was back in Paris, where in 1567 he published his second treatise, Le Cosmolabe, which described an elaborate instrument based on the astrolabe
Astrolabe
An astrolabe is an elaborate inclinometer, historically used by astronomers, navigators, and astrologers. Its many uses include locating and predicting the positions of the Sun, Moon, planets, and stars, determining local time given local latitude and longitude, surveying, triangulation, and to...
which could be used for navigation
Navigation
Navigation is the process of monitoring and controlling the movement of a craft or vehicle from one place to another. It is also the term of art used for the specialized knowledge used by navigators to perform navigation tasks...
, surveying
Surveying
See Also: Public Land Survey SystemSurveying or land surveying is the technique, profession, and science of accurately determining the terrestrial or three-dimensional position of points and the distances and angles between them...
, cartography
Cartography
Cartography is the study and practice of making maps. Combining science, aesthetics, and technique, cartography builds on the premise that reality can be modeled in ways that communicate spatial information effectively.The fundamental problems of traditional cartography are to:*Set the map's...
, and astronomy
Astronomy
Astronomy is a natural science that deals with the study of celestial objects and phenomena that originate outside the atmosphere of Earth...
. Le Cosmolabe also introduced a number of mechanical inventions that he hoped to describe in more detail in a future work. Besson was described as a professor of mathematics from Orléans
Orléans
-Prehistory and Roman:Cenabum was a Gallic stronghold, one of the principal towns of the Carnutes tribe where the Druids held their annual assembly. It was conquered and destroyed by Julius Caesar in 52 BC, then rebuilt under the Roman Empire...
.

When King Charles IX
Charles IX of France
Charles IX was King of France, ruling from 1560 until his death. His reign was dominated by the Wars of Religion. He is best known as king at the time of the St. Bartholomew's Day Massacre.-Childhood:...
of France
France
The French Republic , The French Republic , The French Republic , (commonly known as France , is a unitary semi-presidential republic in Western Europe with several overseas territories and islands located on other continents and in the Indian, Pacific, and Atlantic oceans. Metropolitan France...
made a royal visit to Orléans in 1569, Besson presented to the King a draft of his new treatise, what was to become the Theatrum Instrumentorum. and returned with him to Paris
Paris
Paris is the capital and largest city in France, situated on the river Seine, in northern France, at the heart of the Île-de-France region...
as "master of the King's Engines". Charles gave Besson exclusive rights to his designs in that same year. While employed by the court, Besson also created an ingenious screw-cutting lathe that was semi-automatic, in that the operator only needed to pull and release a cord.

Besson's Theatrum Instrumentorum (Theater of Machines), was completed and published in 1571 or 1572. It was a unique work; previously, works on engineering and technology such as Valturio's De re militari (1472), Biringuccio's Pirotechnia (1540) and Agricola's De re metallica
De re metallica
De re metallica is a book cataloguing the state of the art of mining, refining, and smelting metals, published in 1556. The author was Georg Bauer, whose pen name was the Latinized Georgius Agricola...
(1556), had had only limited descriptions of new inventions or recounted inventions of the past without much detail. In contrast, Besson's work was a collection of his own new inventions with detailed illustrations of each engraved by Jacques Androuet du Cerceau to his specifications. Some of his designs suggested important improvements to lathe
Lathe
A lathe is a machine tool which rotates the workpiece on its axis to perform various operations such as cutting, sanding, knurling, drilling, or deformation with tools that are applied to the workpiece to create an object which has symmetry about an axis of rotation.Lathes are used in woodturning,...
s and the waterwheel. The Latin
Latin
Latin is an Italic language originally spoken in Latium and Ancient Rome. It, along with most European languages, is a descendant of the ancient Proto-Indo-European language. Although it is considered a dead language, a number of scholars and members of the Christian clergy speak it fluently, and...
captions to the highly detailed drawings were sparse, however, which would seem to indicate that the text was probably produced in a hurry. Even the title page does not give the name of the printer or the date of publication. The rush in publishing the book may have been due to the crackdown on French Protestants that culminated in the St. Bartholomew's Day Massacre
St. Bartholomew's Day massacre
The St. Bartholomew's Day massacre in 1572 was a targeted group of assassinations, followed by a wave of Roman Catholic mob violence, both directed against the Huguenots , during the French Wars of Religion...
of 1572.

Although Besson was favoured by King Charles IX, he feared the increasing anti-Protestant sentiment in France, and emigrated to England shortly after the St. Bartholomew's Day Massacre of 1572, where he died in 1573.

The Theatrum Instrumentorum had proved so popular that a second edition appeared in 1578, with more detailed descriptions of the instruments and machines by François Béroalde de Verville. The copper plates from the original edition were reused, except for four which were replaced by new engravings produced by René Boyvin
René Boyvin
René Boyvin was an influential French engraver who lived in Angers.-Reference:Jacques Levron: René Boyvin, graveur angevin du 16e siècle, avec catalogue de son oeuvre et la reproduction de 114 estampes. Angers 1941.-Link:...
.