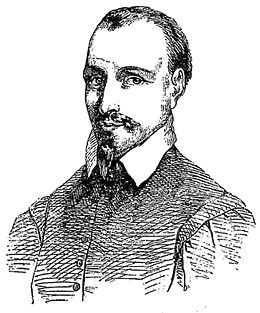 Olivier de Serres was a French author and soil scientist whose Théâtre d'Agriculture (1600) was the text book of French agriculture in the 17th century..

Serres was born at Villeneuve-de-Berg
Villeneuve-de-Berg
Villeneuve-de-Berg is a commune in the Ardèche department in southern France.-Geography:The village lies in the north central part of the commune, on the right bank of the river Ibie, which flows southward through the commune.-Population:-References:*...
, Ardèche
Ardèche
Ardèche is a department in south-central France named after the Ardèche River.- History :The area has been inhabited by humans at least since the Upper Paleolithic, as attested by the famous cave paintings at Chauvet Pont d'Arc. The plateau of the Ardeche River has extensive standing stones ,...
. His book was notable for its recommendation to wine growers that they plant 5-6 varieties in their vineyards to balance the risk of a crop failing, and the early advocating of crop rotation
Crop rotation
Crop rotation is the practice of growing a series of dissimilar types of crops in the same area in sequential seasons.Crop rotation confers various benefits to the soil. A traditional element of crop rotation is the replenishment of nitrogen through the use of green manure in sequence with cereals...
.
'Le théâtre de l'agriculture' recommends Métayage
Metayage
The Metayage system is the cultivation of land for a proprietor by one who receives a proportion of the produce, as a kind of sharecropping.-Origin and function:...
(Sharecropping
Sharecropping
Sharecropping is a system of agriculture in which a landowner allows a tenant to use the land in return for a share of the crop produced on the land . This should not be confused with a crop fixed rent contract, in which a landowner allows a tenant to use the land in return for a fixed amount of...
) as cash tenants took all the risks so would demand lower rent while hired labour was expensive to manage. Sharecroppers administer themselves and risks are divided with the landlord. Olivier only thought large landowners should take the risk of hiring labourers and running the estate themselves.