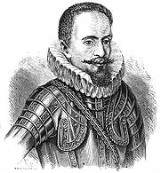 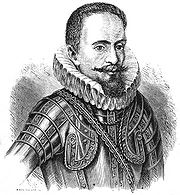 Jacob van Heemskerk was a Dutch
Netherlands
The Netherlands is a constituent country of the Kingdom of the Netherlands, located mainly in North-West Europe and with several islands in the Caribbean. Mainland Netherlands borders the North Sea to the north and west, Belgium to the south, and Germany to the east, and shares maritime borders...
explorer and later admiral
Admiral
Admiral is the rank, or part of the name of the ranks, of the highest naval officers. It is usually considered a full admiral and above vice admiral and below admiral of the fleet . It is usually abbreviated to "Adm" or "ADM"...
commanding the Dutch fleet
Naval fleet
A fleet, or naval fleet, is a large formation of warships, and the largest formation in any navy. A fleet at sea is the direct equivalent of an army on land....
at the Battle of Gibraltar
Battle of Gibraltar
The naval Battle of Gibraltar took place on 25 April 1607 during the Eighty Years' War when a Dutch fleet surprised and engaged a Spanish fleet anchored at the Bay of Gibraltar. During the four hours of action, most of the Spanish fleet was destroyed....
.

Van Heemskerk's early fame arose from an attempt to discover an Arctic
Arctic
The Arctic is a region located at the northern-most part of the Earth. The Arctic consists of the Arctic Ocean and parts of Canada, Russia, Greenland, the United States, Norway, Sweden, Finland, and Iceland. The Arctic region consists of a vast, ice-covered ocean, surrounded by treeless permafrost...
passage from Europe
Europe
Europe is, by convention, one of the world's seven continents. Comprising the westernmost peninsula of Eurasia, Europe is generally 'divided' from Asia to its east by the watershed divides of the Ural and Caucasus Mountains, the Ural River, the Caspian and Black Seas, and the waterways connecting...
to China
China
Chinese civilization may refer to:* China for more general discussion of the country.* Chinese culture* Greater China, the transnational community of ethnic Chinese.* History of China* Sinosphere, the area historically affected by Chinese culture...
. Two vessels sailed from Amsterdam on the 10th May 1596, under the command of van Heemskerck and Jan Rijp
Jan Rijp
Jan Corneliszoon Rijp was a semi-successful mariner in the late sixteenth and early seventieth centuries. Rijp is best known for his involvement with the Dutch explorer Willem Barentsz in finding a route to the East, avoiding the Spanish and the Portuguese navy in the South.In May, 1596, Rijp was...
. Willem Barentsz accompanied Heemskerck as pilot, and Gerrit de Veer
Gerrit de Veer
Gerrit de Veer was a Dutch officer on Willem Barentsz' third voyage in search of the Northeast passage. De Veer kept a diary of the voyage and in 1597 was the first person to observe and record the Novaya Zemlya effect, and the first westerner to observe hypervitaminosis A caused by consuming...
, the historian of the voyage, was on board as mate.

The masses of ice in the straits leading to the Kara Sea
Kara Sea
The Kara Sea is part of the Arctic Ocean north of Siberia. It is separated from the Barents Sea to the west by the Kara Strait and Novaya Zemlya, and the Laptev Sea to the east by the Severnaya Zemlya....
, and the impenetrable nature of the pack near Novaya Zemlya
Novaya Zemlya
Novaya Zemlya , also known in Dutch as Nova Zembla and in Norwegian as , is an archipelago in the Arctic Ocean in the north of Russia and the extreme northeast of Europe, the easternmost point of Europe lying at Cape Flissingsky on the northern island...
, had suggested the advisability of avoiding the land and, by keeping a northerly course, of seeking a passage in the open sea. They sailed northwards, and on the 9th of June discovered Bear Island in the Barents Sea
Barents Sea
The Barents Sea is a marginal sea of the Arctic Ocean, located north of Norway and Russia. Known in the Middle Ages as the Murman Sea, the sea takes its current name from the Dutch navigator Willem Barents...
. Continuing on the same course they sighted a mountainous snow-covered land in about 80 N. lat., soon afterwards being stopped by the polar pack ice. This important discovery was named Spitsbergen
Spitsbergen
Spitsbergen is the largest and only permanently populated island of the Svalbard archipelago in Norway. Constituting the western-most bulk of the archipelago, it borders the Arctic Ocean, the Norwegian Sea and the Greenland Sea...
(now known as Svalbard
Svalbard
Svalbard is an archipelago in the Arctic, constituting the northernmost part of Norway. It is located north of mainland Europe, midway between mainland Norway and the North Pole. The group of islands range from 74° to 81° north latitude , and from 10° to 35° east longitude. Spitsbergen is the...
), and was believed (incorrectly) to be a part of Greenland
Greenland
Greenland is an autonomous country within the Kingdom of Denmark, located between the Arctic and Atlantic Oceans, east of the Canadian Arctic Archipelago. Though physiographically a part of the continent of North America, Greenland has been politically and culturally associated with Europe for...
.

Arriving at Bear Island again on the 1st of July, Rijp parted company, while Heemskerck and Barents proceeded eastward, intending to pass round the northern extreme of Novaya Zemlya. On the 26th of August they reached Ice Haven, after rounding the northern extremity of the land. Here their vessel became anchored in ice and they wintered in a house built out of driftwood and planks from the tween decks and the deck-house of the vessel. 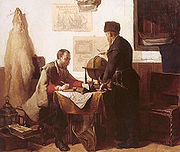 On 13 June they made their way in two open boats to the Lapland coast; but Barents died during the voyage, on 20 June. This was the first time that an arctic winter was successfully faced; The voyage stands in the first rank among the polar enterprises of the 16th century, and led to a flourishing whale and seal fisheries which long enriched the Netherlands.

Van Heemskerck later served as a vice admiral, protecting Dutch merchant shipping on voyages to China and the East Indies
East Indies
East Indies is a term used by Europeans from the 16th century onwards to identify what is now known as Indian subcontinent or South Asia, Southeastern Asia, and the islands of Oceania, including the Malay Archipelago and the Philippines...
, participating in the second Dutch expedition to Indonesia. He died as a result of leg wounds caused by cannonball
Round shot
Round shot is a solid projectile without explosive charge, fired from a cannon. As the name implies, round shot is spherical; its diameter is slightly less than the bore of the gun it is fired from.Round shot was made in early times from dressed stone, but by the 17th century, from iron...
, shortly after the Battle of Gibraltar, an engagement in which a Spanish fleet of 21 vessels was entirely destroyed. His body was returned to Amsterdam to be buried with full honours in the old Church. His suit of armour - minus a thigh plate shattered by the fatal cannonball - is in the Rijksmuseum
Rijksmuseum
The Rijksmuseum Amsterdam or simply Rijksmuseum is a Dutch national museum in Amsterdam, located on the Museumplein. The museum is dedicated to arts, crafts, and history. It has a large collection of paintings from the Dutch Golden Age and a substantial collection of Asian art...
in Amsterdam.

He has, over the years, lent his name to a number of vessels of the Royal Netherlands Navy
Royal Netherlands Navy
The Koninklijke Marine is the navy of the Netherlands. In the mid-17th century the Dutch Navy was the most powerful navy in the world and it played an active role in the wars of the Dutch Republic and later those of the Batavian Republic and the Kingdom of the Netherlands...
and a Boeing 737
Boeing 737
The Boeing 737 is a short- to medium-range, twin-engine narrow-body jet airliner. Originally developed as a shorter, lower-cost twin-engine airliner derived from Boeing's 707 and 727, the 737 has developed into a family of nine passenger models with a capacity of 85 to 215 passengers...
(PH-BDO) of the Dutch airline KLM.
The source of this article is wikipedia, the free encyclopedia.  The text of this article is licensed under the GFDL.