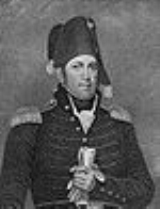 Encyclopedia
Jacob Jennings Brown was an American army officer in the War of 1812
War of 1812
The War of 1812 was a military conflict fought between the forces of the United States of America and those of the British Empire. The Americans declared war in 1812 for several reasons, including trade restrictions because of Britain's ongoing war with France, impressment of American merchant...
. His successes on the northern border during that war made him a hero. In 1821 he was appointed commanding general of the U.S. Army and held that post until his death.

Born in Bucks County, Pennsylvania
Bucks County, Pennsylvania
- Industry and commerce :The boroughs of Bristol and Morrisville were prominent industrial centers along the Northeast Corridor during World War II. Suburban development accelerated in Lower Bucks in the 1950s with the opening of Levittown, Pennsylvania, the second such "Levittown" designed by...
, Jacob Jennings Brown was the son of Samuel and Abi (White) Brown. His middle name was given to him in honor of his paternal grandmother who was a descendant of Samuel Jennings
Samuel Jennings
Samuel Jennings was born in England and died in Burlington, New Jersey, in 1708. Edward Byllynge appointed Jennings to the position of the first deputy-governor of West Jersey. In 1684, Byllynge removed him from his position as deputy....
, the latter having been a deputy governor of West Jersey
West Jersey
West Jersey and East Jersey were two distinct parts of the Province of New Jersey. The political division existed for 28 years, between 1674 and 1702...
and later receiver general of Pennsylvania in the early 18th century.

Raised a Quaker, Brown graduated from the University of Pennsylvania
University of Pennsylvania
The University of Pennsylvania is a private, Ivy League university located in Philadelphia, Pennsylvania, United States. Penn is the fourth-oldest institution of higher education in the United States,Penn is the fourth-oldest using the founding dates claimed by each institution...
in 1790. He taught school and in 1798 moved to upstate New York
New York
New York is a state in the Northeastern region of the United States. It is the nation's third most populous state. New York is bordered by New Jersey and Pennsylvania to the south, and by Connecticut, Massachusetts and Vermont to the east...
. There he was a pioneer settler and landowner in the Black River
Black River (New York)
The Black River is a blackwater river that empties into the eastern end of Lake Ontario on the shore of Jefferson County, New York in the United States of America...
country and helped open the area up for further settlement. He and his extended family established mills and a store, laid out roads and improved navigation on the lower Black River.

One biographer claimed that Brown received his earliest military training when he was a military secretary to Alexander Hamilton
Alexander Hamilton
Alexander Hamilton was a Founding Father, soldier, economist, political philosopher, one of America's first constitutional lawyers and the first United States Secretary of the Treasury...
during the winter of 1798-99, while Hamilton was organizing the U.S. Army for possible war with France. However, Hamilton's biographies state he did not have a secretary. Biographical sketches of Brown published in 1815 do not mention a connection between him and Hamilton.

In 1807, as one of the leading citizens of his county, Brown was commissioned as a captain in the 108th regiment of the New York Militia. Two years later, he was promoted to colonel. His initial commission was the result of regional political connections. However, his promotion to higher rank appears to have resulted from his aversion to frequent and expensive military parades in times of peace. On the frontier, it was time-consuming and expensive for scattered members of the militia to assemble for drill or other activities when they had farming and other occupations that demanded their time.

When the War of 1812
War of 1812
The War of 1812 was a military conflict fought between the forces of the United States of America and those of the British Empire. The Americans declared war in 1812 for several reasons, including trade restrictions because of Britain's ongoing war with France, impressment of American merchant...
began, Brown was a brigadier general in the New York militia, having been appointed to that rank in 1811. Though he opposed the war, he organized the defenses in the Great Lakes region. Troops led by Brown defeated the British at the Battle of Sackett's Harbor
Battle of Sackett's Harbor
The Second Battle of Sacket's Harbor or simply the Battle of Sacket's Harbor, took place on 29 May 1813, during the War of 1812. A British force was transported across Lake Ontario and attempted to capture the town, which was the principal dockyard and base for the American naval squadron on the lake...
on May 29, 1813. As a result of his actions there, he was given a commission as a brigadier general in the regular army. The next year his army captured Fort Erie
Capture of Fort Erie
The Capture of Fort Erie by American forces in 1814 was an incident in the War of 1812 between the United Kingdom and the United States. The British garrison was outnumbered but surrendered prematurely, in the view of British commanders.-Background:...
in Ontario
Ontario
Ontario is a province of Canada, located in east-central Canada. It is Canada's most populous province and second largest in total area. It is home to the nation's most populous city, Toronto, and the nation's capital, Ottawa....
. He was wounded twice at the Battle of Lundy's Lane
Battle of Lundy's Lane
The Battle of Lundy's Lane was a battle of the Anglo-American War of 1812, which took place on 25 July 1814, in present-day Niagara Falls, Ontario...
, one of the bloodiest engagements of the war for both sides. His last battle of the war was the Siege of Fort Erie
Siege of Fort Erie
The Siege of Fort Erie was one of the last and most protracted engagements between British and American forces during the Niagara campaign of the American War of 1812...
in 1814, which resulted in an American victory. His successes, in what was the northwest U.S. at that time, made him a national hero. To express its appreciation, Congress authorized the award to Brown of a Congressional Gold Medal on November 3, 1814. General Brown was the 24th American to receive the Congressional Gold Medal.

After the war, the U.S. Army was reduced in size. By 1821, he was the only major general in the service and President James Monroe
James Monroe
James Monroe was the fifth President of the United States . Monroe was the last president who was a Founding Father of the United States, and the last president from the Virginia dynasty and the Republican Generation...
made him commanding general. Despite a stroke he suffered in 1821, he functioned well in his new post. He reorganized the army staff into the form it retained for the rest of the century. He advised the secretaries of war and the presidents on military policy. He also pushed for the establishment of two post-graduate schools for the military, the precursors of present day staff and command colleges. Another first was his creation in 1822 of the General Recruiting Service
United States Army Recruiting Command
The United States Army Recruiting Command mission is to recruit the enlisted, non-commissioned and officer candidates for service in the United States Army and Army Reserve...
as the first organization responsible for providing manpower for the Army.

Two of General Brown's sons, Jacob and William Spencer, graduated from West Point
United States Military Academy
The United States Military Academy at West Point is a four-year coeducational federal service academy located at West Point, New York. The academy sits on scenic high ground overlooking the Hudson River, north of New York City...
. However, Jacob resigned after five years service in the army and William resigned after only six months. A third son, Nathan William, did not attend the academy but had a successful military career. In 1849, at age thirty-one, Nathan was appointed a major. In 1864, during the Civil War
American Civil War
The American Civil War was a civil war fought in the United States of America. In response to the election of Abraham Lincoln as President of the United States, 11 southern slave states declared their secession from the United States and formed the Confederate States of America ; the other 25...
, he was promoted to lieutenant colonel and served as deputy paymaster general. He became a brigadier general and paymaster general in 1880 and retired in 1882 after 33 years in the army. Brown's first born son, Gouverneur, drowned in an ice-skating accident at the age of twelve.

Katherine married Larkin Smith, a West Point classmate of her brother William. Smith resigned his army commission in 1861 to serve as assistant quartermaster general of the Confederate army. Pamela's husband, David Hammond Vinton, served in the same post during the Civil War, but on the Union side.

The following counties, towns and institutions are named after Jacob Jennings Brown: