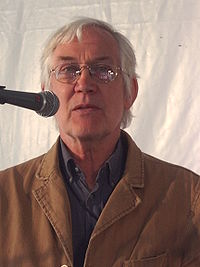 Jaan Kaplinski is an Estonia
Estonia
Estonia , officially the Republic of Estonia , is a state in the Baltic region of Northern Europe. It is bordered to the north by the Gulf of Finland, to the west by the Baltic Sea, to the south by Latvia , and to the east by Lake Peipsi and the Russian Federation . Across the Baltic Sea lies...
n poet
Poet
A poet is a person who writes poetry. A poet's work can be literal, meaning that his work is derived from a specific event, or metaphorical, meaning that his work can take on many meanings and forms. Poets have existed since antiquity, in nearly all languages, and have produced works that vary...
, philosopher, and culture critic. Kaplinski is known for his independent mind, focus on global issues and support for left-wing
Left-wing politics
In politics, Left, left-wing and leftist generally refer to support for social change to create a more egalitarian society...
/liberal thinking. He has been influenced by Eastern philosophical schools (taoism
Taoism
Taoism refers to a philosophical or religious tradition in which the basic concept is to establish harmony with the Tao , which is the mechanism of everything that exists...
and especially buddhism
Buddhism
Buddhism is a religion and philosophy encompassing a variety of traditions, beliefs and practices, largely based on teachings attributed to Siddhartha Gautama, commonly known as the Buddha . The Buddha lived and taught in the northeastern Indian subcontinent some time between the 6th and 4th...
).

Jaan Kaplinski has published numerous collections of poems, prose, and essays. He has translated writings from French
French language
French is a Romance language spoken as a first language in France, the Romandy region in Switzerland, Wallonia and Brussels in Belgium, Monaco, the regions of Quebec and Acadia in Canada, and by various communities elsewhere. Second-language speakers of French are distributed throughout many parts...
, English
English language
English is a West Germanic language that arose in the Anglo-Saxon kingdoms of England and spread into what was to become south-east Scotland under the influence of the Anglian medieval kingdom of Northumbria...
, Spanish
Spanish language
Spanish , also known as Castilian , is a Romance language in the Ibero-Romance group that evolved from several languages and dialects in central-northern Iberia around the 9th century and gradually spread with the expansion of the Kingdom of Castile into central and southern Iberia during the...
, Chinese
Chinese language
The Chinese language is a language or language family consisting of varieties which are mutually intelligible to varying degrees. Originally the indigenous languages spoken by the Han Chinese in China, it forms one of the branches of Sino-Tibetan family of languages...
, including the Tao Te Ching
Tao Te Ching
The Tao Te Ching, Dao De Jing, or Daodejing , also simply referred to as the Laozi, whose authorship has been attributed to Laozi, is a Chinese classic text...
, and Swedish
Swedish language
Swedish is a North Germanic language, spoken by approximately 10 million people, predominantly in Sweden and parts of Finland, especially along its coast and on the Åland islands. It is largely mutually intelligible with Norwegian and Danish...
, the work of Tomas Tranströmer
Tomas Tranströmer
Tomas Gösta Tranströmer is a Swedish writer, poet and translator, whose poetry has been translated into over 60 languages. Tranströmer is acclaimed as one of the most important Scandinavian writers since the Second World War...
.

Kaplinski's own work has been translated into English, Finnish
Finnish language
Finnish is the language spoken by the majority of the population in Finland Primarily for use by restaurant menus and by ethnic Finns outside Finland. It is one of the two official languages of Finland and an official minority language in Sweden. In Sweden, both standard Finnish and Meänkieli, a...
, French
French language
French is a Romance language spoken as a first language in France, the Romandy region in Switzerland, Wallonia and Brussels in Belgium, Monaco, the regions of Quebec and Acadia in Canada, and by various communities elsewhere. Second-language speakers of French are distributed throughout many parts...
, Norwegian
Norwegian language
Norwegian is a North Germanic language spoken primarily in Norway, where it is the official language. Together with Swedish and Danish, Norwegian forms a continuum of more or less mutually intelligible local and regional variants .These Scandinavian languages together with the Faroese language...
, Swedish
Swedish language
Swedish is a North Germanic language, spoken by approximately 10 million people, predominantly in Sweden and parts of Finland, especially along its coast and on the Åland islands. It is largely mutually intelligible with Norwegian and Danish...
, Dutch
Dutch language
Dutch is a West Germanic language and the native language of the majority of the population of the Netherlands, Belgium, and Suriname, the three member states of the Dutch Language Union. Most speakers live in the European Union, where it is a first language for about 23 million and a second...
, Icelandic
Icelandic language
Icelandic is a North Germanic language, the main language of Iceland. Its closest relative is Faroese.Icelandic is an Indo-European language belonging to the North Germanic or Nordic branch of the Germanic languages. Historically, it was the westernmost of the Indo-European languages prior to the...
, Hungarian
Hungarian language
Hungarian is a Uralic language, part of the Ugric group. With some 14 million speakers, it is one of the most widely spoken non-Indo-European languages in Europe....
, Japanese
Japanese language
is a language spoken by over 130 million people in Japan and in Japanese emigrant communities. It is a member of the Japonic language family, which has a number of proposed relationships with other languages, none of which has gained wide acceptance among historical linguists .Japanese is an...
, Latvian
Latvian language
Latvian is the official state language of Latvia. It is also sometimes referred to as Lettish. There are about 1.4 million native Latvian speakers in Latvia and about 150,000 abroad. The Latvian language has a relatively large number of non-native speakers, atypical for a small language...
, Lithuanian
Lithuanian language
Lithuanian is the official state language of Lithuania and is recognized as one of the official languages of the European Union. There are about 2.96 million native Lithuanian speakers in Lithuania and about 170,000 abroad. Lithuanian is a Baltic language, closely related to Latvian, although they...
, Russian
Russian language
Russian is a Slavic language used primarily in Russia, Belarus, Uzbekistan, Kazakhstan, Tajikistan and Kyrgyzstan. It is an unofficial but widely spoken language in Ukraine, Moldova, Latvia, Turkmenistan and Estonia and, to a lesser extent, the other countries that were once constituent republics...
, Hebrew
Hebrew language
Hebrew is a Semitic language of the Afroasiatic language family. Culturally, is it considered by Jews and other religious groups as the language of the Jewish people, though other Jewish languages had originated among diaspora Jews, and the Hebrew language is also used by non-Jewish groups, such...
, Bulgarian
Bulgarian language
Bulgarian is an Indo-European language, a member of the Slavic linguistic group.Bulgarian, along with the closely related Macedonian language, demonstrates several linguistic characteristics that set it apart from all other Slavic languages such as the elimination of case declension, the...
, and Czech
Czech language
Czech is a West Slavic language with about 12 million native speakers; it is the majority language in the Czech Republic and spoken by Czechs worldwide. The language was known as Bohemian in English until the late 19th century...
. His essays deal with environmental problems, philosophy of language
Philosophy of language
Philosophy of language is the reasoned inquiry into the nature, origins, and usage of language. As a topic, the philosophy of language for analytic philosophers is concerned with four central problems: the nature of meaning, language use, language cognition, and the relationship between language...
, classical Chinese poems, philosophy, buddhism
Buddhism
Buddhism is a religion and philosophy encompassing a variety of traditions, beliefs and practices, largely based on teachings attributed to Siddhartha Gautama, commonly known as the Buddha . The Buddha lived and taught in the northeastern Indian subcontinent some time between the 6th and 4th...
, and Estonian nationalism.

His semi-autobiographical novel The Same River is published by Peter Owen in English translation by Susan Wilson.

Kaplinski was a member of Riigikogu
Riigikogu
The Riigikogu is the unicameral parliament of Estonia. All important state-related questions pass through the Riigikogu...
(the Estonian parliament) from 1992 to 1995. He was originally a candidate on the Centre Party
Estonian Centre Party
The Estonian Centre Party is a centrist, social liberal party in Estonia. Keskerakond is a member of the European Liberal Democrat and Reform Party. It has the largest membership of an Estonian party, with over 12 000 members....
list, but soon became an independent representative. Since 2004 he has been a member of the Estonian Social Democratic Party
Social Democratic Party (Estonia)
The Social Democratic Party is a social-democratic party in Estonia, led by Sven Mikser. It has been a member of the Party of European Socialists since 16 May 2003 and a member of the Socialist International since November 1990....
. In the 2005, the local government elections he ran in Tartu and was ESDP's first candidate in their list. Jaan Kaplinski was elected as the second Social Democrat candidate (Estonia is using open list
Open list
Open list describes any variant of party-list proportional representation where voters have at least some influence on the order in which a party's candidates are elected...
system in local elections), collecting 1,045 votes. Jaan Kaplinski was one of those intellectuals who supported Toomas Hendrik Ilves
Toomas Hendrik Ilves
Toomas Hendrik Ilves is the fourth and current President of Estonia. He is a former diplomat and journalist, was the leader of the Social Democratic Party in the 1990s and later a member of the European Parliament...
' candidature.

Jaan Kaplinski's mother was Estonian and his father Polish. His father Jerzy Kaplinski (lecturer in the Tartu University) was arrested by the NKVD and perished in a Soviet labour camp during the war. Jaan Kaplinski has a daughter Maarja from the marriage to his first wife Küllike. He has four sons, including Lauris Kaplinski and the composer
Composer
A composer is a person who creates music, either by musical notation or oral tradition, for interpretation and performance, or through direct manipulation of sonic material through electronic media...
Märt-Matis Lill. Jaan's second wife Tiia Toomet is also a writer.