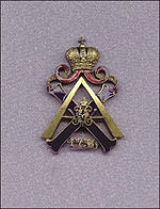 Encyclopedia
Izmaylovsky Regiment was one of the oldest regiment
Regiment
A regiment is a major tactical military unit, composed of variable numbers of batteries, squadrons or battalions, commanded by a colonel or lieutenant colonel...
s of the Russian army
Imperial Russian Army
The Imperial Russian Army was the land armed force of the Russian Empire, active from around 1721 to the Russian Revolution of 1917. In the early 1850s, the Russian army consisted of around 938,731 regular soldiers and 245,850 irregulars . Until the time of military reform of Dmitry Milyutin in...
, a subdivision of the 1st Guards Infantry Division
1st Guards Infantry Division (Russian Empire)
The 1st Guards Infantry Division of the Russian Imperial Guard comprised two brigades: the first with the Preobrazhensky Regiment and the Semenovsky Regiment , and the second, with the Izmaylovsky Regiment and the Guards Jäger Regiment...
of the Imperial Russian Guard. It was formed in Moscow
Moscow
Moscow is the capital, the most populous city, and the most populous federal subject of Russia. The city is a major political, economic, cultural, scientific, religious, financial, educational, and transportation centre of Russia and the continent...
on 22 September 1730. The first colonel of the regiment was appointed Adjutant general
Adjutant general
An Adjutant General is a military chief administrative officer.-Imperial Russia:In Imperial Russia, the General-Adjutant was a Court officer, who was usually an army general. He served as a personal aide to the Tsar and hence was a member of the H. I. M. Retinue...
Count Karl Gustav von Löwenwolde
Karl Gustav von Löwenwolde
Count Karl Gustav von Löwenwolde was a Russian diplomat and military commander.Native of German speaking population of Livonia. Son of General Gerhard Johann von Löwenwolde and Magdalene Elisabeth von Löwen and brother to knight of the Order of St...
. After him, only member of the Imperial family were chiefs of the regiment.

On 17 March the regiment was renamed to Lifeguard His Imperial Highness Konstantin Pavlovich regiment and then on 28 May of the same year to Lifeguard His Imperial Highness Nikolai Pavlovich
Nicholas I of Russia
Nicholas I , was the Emperor of Russia from 1825 until 1855, known as one of the most reactionary of the Russian monarchs. On the eve of his death, the Russian Empire reached its historical zenith spanning over 20 million square kilometers...
regiment. The original name was returned in 1801. The regimental church was Trinity Cathedral, Saint Petersburg where its military ensigns were kept.