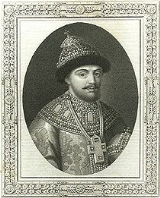 Encyclopedia
Feodor III Alexeevich of Russia (in Russian
Russian language
Russian is a Slavic language used primarily in Russia, Belarus, Uzbekistan, Kazakhstan, Tajikistan and Kyrgyzstan. It is an unofficial but widely spoken language in Ukraine, Moldova, Latvia, Turkmenistan and Estonia and, to a lesser extent, the other countries that were once constituent republics...
: Фёдор III Алексеевич) (9 June 1661 – 7 May 1682) was the Tsar
Tsar
Tsar is a title used to designate certain European Slavic monarchs or supreme rulers. As a system of government in the Tsardom of Russia and Russian Empire, it is known as Tsarist autocracy, or Tsarism...
of all Russia
Tsardom of Russia
The Tsardom of Russia was the name of the centralized Russian state from Ivan IV's assumption of the title of Tsar in 1547 till Peter the Great's foundation of the Russian Empire in 1721.From 1550 to 1700, Russia grew 35,000 km2 a year...
between 1676 and 1682.

Fyodor was born in Moscow
Moscow
Moscow is the capital, the most populous city, and the most populous federal subject of Russia. The city is a major political, economic, cultural, scientific, religious, financial, educational, and transportation centre of Russia and the continent...
, the eldest surviving son of Tsar Alexis
Alexis I of Russia
Aleksey Mikhailovich Romanov was the Tsar of Russia during some of the most eventful decades of the mid-17th century...
and Maria Miloslavskaya
Maria Miloslavskaya
Maria Ilyinichna Miloslavskaya was the first wife of tsar Alexis of Russia and mother of the tsars Feodor III of Russia and Ivan V of Russia, as well as regent princess Sophia Alekseyevna.-Biography:...
. In 1676, at the age of fifteen, he succeeded his father on the throne. He was endowed with a fine intellect and a noble disposition; he had received an excellent education at the hands of Simeon Polotsky, the most learned Slavonic monk of the day, knew Polish
Polish language
Polish is a language of the Lechitic subgroup of West Slavic languages, used throughout Poland and by Polish minorities in other countries...
, and even possessed the unusual accomplishment of Latin
Latin
Latin is an Italic language originally spoken in Latium and Ancient Rome. It, along with most European languages, is a descendant of the ancient Proto-Indo-European language. Although it is considered a dead language, a number of scholars and members of the Christian clergy speak it fluently, and...
; but, horribly disfigured and half paralyzed by a mysterious disease, supposed to be scurvy
Scurvy
Scurvy is a disease resulting from a deficiency of vitamin C, which is required for the synthesis of collagen in humans. The chemical name for vitamin C, ascorbic acid, is derived from the Latin name of scurvy, scorbutus, which also provides the adjective scorbutic...
, he had been a hopeless invalid from the day of his birth. He spent most of the time with young nobles, Yazykov and Likhachov, who would later introduce the Russian court to Polish ceremonies, dress, and language.

On 28 July 1680 he married a Ukranian noblewoman Agaphia Simeonovna Grushevskaya, daughter of Simeon Feodorovich Grushevsky and wife Maria Ivanovna Zaborovskaya, and assumed the sceptre. His native energy, though crippled, was not crushed by his terrible disabilities; and he soon showed that he was as thorough and devoted a reformer as a man incompetent to lead armies and obliged to issue his orders from his litter, or his bed-chamber, could possibly be. The atmosphere of the court ceased to be oppressive; the light of a new liberalism shone in the highest places; and the severity of the penal laws was considerably mitigated. He founded the academy of sciences
Slavic Greek Latin Academy
Slavic Greek Latin Academy was the first higher education establishment in Moscow, Russia.-Beginnings:...
in the Zaikonospassky monastery
Zaikonospassky monastery
The Zaikonospassky monastery was a monastery in Kitai-gorod, Moscow, just one block away from the Kremlin.It was founded in 1600 by Boris Godunov...
, where everything not expressly forbidden by the Orthodox church
Russian Orthodox Church
The Russian Orthodox Church or, alternatively, the Moscow Patriarchate The ROC is often said to be the largest of the Eastern Orthodox churches in the world; including all the autocephalous churches under its umbrella, its adherents number over 150 million worldwide—about half of the 300 million...
, including Slavonic, Greek
Greek language
Greek is an independent branch of the Indo-European family of languages. Native to the southern Balkans, it has the longest documented history of any Indo-European language, spanning 34 centuries of written records. Its writing system has been the Greek alphabet for the majority of its history;...
, Latin
Latin
Latin is an Italic language originally spoken in Latium and Ancient Rome. It, along with most European languages, is a descendant of the ancient Proto-Indo-European language. Although it is considered a dead language, a number of scholars and members of the Christian clergy speak it fluently, and...
and Polish
Polish language
Polish is a language of the Lechitic subgroup of West Slavic languages, used throughout Poland and by Polish minorities in other countries...
, was to be taught by competent professors.

The chief difference between the Fyodorean and the later Petrine reforms was that while the former were primarily, though not exclusively, for the benefit of the church, the latter were primarily for the benefit of the state. The most notable reform of Fyodor III, however, was the abolition in 1682, at the suggestion of Vasily Galitzine, the system of mestnichestvo, or "place priority
Mestnichestvo
In Russian history, Mestnichestvo was a feudal hierarchical system in Russia from the 15th to 17th centuries. Mestnichestvo revolved around a simple principle: the boyar who estimated that his origins were more ancient and his personal services to the tsar more valuable could claim a higher state...
", which had paralyzed the whole civil and military administration of Muscovy for generations. Henceforth all appointments to the civil and military services were to be determined by merit and the will of the sovereign, while pedigree (nobility) books were to be destroyed. Fyodor's first consort, Agaphia Simeonovna Grushevsky shared his progressive views. She was the first to advocate beard-shaving. On 21 July 1681, the Tsarina gave birth to her son, Tsarevich Ilya Fyodorovich, the expected heir to the throne. Agaphia died as a consequence of the childbirth three days later, on 24 July, and six days later, on 30 July, the nine-days-old Tsarevich also died.