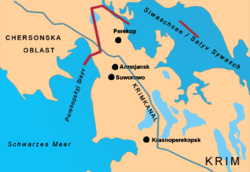 The Isthmus of Perekop is the narrow, 5-7 km wide strip of land that connects the peninsula
Peninsula
A peninsula is a piece of land that is bordered by water on three sides but connected to mainland. In many Germanic and Celtic languages and also in Baltic, Slavic and Hungarian, peninsulas are called "half-islands"....
of Crimea
Crimea
Crimea , or the Autonomous Republic of Crimea , is a sub-national unit, an autonomous republic, of Ukraine. It is located on the northern coast of the Black Sea, occupying a peninsula of the same name...
to the mainland of Ukraine
Ukraine
Ukraine is a country in Eastern Europe. It has an area of 603,628 km², making it the second largest contiguous country on the European continent, after Russia...
. The isthmus is located between the Black Sea
Black Sea
The Black Sea is bounded by Europe, Anatolia and the Caucasus and is ultimately connected to the Atlantic Ocean via the Mediterranean and the Aegean seas and various straits. The Bosphorus strait connects it to the Sea of Marmara, and the strait of the Dardanelles connects that sea to the Aegean...
to the west and the Azov Sea the east. The isthmus takes its name from the Tatar fortress of Perekop
Perekop
Perekop is a village located at the Perekop Isthmus connecting Crimean peninsula to the Ukrainian mainland. It is known for the Fortress Or Qapi that served as the gateway to Crimea...
.

The border between the Crimea republic and the Kherson Oblast
Kherson Oblast
Kherson Oblast is an oblast in southern Ukraine, just north of Crimea. Its administrative center is Kherson. The area of the region is 29000 km², its population is 1.12 million.Important cities in the oblast include:...
runs though the northern part of the isthmus. The cities of Perekop
Perekop
Perekop is a village located at the Perekop Isthmus connecting Crimean peninsula to the Ukrainian mainland. It is known for the Fortress Or Qapi that served as the gateway to Crimea...
, Armiansk, Suvorovo and Krasnoperekopsk
Krasnoperekopsk
Krasnoperekopsk is a city in Crimea, Ukraine which is located on the southern part of the Perekop Isthmus, on the shore of the Stare lake, and about from the Crimean capital, Simferopol...
are situated on the isthmus. The North Crimean Canal runs through the isthmus, supplying Crimea with fresh from the Dnieper River
Dnieper River
The Dnieper River is one of the major rivers of Europe that flows from Russia, through Belarus and Ukraine, to the Black Sea.The total length is and has a drainage basin of .The river is noted for its dams and hydroelectric stations...
.

South of Perekop, there are rich salt ores which still are very important commercially for the region.

The strategic and commercial value of this area, together with the strategic value of being the gateway to Crimea, has made the isthmus the location of some particularly fierce battles. Both ancient Greeks
Greeks
The Greeks, also known as the Hellenes , are a nation and ethnic group native to Greece, Cyprus and neighboring regions. They also form a significant diaspora, with Greek communities established around the world....
and Crimean Tatars
Crimean Tatars
Crimean Tatars or Crimeans are a Turkic ethnic group that originally resided in Crimea. They speak the Crimean Tatar language...
fortified the area, and in the 15th century the area was a colony of the maritime Republic of Genoa
Republic of Genoa
The Most Serene Republic of Genoa |Ligurian]]: Repúbrica de Zêna) was an independent state from 1005 to 1797 in Liguria on the northwestern Italian coast, as well as Corsica from 1347 to 1768, and numerous other territories throughout the Mediterranean....
. In 1783 the area became a part of Russia, and in 1954, together with Crimea it was transferred to the Ukrainian Soviet Republic. Since that time it has remained Ukrainian territory.

In November 1920, during the Russian Civil War
Russian Civil War
The Russian Civil War was a multi-party war that occurred within the former Russian Empire after the Russian provisional government collapsed to the Soviets, under the domination of the Bolshevik party. Soviet forces first assumed power in Petrograd The Russian Civil War (1917–1923) was a...
, a battle was fought here between Red Army
Red Army
The Workers' and Peasants' Red Army started out as the Soviet Union's revolutionary communist combat groups during the Russian Civil War of 1918-1922. It grew into the national army of the Soviet Union. By the 1930s the Red Army was among the largest armies in history.The "Red Army" name refers to...
and the White
White movement
The White movement and its military arm the White Army - known as the White Guard or the Whites - was a loose confederation of Anti-Communist forces.The movement comprised one of the politico-military Russian forces who fought...
troops of Baron Wrangel
Pyotr Nikolayevich Wrangel
Baron Pyotr Nikolayevich Wrangel or Vrangel was an officer in the Imperial Russian army and later commanding general of the anti-Bolshevik White Army in Southern Russia in the later stages of the Russian Civil War.-Life:Wrangel was born in Mukuliai, Kovno Governorate in the Russian Empire...
, who was still controlling the Crimea. The Red Army turned out victorious, but 140,000 civilians fled over the Black Sea to Istanbul
Istanbul
Istanbul , historically known as Byzantium and Constantinople , is the largest city of Turkey. Istanbul metropolitan province had 13.26 million people living in it as of December, 2010, which is 18% of Turkey's population and the 3rd largest metropolitan area in Europe after London and...
. This historical event was made into a 1968 propaganda film, Two Comrades Were Serving
Two Comrades Were Serving
Two Comrades Were Serving is a 1968 Soviet film directed by Yevgeni Karelov, script by Yuli Dunsky and Valeri Frid. The film is about the Russian civil war, in particular, the battle for the Crimean peninsula.- Plot :...
.

During Second World War, the combined forces of German and Romanian troops under the command of Erich von Manstein
Erich von Manstein
Erich von Manstein was a field marshal in World War II. He became one of the most prominent commanders of Germany's World War II armed forces...
entered Crimea though the Isthmus of Perekop. The battle of the isthmus lasted five days from 24 September 1941 before the isthmus was secured by the Axis forces. On 18 October 1941, the Axis forces advanced further into Crimea, leading to the Battle of Sevastopol
Battle of Sevastopol
The Siege of Sevastopol took place on the Eastern Front of the Second World War. The campaign was fought by the Axis powers of Germany, Romania and Italy against the Soviet Union for control of Sevastopol, a port in Crimea on the Black Sea. On 22 June 1941 the Axis invaded the Soviet Union under...
. On 9 May 1944, the Red Army regained control of Crimea.
The source of this article is wikipedia, the free encyclopedia.  The text of this article is licensed under the GFDL.