The nature of the relationship of the Balto-Slavic languages has been the subject of much discussion from the very beginning of historical Indo-European linguistics as a scientific discipline. A few are more intent on explaining the similarities between the two groups not in terms of a genetic relationship, but by language contact and dialectal closeness in the Proto-Indo-European period.

Baltic and Slavic share more close phonological
Phonology
Phonology is, broadly speaking, the subdiscipline of linguistics concerned with the sounds of language. That is, it is the systematic use of sound to encode meaning in any spoken human language, or the field of linguistics studying this use...
, lexical
Lexical (semiotics)
In the lexicon of a language, lexical words or nouns refer to things. These words fall into three main classes:*proper nouns refer exclusively to the place, object or person named, i.e...
, morphosyntactic and accentological similarities than do any other language groups within the Indo-European language family. The notable early Indo-Europeanist August Schleicher
August Schleicher
August Schleicher was a German linguist. His great work was A Compendium of the Comparative Grammar of the Indo-European Languages, in which he attempted to reconstruct the Proto-Indo-European language...
(1861) proposed a simple solution: From Proto-Indo-European descended Proto-Balto-Slavic, out of which Proto-Baltic and Proto-Slavic emerged. The Latvian linguist Jānis Endzelīns thought, however, that any similarities among Baltic and Slavic languages were a result of an intensive language contact, i.e., that they were not genetically related and that there was no common Proto-Balto-Slavic language. Antoine Meillet
Antoine Meillet
Paul Jules Antoine Meillet was one of the most important French linguists of the early 20th century. Meillet began his studies at the Sorbonne, where he was influenced by Michel Bréal, Ferdinand de Saussure, and the members of the Année Sociologique. In 1890 he was part of a research trip to the...
(1905, 1908, 1922, 1925, 1934), the distinguished French Indo-Europeanist, in reaction to a second simplified theory of Schleicher's, propounded a view according to which all similarities of Baltic and Slavic occurred accidentally, by independent parallel development, and that there was no Proto-Balto-Slavic language. In turn, the Polish linguist Rozwadowski suggests that the similarities among Baltic and Slavic languages are a result of not only genetic relationship, but also of later language contact. Thomas Olander corroborates the claim of genetic relationship in his research in the field of comparative Balto-Slavic accentology.

The Balto-Slavic languages are most often divided into Baltic and Slavic branches. However, another division was proposed in the 1960s by Vyacheslav Ivanov
Vyacheslav Vsevolodovich Ivanov
Vyacheslav Vsevolodovich Ivanov is a prominent Soviet/Russian philologist and Indo-Europeanist probably best known for his glottalic theory of Indo-European consonantism and for placing the Indo-European urheimat in the area of the Armenian Highlands and Lake Urmia.-Early life:Vyacheslav Ivanov's...
and Vladimir Toporov
Vladimir Toporov
Vladimir Nikolayevich Toporov was a leading Russian philologist associated with the Tartu-Moscow semiotic school. His wife was Tatyana Elizarenkova....
: that the Balto-Slavic proto-language split from the start into West Baltic, East Baltic and Proto-Slavic. Thus Ivanov and Toporov questioned not only Balto-Slavic unity, but also Baltic unity. In their framework, Proto-Slavic is a peripheral and innovative Balto-Slavic dialect which suddenly expanded, due to a conjunction of historical circumstances, and effectively erased all the other Balto-Slavic dialects, except in the marginal areas where Lithuanian
Lithuanian language
Lithuanian is the official state language of Lithuania and is recognized as one of the official languages of the European Union. There are about 2.96 million native Lithuanian speakers in Lithuania and about 170,000 abroad. Lithuanian is a Baltic language, closely related to Latvian, although they...
, Latvian
Latvian language
Latvian is the official state language of Latvia. It is also sometimes referred to as Lettish. There are about 1.4 million native Latvian speakers in Latvia and about 150,000 abroad. The Latvian language has a relatively large number of non-native speakers, atypical for a small language...
and Old Prussian developed. This model is supported by glottochronologic
Glottochronology
Glottochronology is that part of lexicostatistics dealing with the chronological relationship between languages....
studies by V.V.Kromer although both of the most recent computer-generated family trees have a Baltic node parallel to the Slavic node. Onomastic
Onomastics
Onomastics or onomatology is the study of proper names of all kinds and the origins of names. The words are from the Greek: "ὀνομαστικός" , "of or belonging to naming" and "ὀνοματολογία" , from "ὄνομα" "name". Toponymy or toponomastics, the study of place names, is one of the principal branches of...
evidence shows that Baltic languages were once spoken in much wider territory than the one they cover today, all the way to Moscow
Moscow
Moscow is the capital, the most populous city, and the most populous federal subject of Russia. The city is a major political, economic, cultural, scientific, religious, financial, educational, and transportation centre of Russia and the continent...
, and were later replaced by Slavic. 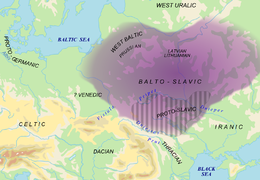 That sudden expansion of Proto-Slavic erased most of the idioms of the Balto-Slavic dialect continuum, which left us today with only two branches: Baltic and Slavic (or East Baltic, West Baltic, and Slavic in the minority view). This secession of the Balto-Slavic dialect ancestral to Proto-Slavic is estimated on archaeological and glottochronological criteria to have occurred sometime in the period 1500–1000 BCE.

The close relationship of the Baltic and Slavic languages is indicated by a series of exclusive isogloss
Isogloss
An isogloss—also called a heterogloss —is the geographical boundary of a certain linguistic feature, such as the pronunciation of a vowel, the meaning of a word, or use of some syntactic feature...
es representing innovations not shared with any other IE branch (especially in their phonology) and by the fact that one can establish the relative chronology of those innovations, which is the most important criterion for establishing genetic relationship in historical linguistics. The most important of these isoglosses are:


Common Balto-Slavic innovations include several other prominent, but non-exclusive isoglosses, such as the Satemization, Ruki
Ruki sound law
Ruki refers to a sound change in Balto-Slavic, Albanian, Armenian, and Indo-Iranian, wherein an original phoneme changed into after the consonants , , and the semi-vowels , , or:...
, change of PIE */o/ to PBSl. */a/ (shared with Germanic
Germanic languages
The Germanic languages constitute a sub-branch of the Indo-European language family. The common ancestor of all of the languages in this branch is called Proto-Germanic , which was spoken in approximately the mid-1st millennium BC in Iron Age northern Europe...
, Indo-Iranian
Indo-Iranian languages
The Indo-Iranian language group constitutes the easternmost extant branch of the Indo-European family of languages. It consists of three language groups: the Indo-Aryan, Iranian and Nuristani...
and Anatolian
Anatolian languages
The Anatolian languages comprise a group of extinct Indo-European languages that were spoken in Asia Minor, the best attested of them being the Hittite language.-Origins:...
branch) and the loss of labialization in PIE labiovelars (shared with Indo-Iranian, Armenian and Tocharian). A number of these, however, fit only in the relative chronology of other otherwise exclusive Balto-Slavic isoglosses, which makes them specific Balto-Slavic innovation.